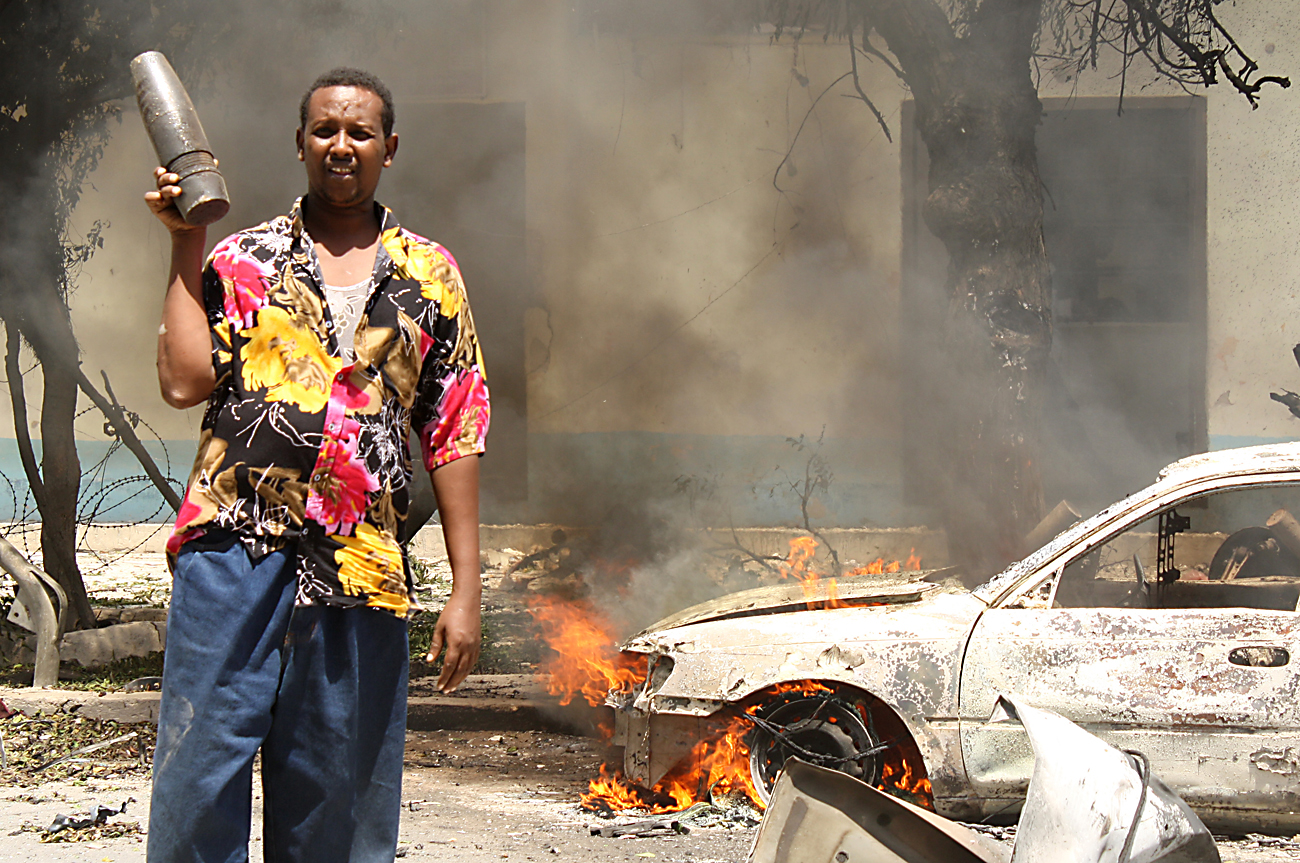 Somalia’s defence minister survived an assassination bid in the capital, Mogadishu, after a suicide bomber drove a car filled with explosives at his vehicle, injuring two security guards. More explosions went off as Yusuf Mohamed Siyad tried to help the wounded men. Things are getting very dangerous for ministers of the weak UN-backed moderate Islamist government, which recently went on the offensive against radical Islamist insurgents. It’s no wonder many Somali officials choose to live across the border in Nairobi. In December, a suicide bomber attacked a graduation ceremony for medical students, killing three ministers and another who died from his injuries last week. The main militant al-Shaabab group has just acknowledged it’s fighting with al-Qaeda in its global jihad. The group controls most of south and central Somalia, while the government is limited to a few blocks in Mogadishu protected by African Union peacekeepers.

Photo: A man holds an unexploded ordnance at the scene of a car bomb in Somalia’s capital Mogadishu, February 15, 2010. The bomb was targeting State Defence Minister Yusuf Mohamed Siyad, known by his nickname Indahaadde or “White Eyes” and it killed at least one bystander, residents said. REUTERS/Mowlid Abdi

Police fired tear gas to disperse thousands of anti-government protesters as demonstrations broke out following Ivory Coast President Laurent Gbagbo’s dissolution of both the government and the nation’s electoral commission. Gbagbo says the electoral commission fraudulently tried to add more than 400,000 people to the electoral roll, but opposition groups say he’s trying to neutralise voters in the Muslim north of the country. Ethnicity is a delicate subject in the world’s top cocoa producer, where descendants of many of the country’s neighbours have settled over the years. The issue led to a brief civil war that saw the country split in two after 2003, and politics has continued to delay an election since 2005. The World Bank says an election is necessary for comprehensive debt relief, but that doesn’t seem to worry Gbagbo, who has ordered the prime minister to name a new cabinet in coming days. The opposition says Gbagbo has effectively staged a coup, saying they won’t accept a new electoral commission. It can only get worse.

Vodafone has launched the “lowest-cost mobile phone on Earth” at the Mobile World Congress in Spain. It says the unit will sell for less than $15 (about R115), and is specifically targeting the developing world. The Vodafone 150 will first be marketed in India, Turkey and eight African countries, including Lesotho, Kenya and Ghana. The UN predicts the biggest cellphone market will be in the developing world, with users using phones for such tasks as banking and mobile health services. Cellphones are also an increasingly popular way to transfer and save money in poorer countries. A cellular money transfer system in Kenya has about 6 million customers.

A Libyan official says the country has stopped issuing entry visas to European citizens, apart from British nationals, giving no explanation for the move. Some diplomats think it’s because the Swiss recently banned about 180 Libyans from entering the country, after Libya prosecuted two Swiss businessmen for immigration- and business-related offences. The Libyan decision is said to have affected all the countries in the Schengen zone of Europe. The British may be exempted because major UK oil companies such as BP and Shell have been investing heavily in Libyan reserves, with many believe the deals are linked to the release of the only person ever convicted for the bombing of a jet over Lockerbie in Scotland in 1987, which killed 270 people.

The presidential candidate of Sudan’s former southern rebels, Yasir Arman, has launched his election campaign of the Sudan People’s Liberation Movement in the nation’s first multi-party elections in 24 years. Ironically, Arman is a northerner, and is most likely to be President Omar Hassan al-Bashir’s strongest challenger. The SPLM is targeting the country’s marginalised millions using the slogan “hope for change”. It wants to appeal to voters of different religions, in a nation that’s essentially split into a black African Christian and animist south, and a Muslim Arab north that fought a 22-year civil war ending in 2005. Currently, as part of a peace deal, the SPLM is a junior partner in a coalition government with the north’s ruling National People’s Congress. Arman says the SPLM supports “voluntary unity”, which refers to the possibility of holding a highly controversial referendum on independence for the oil-rich, but less populated, south in early 2011. Meanwhile, hundreds of protesters attended the funeral of a Darfuri student who colleagues say was abducted, tortured and killed by Sudanese authorities last week. Darfur, a western province of Sudan, has suffered a separate seven-year conflict that the UN says killed 300,000 people. The killing has further fuelled tensions ahead of elections.

Kenya’s prime minister wants former UN secretary general Kofi Annan to help resolve a row between the unity government’s main parties over the reinstatement of two ministers accused of corruption. The row began when Prime Minister Raila Odinga suspended the country’s agriculture and education ministers for three months, to allow independent investigations into corruption allegations in their ministries. Hours later, President Mwai Kibaki overturned the decision, saying he hadn’t been consulted, and that Odinga didn’t have the constitutional powers to suspend the two ministers. Annan has mediated in Kenya’s internal and external relations after the country lurched into crisis following the deaths of some 1,300 people in a 2007 election. The nation’s major parties are supposed to share power in order to bring peace, but Odinga claims the president overstepped his powers in an increasingly bitter row over corruption.