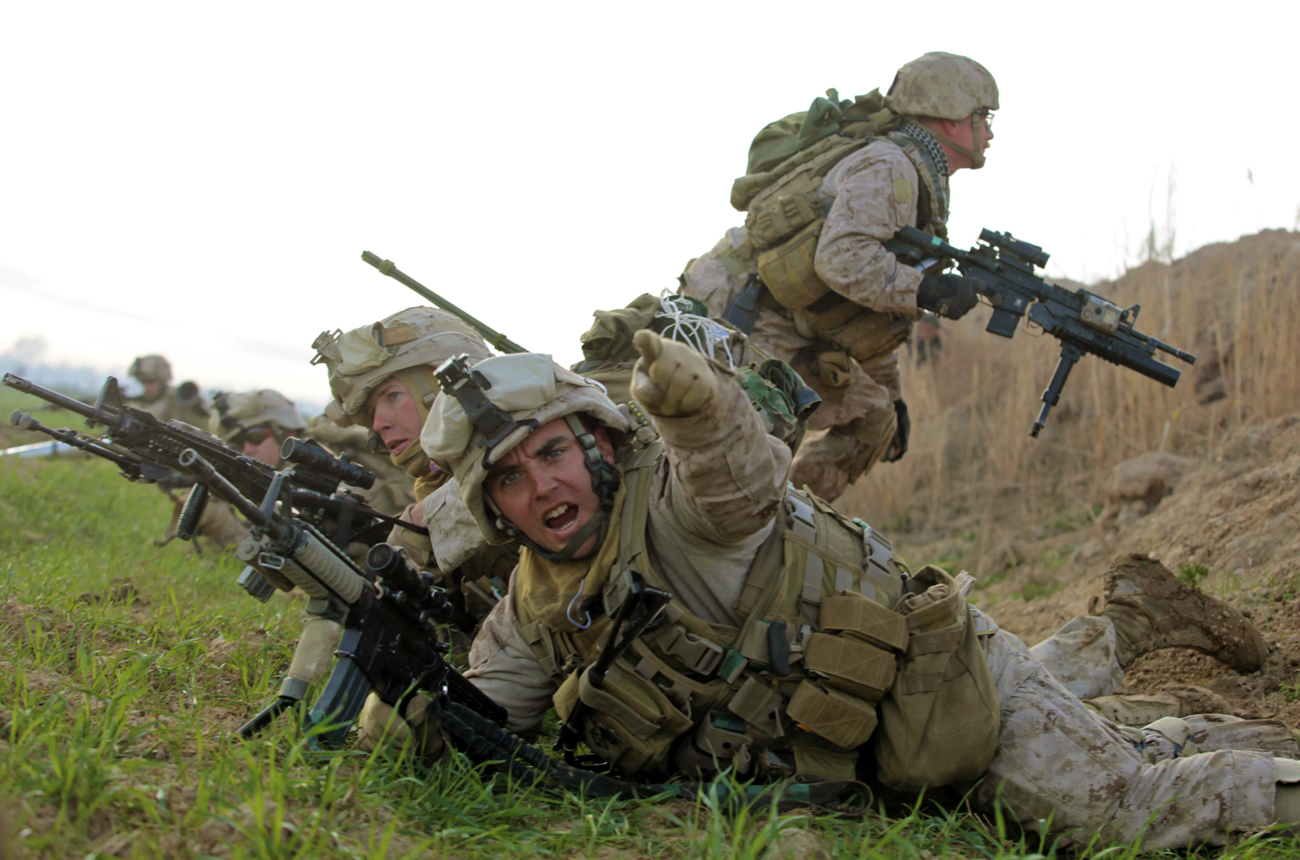 American and Afghan commanders say about a quarter of the 400 Taliban fighters estimated to be in Marjah have been killed, with a similar number fleeing the opium-producing town that gives the radical Islamist militants cash for its weapons. The biggest Nato offensive of the Afghan war has seen fierce fighting, as Taliban snipers shoot at US Marines and Afghan soldiers in street-to-street battles. It seems local people are assisting the allies in giving up Taliban positions and pointing out booby-traps, and that the remainder of their forces are finding it more difficult to feed and sustain themselves. The offensive aims to break the back of the group in one of its biggest strongholds, and enable the Afghan government to take control of the area and begin to provide services and development. US President Barack Obama committed another 30,000 US troops to the Afghan war to help provide a decisive outcome against the Taliban and al-Qaeda after some eight years of fighting. But the truth is that this is a guerrilla war, similar to that which bogged down the Soviet army for a decade in the 1980s, and the US can expect more of the same. Photo: Reuters.

Iran is becoming more of a military dictatorship according to US secretary of state Hillary Clinton. She says the country’s infamous Revolutionary Guard, which operates independently of the nation’s armed forces, appears to have gained so much wealth and power that it has effectively become the government. Her comments come after the US treasury said it was freezing the assets of the Guard wherever it can. The Guard is financially involved in Iranian missile development, oil and gas, major infrastructure, telecoms and nuclear technology, while playing a strong role in Iran’s internal politics. The Iranians have for years been playing a kind of bluffing game with members of the UN Security Council over their nuclear programme, threatening to enrich uranium to levels not required for peaceful energy purposes, while seeking to dictate the terms of importing enriched nuclear fuel from countries such as France, Russia and Britain.

Haitians gather themselves from aftershocks and tears start to flow

The aftershocks have finally ended for Haitians, and now the period of mourning has really begun, with funerals and memorial services taking place daily as rich, poor and the universally loved and hated become equal in mass burials. Haiti’s government now says more than 230,000 people died in the massive earthquake that hit the island earlier this year. This has forever changed the landscape of a country with a history of brutal slavery, and plagued by subsequent years of ruthless dictatorship under the Duvalier family and subsequent governments that couldn’t resolve the society’s endemic violence and corruption. There will be tears of grief for the dead, and tears of possible relief and acknowledgement that maybe, just maybe, the country of some 9 million people can break the cycle of its history.

During a visit to Russia, Israeli Prime Minister Binyamin Netanyahu called for crippling sanctions against Iran over its nuclear programme, saying that top Russian officials showed an understanding of the issue. Israel has long threatened to bomb Iran’s nuclear facilities in a deadly game of chess over the future of the Middle East. Russia, along with the Chinese, are members of the UN Security Council who have generally resisted calls for sanctions against the Iranian regime. But now even Russia is showing increasing frustration over Iran’s stated intent to proceed with ever higher levels of uranium enrichment, so Netanyahu is making political hay. The Israeli premier says Russian President Dmitry Medvedev understands the need to prevent Iran from obtaining nuclear weapons, saying this is driven by concerns of stability in the Middle East. Iran has expanded its nuclear programme over the years in defiance of five UN Security Council resolutions and three sets of UN sanctions, and the big powers fear that one day Israel may take matters into its own hands. Russia built Iran’s Bushehr atomic energy plant, so it has a special role in any future engagement with Tehran. For years the Russians resisted the notion that Iran wanted nuclear weapons. But now, they’re not so sure.

It’s something that should worry Vancouver and South Africa in 2010 once the hubbub of the Winter Olympics and Soccer World Cup dies down. Beijing hosted its own version of the Winter Olympics inside the National Stadium in Beijing, because the so-called Bird’s Nest of the 2008 Summer Games is now defunct, and Chinese authorities are trying to find ways to make the hugely expensive structure relevant to daily life in the nation’s capital. So, the “Happy Snow and Ice Season” will run all winter at the stadium, where the Chinese staged a fantastical opening ceremony for the 2008 Olympics. Recently, the stadium also held what was dubbed the world’s first and largest chocolate wonderland. But such creativity falls way short of the chest-beating and pomp that symbolised China’s re-awakening as a new world power during the Summer Games. Like many such structures around the world, the Bird’s Nest, which cost $450 million to build, and costs $15 million a year to maintain, is in danger of becoming the world’s largest white elephant. The steel-spaghetti structure has hosted opera, an international soccer match and a Jackie Chan concert since the Olympics ended, but visitors are now in serious decline, dropping from up to 30,000 a day to a meagre 300 to 400 tourists daily. You’d have thought they’d have built a dual-use university of sports sciences and playing fields, but the spending frenzy for the Olympics doesn’t seem to work that way.