What can South Africa learn from Greece's meltdown?

What can South Africa learn from Greece’s meltdown? 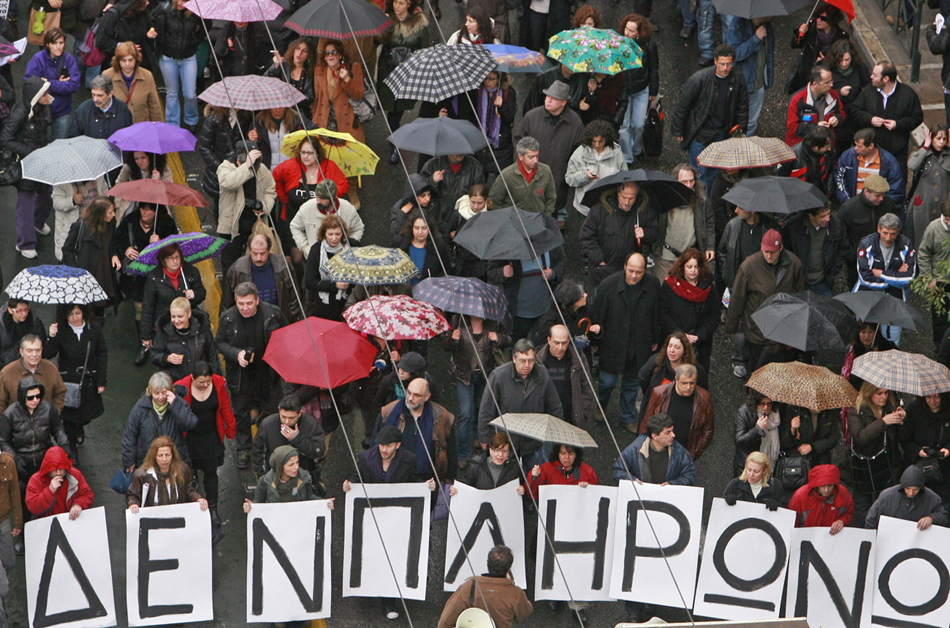 Greece finds itself in the odd position of being a news vortex these days. The country has become a symbol of a declining state and a prime example of a loser in the shifting sands of the economic meltdown. Where does South Africa stand in relation to Greece? Maybe an odd question, but no odder than the answer.

Comparing Greece to South Africa seems quixotic and arbitrary. Yet the comparison is weirdly instructive too, both on the positive and the negative sides of the coin.

And coin is the leading measure here. Would you believe, for example, that South Africa is a larger economic entity that Greece? When did that happen? How did that happen? How is it possible that a country which invented the democratic state could fall behind a fraught, divided, troubled African country that didn’t exist until thousands of years after Greece scholars forged the ideas by which most of the world currently lives?

The gross domestic product (GDP) of Greece (measured on a purchasing power parity basis) was set by the CIA “Factbook” at $339 billion last year. By the same measure at the same time, South Africa’s GDP is $489 billion – not only larger, but almost 50% larger.

However, before South African’s chests swell, consider this too; Greece has almost no people living below the poverty line. Almost half of South Africa’s population does. The average Greek is three times richer than the average South African.
South Africa’s larger economy is consequently, partly at least, merely a function of its higher population; 48 million people compared to the 11 million who control the islands where the odd notion of “western civilisation” was born.

Despite this comparison (or perhaps because of it), two differences and one similarity really stand out: the differences are economic trajectory and fiscal discipline; the similarity is corruption.

Take the good news first: the fiscal discipline of the new South African government is worthy of Spartan heroism compared to the lackadaisical attitude of modern Greece. The key issue is that Greece’s debt-to-GDP ratio was 113% last year and will rise to 125% next year – one of the highest in the world, and higher now than the famously disastrous Iceland, but less than the perennial global oddity, Japan.

South Africa’s comparable ratio is 35%. When SA’s debt-to-GDP ratio approached 60% early in the ANC’s term of office, South African economists had palpitations, issuing dire warnings of a debt trap, where the country would be progressively borrowing more just to repay its debts. Thankfully, those warnings were heeded.

However, behind this Olympian debt mountain in Greece lies the comparison that should worry every South African: growing corruption. This is the real reason – the not-so-secret secret – for the sudden need for a Greek bailout by the European Union. The bailout is necessary, not only because of the demise of Mediterranean property and tourism economy, but because the economic authorities lied.

The Economist notes: “Successive Greek governments have managed to hoodwink the European Union over the size of the country’s budget deficit and its public debt by blaming their predecessors and then promising to do better.

“No longer. The European Commission’s fury over a leap in the projected deficit for 2009 from 6.7% of GDP (the figure from the old centre-right New Democracy-led lot) to 12.7% (the figure produced by the new centre-left Pasok government) helped to trigger a collapse in the Greek bond markets and even provoke dire warnings that the country might go bust.”

And just as we were completing this story, The New York Times exposed how much Wall Street’s financial giants helped hide the real extent of Greece’s debts. In a way not dissimilar to home-owners getting a second mortgage during the height of sub-prime madness, Greek governments were paying for their then-current needs by mortgaging the country’s future. And Wall Street obliged, with Goldman Sachs leading the way. This, you hope and pray, will serve as a lesson to the ANC which condones creeping corruption everywhere. Allow corruption to get a solid grip, and it becomes ingrained. These days even some Greek doctors refuse to take credit cards; Hippocrates ought to have considered putting cheating the tax man in his oath as well.

Take a look at this tax revenue as a percentage of GDP graph drawn from www.gapminder.com : amazing to think that South Africans are more honest about paying their taxes than Greeks – and even as so much more is demanded of South Africans.

Yet, South African sanctimony about fiscal discipline only goes so far. South Africa’s fiscal deficit, the amount the government spends compared to what it collects, is about to jump to 8%. Keep that up for a few years and you’ll find yourself in a vortex such as the one in which Greece now languishes, being the first European Union country, the first member of the euro currency area, to go cap in hand to the International Monetary Fund, with all its hard-nosed economic doctors with their frightening hypodermics.

South Africa and Greece each have a saving grace the other does not have. Greece is part of the European Union, and so the other members are more or less obliged to bail out a member state to prevent contagion setting in – even though it represents only 2% of the economy of the union.

South Africa, meanwhile, has mineral wealth, which underpins its economy and which led to the 2004-2007 windfall. Mineral wealth continues to provide an economic support.

Yet in both cases, these saving graces are less significant than they seem. The EU will save Greece because it has to, but Greeks will lose autonomy of their economy. Photo: Market value of listed companies as percentage of GDP

Yet overall, you have to say, South Africa’s position might be worse, but its trajectory is better – so long as it holds to its current course. Greece’s maritime industry has been  largely obliterated by Asian rivals and it has rested on its tourism laurels for too long.

Both economies have been growing, but this graph shows how much more important the stock market has always been for South Africa, but also how much it has grown in importance over the past few years.

In so many ways Greece is in no way comparable to South Africa, yet in many other ways, the position could easily have been reversed: It might have been SA kneeling before the lords of the International Monetary Fund.

The comparison does show this: Your fiscal state is massively precious; don’t rely on a single industry; don’t let corruption get out of hand; don’t rely on larger “friends”, do it yourself.

Now, how many of those things is South Africa actually doing?

Photo: Protesters march during an anti-government rally in Athens February 10, 2010. A strike by Greek civil servants grounded flights and shut many state schools and offices on Wednesday, in the first big test of the government’s resolve to tackle a debt crisis which has shaken the euro zone.The plackards read “I do not pay”. REUTERS/John Kolesidis