A hydrogen gas station in every home? 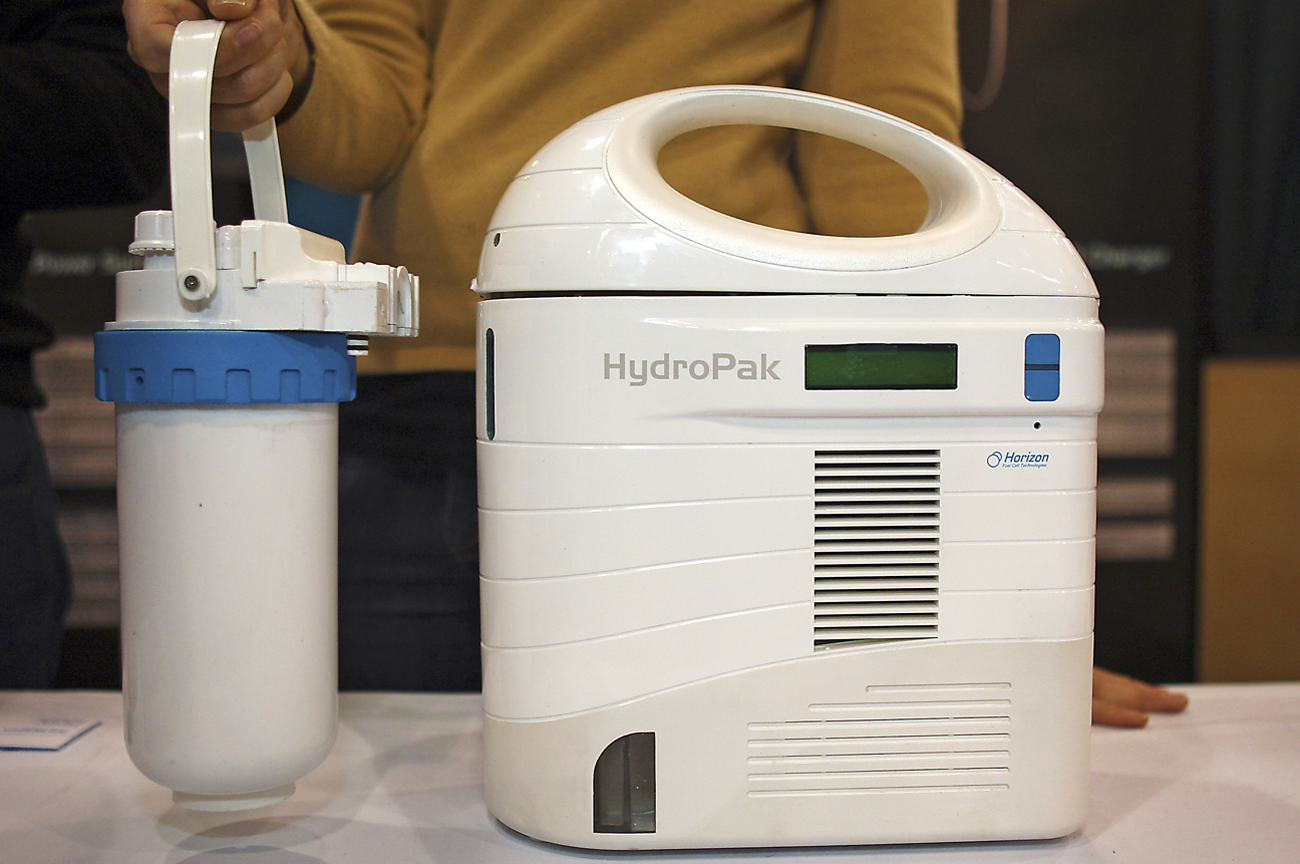 If it looks too good to be true, it probably is, even if it makes the news on CNN. But there is some value in your own “personal hydrogen power station”.

“It sounds like science-fiction, but it’s actually true. We’re taking hydrogen from water and storing it in a solid form in these types of cartridges.” That’s what Taras Wankewycz, vice president of business development at Singapore-based Horizon Fuel Cell Technologies, told CNN’s Kristie Lu Stout on Sunday – and the cartridge he held in his hand was about the size and shape of those old plastic film-spool cases you used to get. “So, for the first time in the world, we’re able to refuel our own hydrogen devices from our house.”

Wankewycz had what Stout called a “personal hydrogen power station” on the desk in front of him. It was much bigger than the cartridge, but smaller than a soccer ball. It had a circular clock-type face on it, which was lit up by a garish neon blue light. “What we’re going to do is put one of these in every home,” Wankewycz continued. “So that every home could become a gas station in the future.”

Come again? A possible solution to one of the planet’s biggest problems, provided by a device that looks like a next-generation pool filter?

“Okay, so how does it work?” Stout asked.

Wankewycz picked up the plastic bottle beside him, and explained that it takes normal water. He then screwed a cartridge into the middle of the clock-face, and a red light came on. The unit fired up automatically and bubbled with oxygen that was released out the top. “And then the hydrogen is sent into the cartridge under high pressure,” said Wankewycz. “But interestingly enough, the cartridge stores the hydrogen under low pressure, which means it’s a very safe way to carry the hydrogen.”

He had, it seemed, anticipated the Hindenburg question. As this polished front-man for the Singapore-based company assured the world, the device will not explode in your face.

Avoided for decades because of its bad rep, hydrogen has recently become a real alternative for carmakers eager to go green. A number of manufacturers have been experimenting with the technology, but none have so far overcome two key obstacles: first, hydrogen is unavailable at the pump, and second, it’s hugely expensive to produce. As of October 2009, for instance, Fortune magazine estimated the cost of producing Honda’s hydrogen-based Clarity at US$300,000 per car.

So is Wankewycz’s device as cheap as it looks? Stout, who’s a guest-blogger for Boing Boing when she’s not working as anchor and correspondent for CNN International, wrote the following on Monday morning: “No word yet on the cost. Online chatter puts it at about US$200 for the whole kit, but Taras himself is mum on giving an exact number because he’s still in talks with retailers. He expects to have it on shelves at the end of the year.”

There’s a big catch here, of course. The device only pumps out 2.5 watts of power, and the standard car engine produces on average a hundred kilowatts. By those calculations, it would take barrel loads of refillable cartridges just to get to the corner shop. So Horizon Fuel Cell Technologies is starting small, and offering products that use cartridges to power smart-phones, lights and remote-control toy cars.

Still, if the “hydrogen economy” is ever to become a reality, as Wankewycz suggests it will, the car companies are going to need some help.

Asteroid doomsday, aka Armageddon, 2036: for sure say Russians, maybe not says NASA