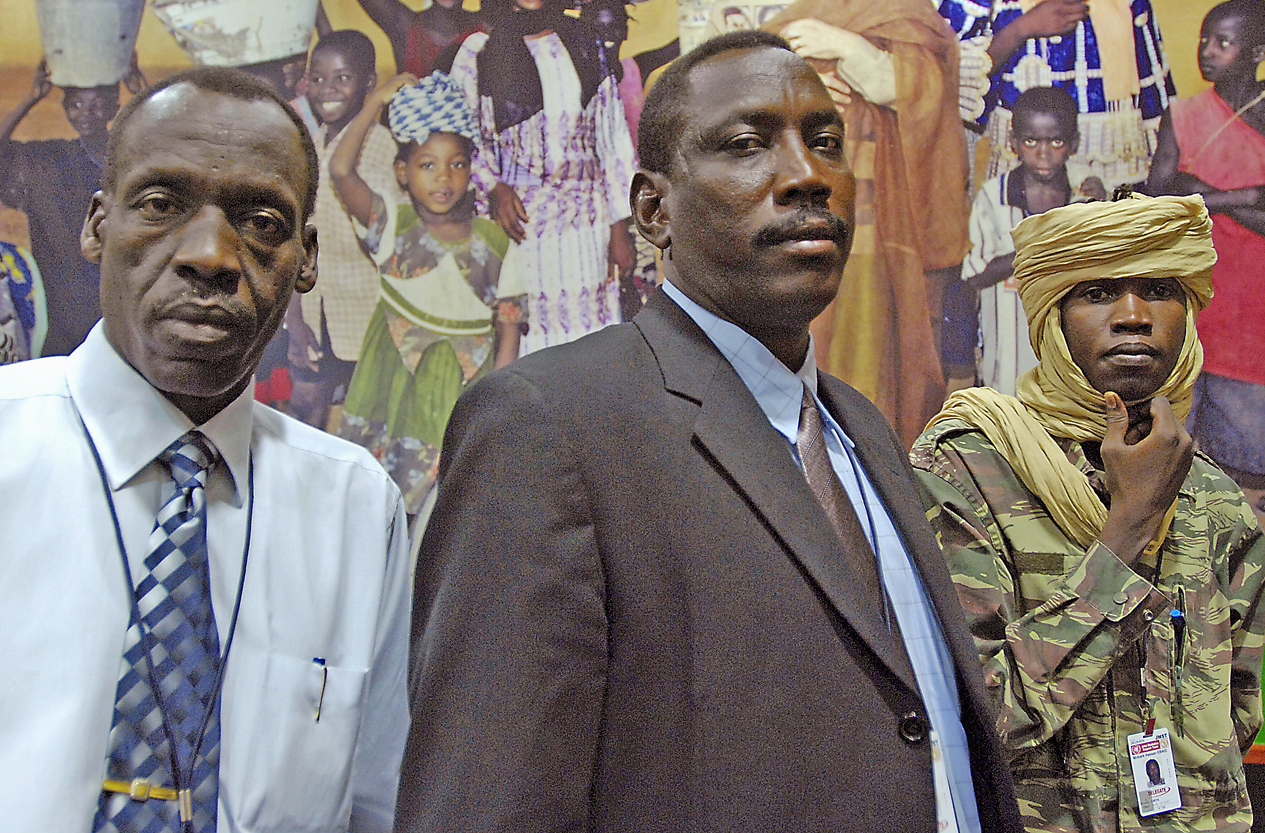 International Criminal Court judges ruled there’s not enough evidence to support the trial of Darfur rebel leader Bahar Idriss Abu Garda, accused of planning the deaths of 12 African Union peacekeepers in the region. He was a senior member of the Justice and Equality Movement, the main rebel group fighting Arab militias suspected of being supported by Sudan’s government, before he formed his own group, the United Resistance Front. Abu Garda has always denied being part of the attack on the peacekeepers. Photo: Reuters

Reuters reports that mortars in Somalia’s capital Mogadishu killed at least nine civilians, injuring many others, as government forces targeted the radical Islamist al-Shabaab group, who say they’re linked to al-Qaeda. An eye-witness told the news agency he saw dead and injured militants after the shells flattened houses used by local and foreign rebels. It’s usually African Union peacekeepers who are on the receiving end of rebel attacks, but Somalia’s UN-backed government recently indicated an offensive against al-Shabaab and smaller militia group, Hizbul Islam, was imminent.

Somali fishing boats pulled some 130 people from waters in the Gulf of Aden after they sailed from northern Somalia hoping to start a new life in the Middle East and beyond. The refugees said human traffickers forced them into the sea after their vessel developed engine problems. Six people are still missing and three are known to be dead, after the coast guard from the semi-autonomous region of Somaliland spotted survivors and dispatched fishermen who found them clinging to bits of driftwood. Fishermen co-exist uneasily with pirates and people traders off the Somali coast, and have formed vigilante groups to get back their hijacked boats.

Shortly after Chad and Sudan agreed to improve security on the their common border of Darfur, Chadian President Idriss Deby has shown signs of a further thaw in the relationship by visiting Sudan for the first time since 2004. Sudan claims Chad backs black African rebel groups in the region, while Khartoum is accused of supporting Arab militias active in eastern Chad. Seven years of fighting in Darfur has led the International Criminal Court in The Hague to issue an arrest warrant for Sudanese President Omar al-Bashir. He’s accused of war crimes and crimes against humanity that may soon see a genocide charge added. UN monitors say some 300,000 people have been killed in the ethnic conflict, with millions more displaced. Deby’s visit comes at a time when the violence in Darfur has cooled, ahead of Sudan’s first multi-party elections in more than two decades, following a 22-year civil war between the largely Arab north and black African south of the country.

Even the winner of Nigeria’s Anambra state gubernatorial election says the vote was subject to inadequate preparation, despite the Independent National Electoral Commission confirming his incumbency. Current governor Peter Obi was re-elected after only 300,000 people cast votes from an electorate of 1.8 million amid reports of vote-buying and ballot-box theft. Obi initially refused to vote when he discovered he was the only member of his family whose name appeared on the electoral roll. Reports say youthful gangs intimidated voters and stole ballot boxes from polling stations. The mayhem comes after Nigerian President Umaru Yar’Adua pledged to clean up the country’s notoriously corrupt state polls after he was elected in a widely-denounced national vote in 2007. Yar’Adua’s been absent for months, being treated for heart problems in Saudi Arabia. He’s to officially hand over power to his deputy Goodluck Jonathan after politicians and media barons said the nation was in danger of becoming ungoverned.

Egyptians arrest members of outlawed group that sits in parliament

Several members of Egypt’s Muslim Brotherhood have been arrested, including deputy leader Mahmoud Ezzat, in what’s seen as an attempt by government to roll back the group’s preparations for elections later this year. The party is banned from open political activity, and authorities frequently detain and imprison members, despite the Brotherhood having won 20% of seats in the 2005 parliamentary election; Brotherhood members stood as independent candidates, making it the country’s largest opposition group. The Brotherhood renounced violence in the 1970s, but Egyptian authorities fear it for its populist appeal, garnered by providing welfare to poor Egyptians in the form of healthcare, and books and subsidies for university students. It’s split between those who want to implement Islamic law in Egypt, and those who want it to be a party that promotes Islamic values in a democratic system.

Angolan President Jose Eduardo dos Santos says the country will pass a new law to end endemic corruption as he swore in a new government this week. He’s been on the warpath since Transparency International placed the country 162nd out of 180 countries in its 2009 corruption index. Angola is rich in oil, gas and diamonds among other minerals, but parliament is dominated by Dos Santos’s Popular Movement for the Liberation of Angola, the party that won the nations’ 26-year civil war. It unilaterally approved a new constitution last week that critics say will allow dos Santos to prolong his 30-year unelected rule. The new constitution is meant to enable dos Santos to be more hands-on in what’s essentially a one-party state, as he tries to discourage those who want to use public money as a source of personal enrichment.

Zimbabwe opposition politician Roy Bennett’s terrorism trial has been postponed indefinitely as court workers joined a wage strike by government employees. Bennett, a close ally of Movement for Democratic Change leader Morgan Tsvangirai, is charged with funding a 2006 plot to bring down the government of President Robert Mugabe, by assassinating key officials. Bennett denies the charges, which carry a possible death sentence. Tsvangirai is prime minister in Zimbabwe’s fragile unity government, but Mugabe has refused to appoint Bennett as a deputy agriculture minister, saying the courts should clear him first.