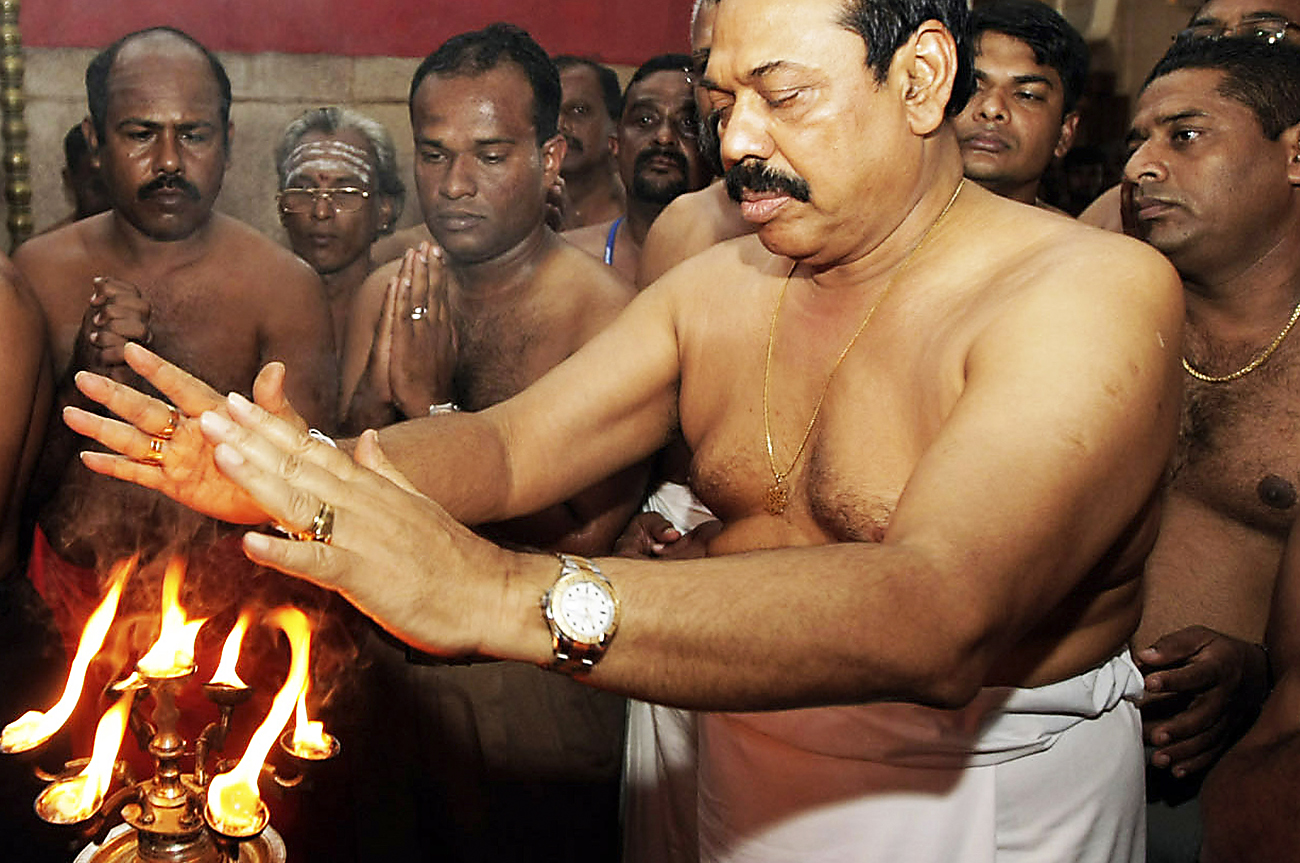 After much aggressive posturing, Sri Lankan President Mahinda Rajapaksa has had his rival in the country’s recent presidential election arrested. General Sarath Fonseka, the former head of the Sri Lankan army, was beaten by Rajapaksa last month by six million votes to four million. The army subsequently surrounded his headquarters in an upmarket Colombo hotel after he rejected the results and said he’d challenge them in court. The government has now accused Fonseka as “committing military offences”, after seeking legal advice against him on charges of plotting to overthrow the administration. Authorities say Fonseka’s actions are still bound by military law, despite his retirement from the armed forces. Fonseka and Rajapaksa were former allies in defeating Tamil Tiger rebels last year after a protracted civil war. Things change, don’t they? Photo: Reuters.

Even Russia, which once stood to benefit from Iran’s nuclear programme, is sick of the President Ahmadinejad’s lies and prevarication, after he told the UN’s International Atomic Energy Agency it would begin enriching uranium for use in a medical reactor. Years have gone by and there has been little in the way of agreement over sanctions among the big powers. Now Russia, the US and France are threatening to act against Tehran. Iran says it will begin enriching uranium up to 20%, more than is needed for civilian use. But China is still holding out for a diplomatic resolution, so the rhetoric will increase, along with the political temperature. But not much will happen while the Chinese use the issue to pressure the US over trade and censorship.

Dubai’s soaring space needle closes, but nobody tells why

Dubai’s soaring Burj Khalifa skyscraper has been closed to the public a month after its grand opening. And now, there are doubts over whether it will soon house its first tenants. Officials blame electrical problems for the closure of the building’s viewing platform, nearly a kilometre high in the sky. But the owners are keeping their cards close to their chests over whether the entire spire of 160 storeys has been hit by the shutdown. That’ll put a damper on tourist arrivals in the Emirate, as some visitors say they’re primarily there to ascend the 823 metre edifice. There are suspicions that security worries are to blame for the closure, after construction workers said they’re unaware of any technical problems. But nobody’s saying anything.

It’s a very small gesture, but giant bank JPMorgan Chase, one of the winners of the collapse of Wall Street, has given $30,000 to the Republican Party, a move contrary to CEO Jamie Dimon’s usual support for the Democratic Party. This obviously reflects unhappiness over President Barack Obama’s proposals to rein in banks after they were seen to have precipitated the October 2008 market crash by engaging in risky lending practices. At the time of his election, Obama helped the Democrats raise record funds on Wall Street, but now Dimon and other financial titans have become the primary lobbyists against Obama’s regulatory agenda. As they say, a week is a long time in politics, but a day is even longer.

British opposition leader David Cameron has taken off the gloves ahead of a UK general election in mid-year, accusing Prime Minister Gordon Brown of protecting Labour MPs charged with fiddling with their expenses. Last year the British press savaged parliamentarians for abusing their privileges, by spending taxpayer-funded allowances on personal gain. Three MPs were subsequently suspended, but Cameron now says Brown is complicit in their trying to evade justice. Lawyers say the MPs might claim that their statements surrounding the expense claims are covered by parliamentary privilege, and thus can’t be used against them. But such is public anger over the scandal that all Britain’s main parties have criticised this approach. A Conservative peer also faces charges of false accounting, which carries a maximum seven years’ in prison. So, Cameron trying to score points by playing the Devil’s Advocate. Or, as they say, attack is the best defence.

Former British foreign secretary Jack Straw says ministers in former Prime Minister Tony Blair’s cabinet weren’t prevented from discussing legal issues around the invasion of Iraq. The highly unpopular decision to oust Saddam Hussein is currently the subject of a bitter public enquiry, over whether advice by former Attorney General Lord Goldsmith was legal three days before the invasion. Former Blair ally Clare Short, who was International Development Secretary at the time, told the commission she was jeered at when she questioned the decision to go ahead. In his second appearance at the Iraq inquiry, Straw denied her claim, saying the use of force was justified by UN accords on Iraq dating back to 1991 and that cabinet members were allowed to speak their minds. Yeah, right.