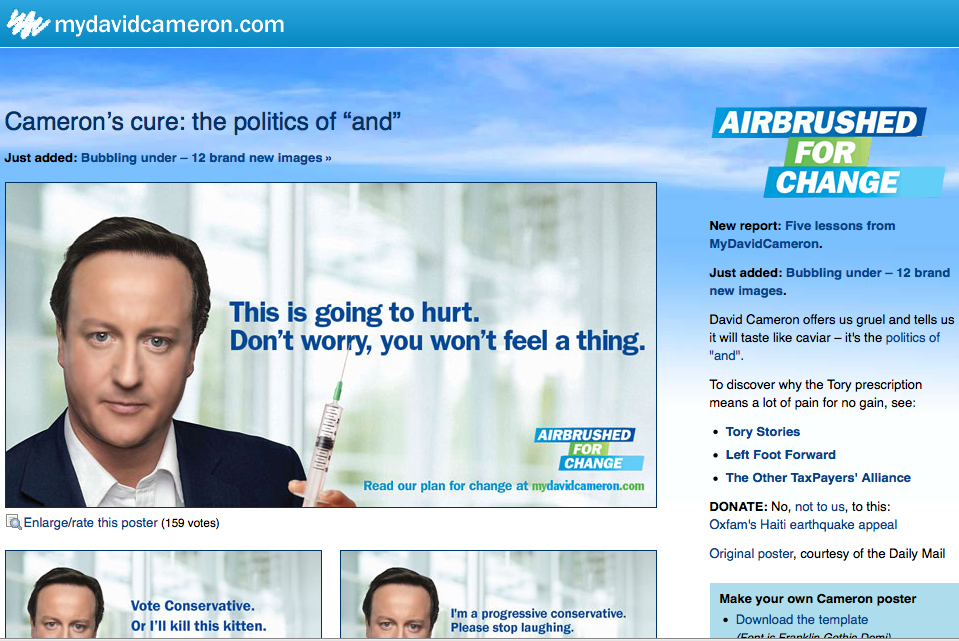 Here at The Daily Maverick we have spotted a new political campaign trend. Create truly awful, enhanced reality ads to ensure your candidate is remembered – even if for the wrong reasons.

Months before an actual election, ads in the UK and US reduce their own candidates to ridicule. A UK poster for David Cameron features air-brushed better-than-ever skin while a California TV ad for Carly Fiorina offers a man dressed as wolf in sheep’s clothing – with spooky day-glow eyes and weird organ music.

The first example comes from the UK where a thoroughly airbrushed poster has already made David Cameron a figure of ridicule. Cameron, that bland-looking toff with pretty reasonable chances of unseating Gordon Brown and becoming the next prime minister, appears on his party’s newly unveiled poster with a much, much sharper, more resolute jaw, glowingly healthy skin, bright eyes and a fine head of burnished hair. The only problem is that his real, unadjusted mien has been appearing almost daily on television and in the papers for years, giving prospective voters and art critics numerous opportunities to compare the real David Cameron with the one manufactured by ad agency, Euro RSCG London.

Within hours of its release, spoof versions of the ad by independent satirists as well as the Labour Party appeared on the Internet. In the Labour version, the caption reads, “Is what you see what you’d get?” and adapted the original tagline on the Tory ad to “Airbrushed for change”.

Business communications consultant Sacha Deshmukh commented, “The public is crying out for open, honest dialogue, and airbrushing comes across as a metaphor for something bigger, like spin.” People can also create their own versions of the original poster when they visit MyDavidCameron. By Thursday, close to 200,000 people had checked out that site and generated 185,000 variants of the now-maligned poster, including versions bearing captions like: “Government of the rich, by the rich, for the rich,” and “Some of my best friends are poor.” (Should your world be gloomy today, visit the site. For a couple of minutes, you’ll forget all your troubles . – Ed.)

A US-based marketing professor commented on this story on Advertising Age’s website. “Does anyone really want a political leader who…spends a fortune on designer suits and worries more about his or her hair than reading the paper? Reminds me of a former vice presidential candidate of ours [alluding to John Edwards in 2007, and his infamous $400 haircut] who (fortunately) did not make it to the White House…”

But wait, there’s more: Over in California, the campaign of Carly Fiorina, the former Hewlett Packard CEO and unsuccessful economic adviser to John McCain, for the Republican senatorial nomination has produced what is already being described as the worst campaign commercial ever. The TV commercial slams her main primary opponent, Tom Campbell, with spooky background music suitable for a Bela Lugosi or Boris Karloff B-movie, as well as an actor dressed as what is being described as a wolf portrayed as a demon sheep with day-glow eyes, with his objective a misled, frightened flock. The ad has already generated its own Twitter tag#, we kid you not.

Fiorina, Campbell and one other candidate are all vying for the opportunity to face off against long-time incumbent California Democratic senator Barbara Boxer in the November 2010 election. Boxer’s campaign has not announced whether it has a favourite animal for her campaign advertising yet.

Carly Fiorina is trying to market herself as THE candidate for “Carlyfornia”, but, after watching her new campaign ad on the Internet, is she really trying to engage in “Carlyfornication” of the voters instead (with apologies to the popular TV programme)?

So what were they all thinking, you might want to ask? The answer is, probably not much.

For more, if you dare, read Adage , New York Times or Mediaite’s The Man Behind Awesome ‘Demon Sheep’ Ad Is Revealed.