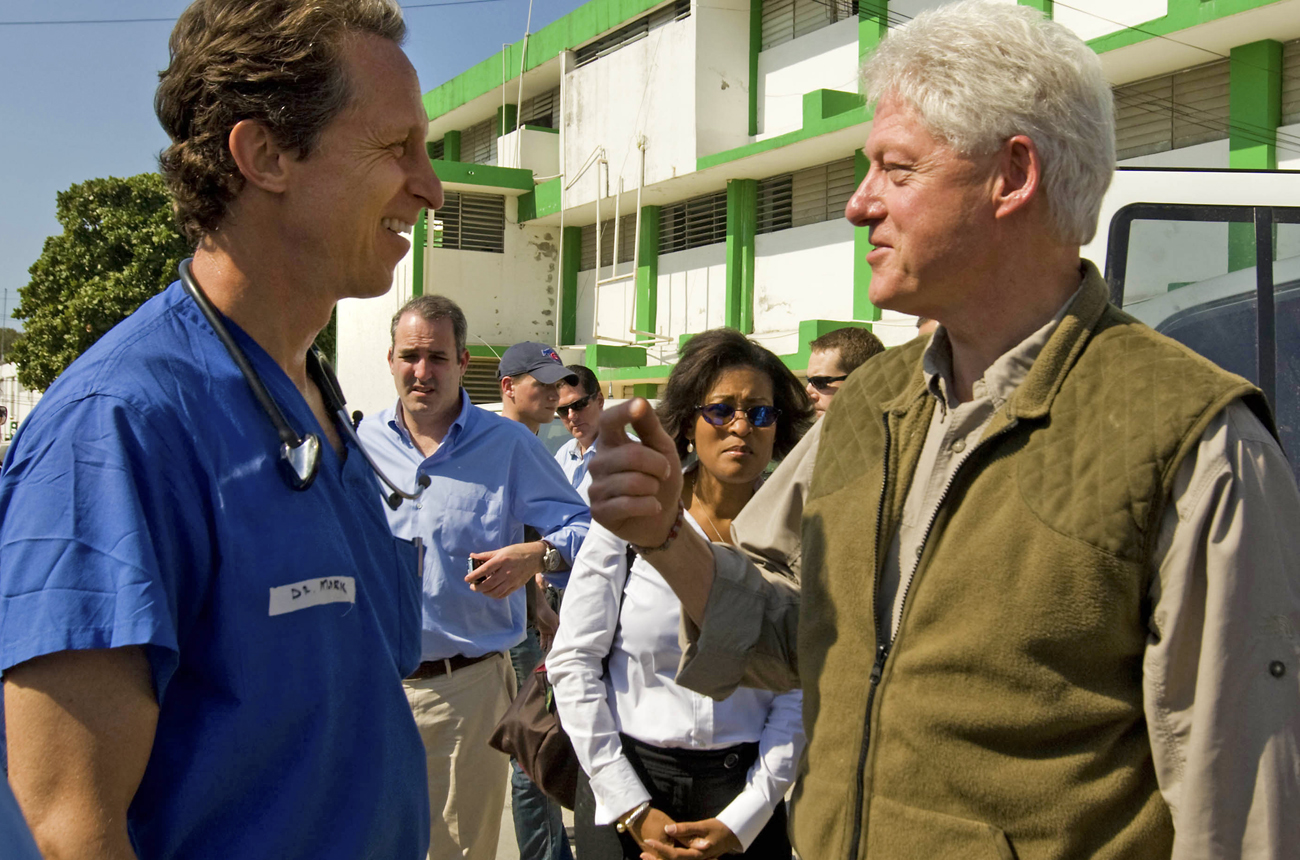 Former US President Bill Clinton always had a soft spot for Haiti. It underpinned his liberal values as a place that should thrive, despite a ghastly background in human trafficking. He’s currently the UN special envoy to the earthquake-devastated country, and will now also be international co-ordinator for relief efforts – or so some little birds say. The decision hasn’t been announced formally, which means that the UN will surprise everyone. But Clinton will be pleased to roll up his sleeves and co-ordinate aid, financial assistance and reconstruction. He’s already visited Haiti, and has seen the destruction first-hand. He’s also been to Davos, saying to world leaders that Haitians urgently need food and water, and funds to rebuild. Photo: Reuters.

President Barack Obama has touched a raw nerve of globalisation. Not everybody plays the currency game on the free market. That’s why China owns so much US debt, while effectively keeping American products out of its own market. It’s just not cricket, but it’s what drives the World Trade Oganisation rounds, and has put the US at a distinct competitive trade disadvantage. The US and China are arguing over trade in everything, from steel to poultry and vehicle tyres, but Obama won’t want to take a protectionist stance toward China; the move might kill the goose that is laying the golden eggs, and is just not the American way. The president wants China and other countries to open up their markets in reciprocal ways, and China’s yuan currency is on top of the White House agenda. A recent high-level report estimates the yuan is undervalued by about 30% against all world currencies, and about 40% against the dollar, giving the Chinese a huge advantage in the manufacture of exports. Obama hasn’t yet called China a currency manipulator, but many in the US want him to.

Russia’s influence in science is waning, and a brain-drain isn’t helping to resolve the problem. The country that once sent spaceships to all corners of the solar system and gave the US a run for its money in nuclear weapons and allied technologies has suffered suffering drastic science budget cuts since the collapse of the Soviet Union. Reports say funding for Russia’s best research institutes is only about 5% of that of comparable institutions in the US. It seems Rosneft, the state company holding the world’s largest oil and gas reserves, spends literally nothing on research and development. The Russians are still struggling to comprehend modern business, after more than seven decades of a command economy, and the exit of some 80,000 scientists to other countries hasn’t helped. One prominent Russian economist says managers behave as though they are working in the time of the rinderpest, while the average age for scientists and technologists is between 50 and 60 years old. Widespread corruption doesn’t help either, and in an economy that offers a few the chance to become rich, many young Russians are interested only in making money. For some, offers to help build weapons of mass destruction in some of the world’s less savoury states sure beats rotting at home.

Shortly after a suicide bomber killed CIA operatives working in Afghanistan, the US has again discovered how vulnerable it is to ad hoc attacks like the ones in Iraq. A roadside bomb has killed three US soldiers at a little-known American military training mission in the Al Qaeda and Taliban refuge of northwest Pakistan, a lawless tribal region near the Afghan that has been hard-hit by unmanned US missile strikes and a big push by the Pakistani army. The huge explosion also killed some girls at a nearby school, which won’t help the US win hearts and minds while it trains the paramilitary Frontier Corps of Pakistan’s army. The soldiers were due to attend the inauguration of another girls’ school, which had been renovated with US humanitarian assistance, when the bomb went off.

Many cancers are preventable, if you’ve got the money

At least 40% of cancers could be prevented if people stopped smoking, drinking, watched their weight and took regular exercise, a worldwide cancer group says. That’s a huge drop. But medical interventions can also help dramatically. The International Union Against Cancer (IUAC) says about 21% of all cancers are due to infections from common viruses, and hepatitis infections that cause cancer of the stomach and liver. Vaccines to prevent these cancers are widely available in western countries, but not for the nearly 80% who die of cervical cancer in poor countries. World Health Organisation statistics say cancer kills more people than Aids, tuberculosis and malaria combined. The IUAC says policymakers have an obligation to use such vaccines to save lives. Nice idea, but easy to say when you’re sitting in London or New York, and less easy when the medicines literally cost a cervix and a colon.

Swiss give lesson in micro-diplomacy

Here’s a microcosm of international diplomacy. The Swiss have approved the resettlement of two Guantanamo Bay detainees as part of a commitment to help US President Barack Obama’s administration close the jail in Cuba. But they’ll incur the wrath of the Chinese again, as the brothers are ethnic Uighur terrorist suspects who China says should face justice at home. Years of tension between China’s majority Han population and Muslim Uighurs in the Western region of Xinjiang have made Beijing highly sensitive to separatism. The Swiss offer comes at a time when Washington and China are fighting over everything from trade to US arms for Taiwan, and Google’s row over censorship and hacking in China. That such an issue can cause international ructions led Swiss Justice Minister Eveline Widmer-Schlumpf to claim that Switzerland’s decision to re-home the brothers was guided by humanitarian principles and not the preference of one country over another. But on the other hand, the Swiss are also in a dispute with US authorities over wealthy Americans who hide billions of dollars from the taxman. Go figure.

It’s not like it’s a chimpanzee, or a dog, but Iran has opened itself up to a new round of Western antagonism by firing a rocket into orbit with a crew of live animals including a rat, turtles and worms. The Iranian mullahs are keen to show their sceptical public just how great they are, despite huge economic problems at home brought on by their refusal to play ball with a globalising world. Now animal rights groups around the world will wade in after the country’s President Mahmoud Ahmadinejad said the launch showed the progress Iran was making in its space programme. The nation will soon send its first domestically-built satellite into orbit. Iran’s government reverts to vastly expensive show projects such as nuclear research development (which the West fears will lead to an atomic bomb), to impress at home, while cocking a snook at global regulatory authorities. Ahmadinejad appears to have now accepted a deal to swap enriched uranium for nuclear fuel, after years of telling big powers to take a leap. The White House described the rocket launch as “a provocative act”, on concern that Iran’s growing missile technology has possible links to its nuclear programme.