03 February: As spring sounds a tweet, groundhog takes to texting his predictions 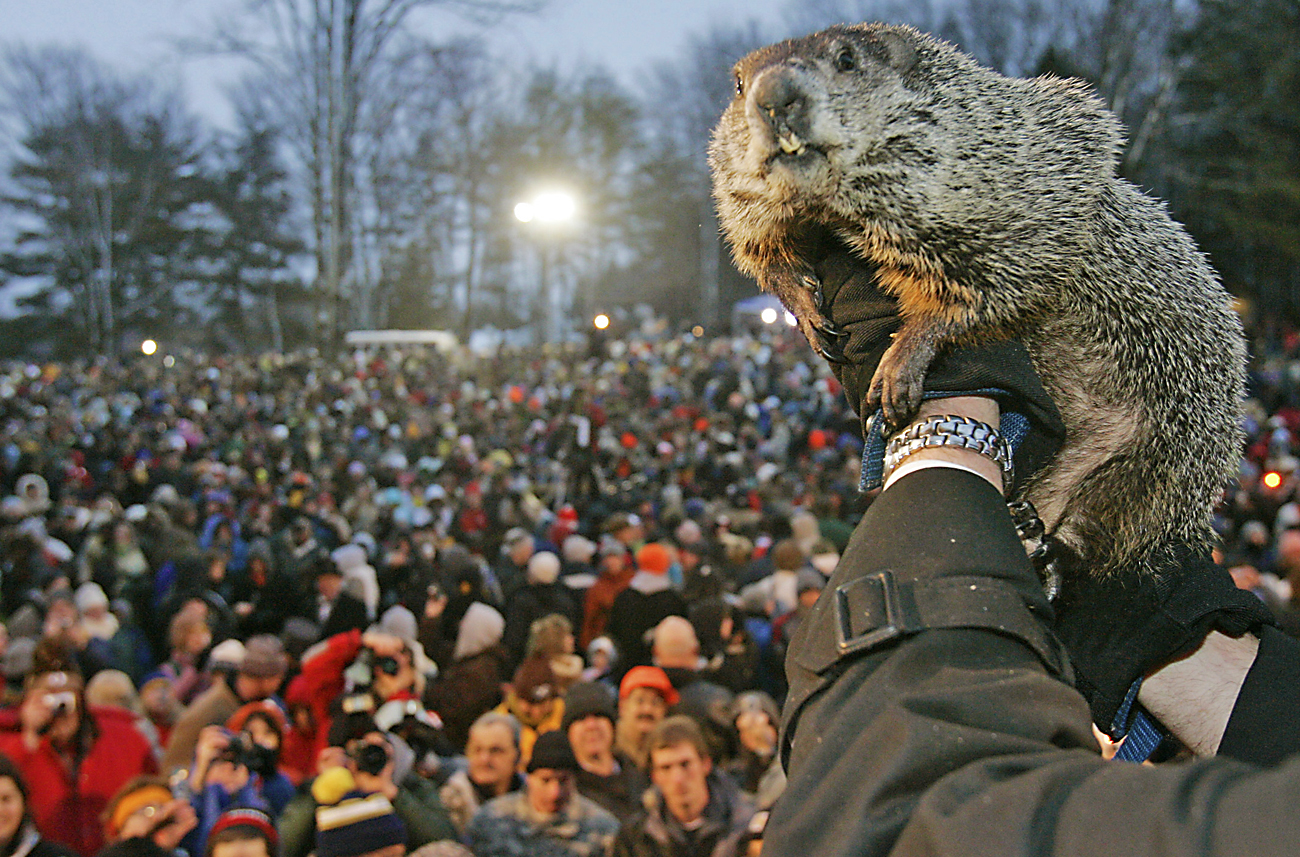 As spring sounds a tweet, groundhog takes to texting his predictions

Punxsutawney Phil has taken shadow-spotting to the next level. The iconic groundhog “saw” his shadow and within hours had SMSed and tweeted that winter was still around for another six weeks. It took a little while, because Phil still hasn’t got the hang of getting his claws around the various keypads, but he says he’ll do better next year.

US Military’s head honcho comes out the closet over gays

My, how times have changed. Must be because the Americans are fighting wars on all fronts and need the “manpower”. The US military’s top uniformed officer has come out the metaphorical closet and says gays should be allowed to serve openly in uniform. He reckons it’s the right thing to do – stressing it’s his opinion only – because he can’t stand that people have to lie about who they are in order to defend their fellow citizens. Too right. The issue turns on the 1993 “don’t ask, don’t tell” policy. President Barack Obama wants to ban the military’s policy of banning gays coming out into the open, so the statement by Admiral Mike Mullen, the chairman of the Joint Chiefs of Staff, and chief military adviser to Obama, has now opened up the debate. The murmur that greeted Mullen’s statement at the Senate Armed Services Committee hearing might have presaged a suppressed groan among Rambo-types. Mullen tweeted his feelings shortly afterwards.

Britain’s International Development Secretary Clare Short says Tony Blair’s cabinet was “misled” into thinking the war with Iraq was legal. As a senior politician, such prevarication comes easily when facing a public enquiry that’s still trying to defuse anger over the invasion of Saddam Hussein’s benighted country. In her favour, she quit the cabinet two months after the 2003 invasion, disagreeing with Blair. She also told the Iraq enquiry that UK Attorney General at the time, Lord Goldsmith, had been “leaned on” to change his advice before the invasion. She eventually told it straight when she said Blair and his allies did “everything on a wing and a prayer”. She’s trying to be loyal to former boss Tony, while at the same time rubbing his nose in it, saying she had been “conned” into staying on as a minister until the invasion. Sure thing, Clare, you never had a choice in the matter.

An Indonesian tobacco company has given a man $535 in compensation and paid all his medical costs after a cigarette he was smoking blew up in his mouth, taking out six of his teeth. The Indonesians smoke a demon of a cig called kretek, which is like puffing away on a raw, whole clove. The man says he’ll now try to quit smoking, after the Clas Mild exploded in his gob while riding a motorcycle. Reports don’t indicate whether he lost his teeth after hitting the tarmac, or from the force of the blast. He called the incident “unexpected”, and settled out of court. The tobacco firm isn’t planning on a cigarette recall.

Israeli police cordoned off beaches and ordered surfers out of the water after two explosive-laden barrels, ready-primed, washed up on shore. Palestinian militants say they’ve sent a whole load of these homemade sea-mines towards Israel’s beaches, to avenge the killing of a Hamas leader. They claim the bombs can be set off by remote detonation, and if they do explode, they’ll certainly do more damage than the average shark (attacks do happen in Israel once in a while). The militants say Israeli secret service agents stunned the Hamas boss with an electrical shock and then strangled him, so they’re back to targeting civilians as revenge. Charming place, the Middle East.

It simply had to happen. Call it the social aftershock from the magnitude 7.0 earthquake that rocked Haiti, killing possibly hundreds of thousands of people. The UN says 20 armed men tried to hijack a food convoy, but were driven off in a battle with police. So, now the predators are on the prowl, looking to make a quick speculative buck and ensure their own survival in the chaotic country. Authorities are worried because many jail-birds are still on the run after prisons collapsed, despite  dozens having been apprehended so far. The island state was already littered with ruthless gangs before the quake, but now any semblance of social stability is likely to go even further out the window.

Chinese Internet users don’t seem to care whether Google goes or stays over its censorship row with China’s government. That’s no real surprise in a country with few citizens’ rights and kids who’ve got more money than they’ve ever had before. But tens of thousands of complaints were received when the online fantasy game “World of Warcraft” was cancelled by authorities last year, so it’s pretty obvious what matters to China’s youthful surfers. One marketing exec says local Internet junkies can turn to Google’s Chinese search-engine competitor Baidu, and don’t really need the “international” flavour of Google’s offerings. It goes to show that China’s less than thirtysomethings, who make up some 62% of the nearly 400 million online market, will just try Bing or other search engines to get their second-by-second fix. How important is freedom of speech anyway?