Sponsored tweets: is Huffpost for real?

Sponsored tweets: is Huffpost for real? 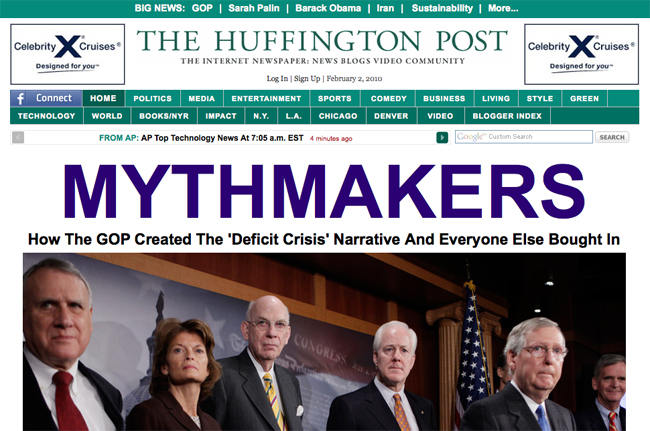 Either it’s getting desperate, or weird, or desperately weird, or we don’t understand what’s going on. The Huffington Post, according to the Wall Street Journal, is “selling advertising space to marketers who weigh in on articles via comments and tweets.” The sentence needs to be re-read a couple of times, and even then it isn’t entirely clear what’s up. Like, does posting a whack of comments to the Huffington Post website get an advertiser first dibs on a banner ad? Does a marketer who dedicates his days to re-tweeting Huffpost articles get a freebie after, say, a thousand tweets?

Unfortunately, if we’re getting this at all, it’s a bit more distressing than that. There’s a clue in the second paragraph of the WSJ piece. “[Huffington Post] have said that no advertisers have signed on yet and that it would help them figure out how to best inject their messages into relevant parts of the site.”

The reason Huffpost is doing it seems simple enough. President and chief revenue officer Greg Coleman, a former Yahoo and AOL executive who was brought in last year, has promised to finally make some serious profits out of the site’s prodigious stats (in September last year, according to Nielsen Media Matrix, Huffpost overtook Washingtonpost.com, raking in just under 9.5-million unique visitors).

Coleman, whose job description obviously has the word “target” all over it, intends to double revenue over the next year, and increase it by six-fold over the next three years. He’s stated as much on-the-record a number of times. So we can’t help but wonder who he’s trying to convince with the following statement:

“This kind of program could be used by any advertiser across the board. If you think of advertisers that want to sponsor the Super Bowl or the Academy Awards or even a discussion of Obama’s State of the Union speech, the opportunities are there. I could see fashion advertisers sponsoring a thread on the red carpet for the Oscars. A beer advertiser could sponsor a theme around a sports event. These are topics that people will be talking about and they’ll be engaged. And that’s where advertisers ultimately want to be.”

The quote, appropriately enough, was made during a conversation with a writer for paidContent.org. Neither the writer nor Coleman acknowledged (never mind answered) the obvious question: why would anyone want to read sponsored tweets or comments?

Never mind. At the bottom of both the paidContent and WSJ articles on the matter, the first comment – written by the same person, with the same wording – appeared to favour the idea. “I believe that paid messages DO have a place in online journals and blogs; after all, marketers are members of the community and want to have their opinion heard.”

Of course they do. Especially if, like the commenter above, they own a company that has recently launched a platform for sponsored comments.