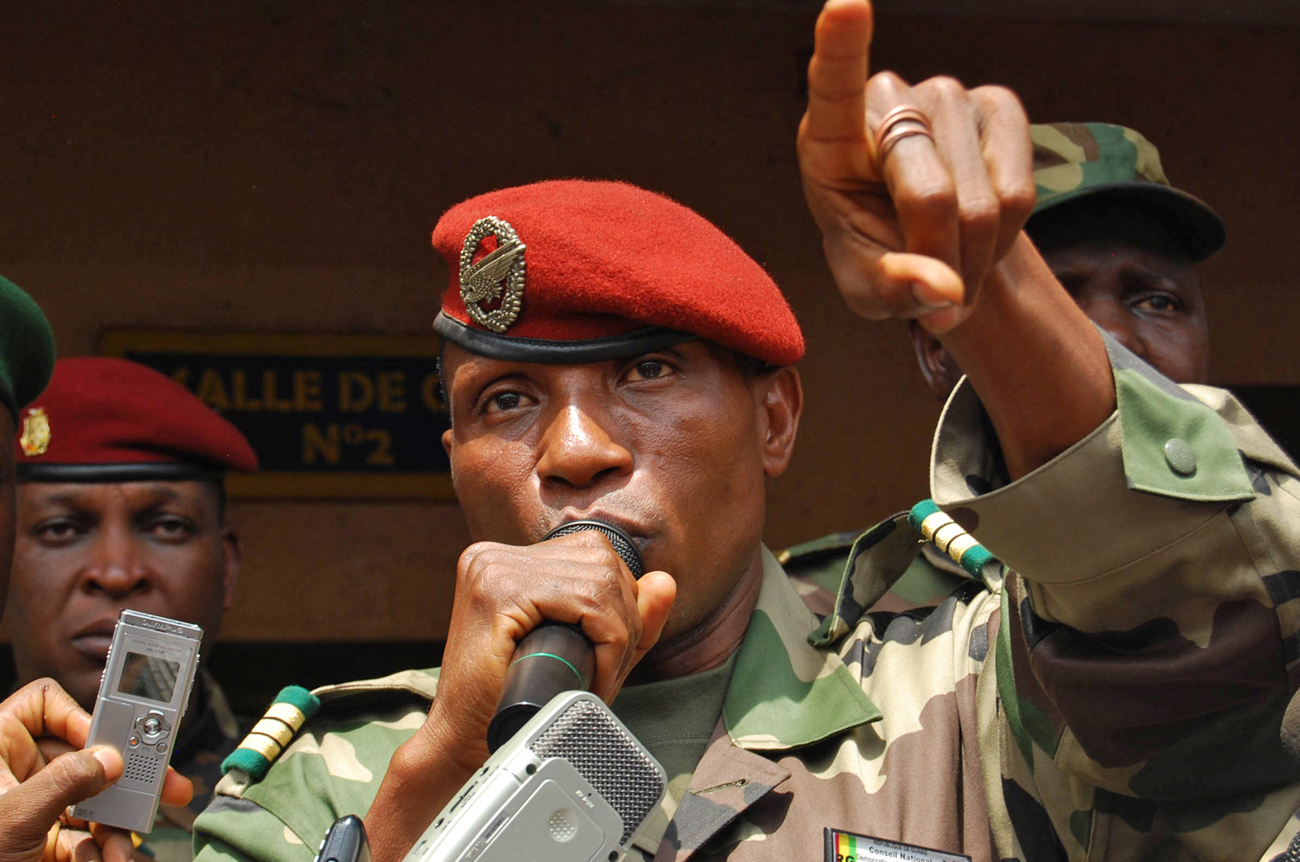 The African Union says Guinea’s military junta must hold democratic elections within six months, after Captain Moussa Dadis Camara took power in a coup in December 2008 following the death of long-time dictator Lansana Conte. Last year Camara’s troops killed some 200 people among 50,000 demonstrators protesting against his intention to run in presidential elections in 2010. Late last year Camara was shot in the head during an assassination attempt. Stand-in leader, General Sekouba Konate, was quick to appoint civilian politician Jean-Marie Dore as prime minister of a transitional government charged with implementing democratic rule. Camara is recuperating in Burkina Faso, whose President Blaise Compaore has been mediating the crisis. The AU slapped sanctions on junta leaders last October, but fears remain that the military is split between those who want Camara back and those who support elections. Photo: Reuters.

The activities of al-Qaeda and suspected proxies such as Somalia’s Islamist radical group al-Shabaab will fuel the agenda between African and Arab states in October at their first summit in more than 30 years. Al-Shabaab recently said it was swapping fighters with Islamist groups in Yemen, where Nigerian-born underpants bomber Umar Farouk Abdulmutallab received training and equipment for his attempt to blow up a plane over Detroit. The West is worried that al-Qaeda has established a presence both in the Horn of Africa and across the Maghreb region of the Sahara, and now the African Union is in on the act. The AU has 5,000 peacekeepers in Somalia’s capital Mogadishu, who regularly feel the sharp end of al-Shabaab attacks. Meanwhile, a row has broken out over attempts to extend Libyan leader Muammar Gaddafi’s one-year chairmanship of the AU, after the Southern African Development Community endorsed Malawi’s President Bingu wa Mutharika for the job. Gaddafi spent decades trying to unite the Arab world, and now wants a “United States of Africa”. Having his feet in both camps is bound to overshadow the summit.

Djibouti says it plans to send 450 troops to Somalia’s capital, Mogadishu, to aid some 5,000 African Union peacekeepers protecting the weak UN-backed government there. Ugandan and Burundian forces make up the bulk of the presence, suffering frequent suicide bomber, artillery and mortar attacks by Islamist militants. The AU is trying to bolster the number of soldiers beyond the 5,000 troops already present. Somali officials have for years called on the UN to send in the blue helmets to help stabilise a nation that has lacked functional central government since 1991. But the world body has baulked at that, saying it wants to see greater steps towards peace in a country that saw US forces badly beaten by militias in the early 1990s.

Top African Union diplomat Jean Ping says a vote for secession by oil-rich south Sudan in a 2011 referendum is a dangerously volatile issue ahead of multi-party national elections in 2010. The referendum will only take place if 50% plus one vote of Sudanese give it the green light, but conflicting parties have yet to agree on whether the threshold of registered voters will need to be 55%, 60% or 75%. The south of the country has much more oil, but far less infrastructure and people, and the AU fears a return to a 22-year north-south civil war which ended in 2005. Ping says the violence-ravaged western province of Darfur might try to follow the south to independence, which will add a whole new bag of problems.

Refugees lack food and water in parts of Sudan’s western Darfur province due to sparse rainfall in the region. Aid groups are stepping up efforts to reach millions of people displaced by the seven-year conflict, but authorities in the capital, Khartoum, have restricted activities of such organisations, leaving nearly 5 million people who rely on humanitarian aid in dire peril, according to UN and African Union peacekeepers. The International Criminal Court in The Hague has issued an arrest warrant for Sudan’s President Omar al-Bashir for war-crimes in Darfur, after mostly non-Arab rebels took up arms against the government in 2003. Reuters reports that the ICC now expects to add a charge of genocide against Bashir, after some 300,000 people died, and millions were displaced in the region.

Zimbabwe’s High Court has rejected a Southern African Development Community court ruling in 2008 that said white farmers should be allowed to return to their land. President Robert Mugabe’s land-reform programme has seen almost all white-owned land seized since 2000.The land reform is seen by opponents to have ruined the country’s agriculture and general economy. Mugabe’s Zanu-PF party claims the seizures were in retaliation for colonial rule, when whites took much of Zimbabwe’s best land, forcing black farmers onto less fertile ground. It’s not the first time the SADC ruling has been overturned and appealed.

Kenyans will do away with the job of prime minister that was created following post-election riots in 2007 that left some 1,300 people dead and hundreds of thousands homeless. President Mwai Kibaki and his principal political opponent, Prime Minister Raila Odinga, formed a power-sharing government as part of a deal to stabilise the country. They agreed to draft a new constitution, which will see the PM replaced by parliamentary checks and balances on the president and devolved powers of government. The power-sharing arrangement has always been prickly at best. The draft constitution will first be debated in parliament, before being put to a national referendum.

Morocco has turned its back on years of progress on human rights according to New York-based Human Rights Watch, by jailing journalists and terrorism suspects and hampering the movements of activists in the disputed territory of Western Sahara. That puts a dampener on its carefully crafted reputation of being a leading Arab human rights reformer, for which the EU gives it substantial aid. HRW cites the harassment of journalists and others who tackle corruption. One campaigner who supports independence for Western Sahara was refused entry to Morocco late last year. She was deported to Spain’s Canary Islands, where she began a hunger strike that endangered her life, subsequently returning home to house arrest.

World Bank president Robert Zoellick fears that unemployed youth from Sierra Leone’s more than decade-long civil war are a threat to the country’s nascent democracy. The World Bank has provided hundreds of millions of dollars for disarmament and reintegration programmes since the war ended in 2002, and now has added another $20 million for job creation. The Bank says 2006 figures show that 30% of men aged 20 to 24 are unemployed or not going to school, after serving as child soldiers who committed a litany of atrocities. Zoellick’s visit coincides with Sierra Leone President Ernest Bai Koroma telling some of his leading officials and ministers that they are corrupt, and warning them to shape up or face prosecution. Corruption is one of the reasons cited for the outbreak of civil war, which was largely fuelled by conflict diamonds.