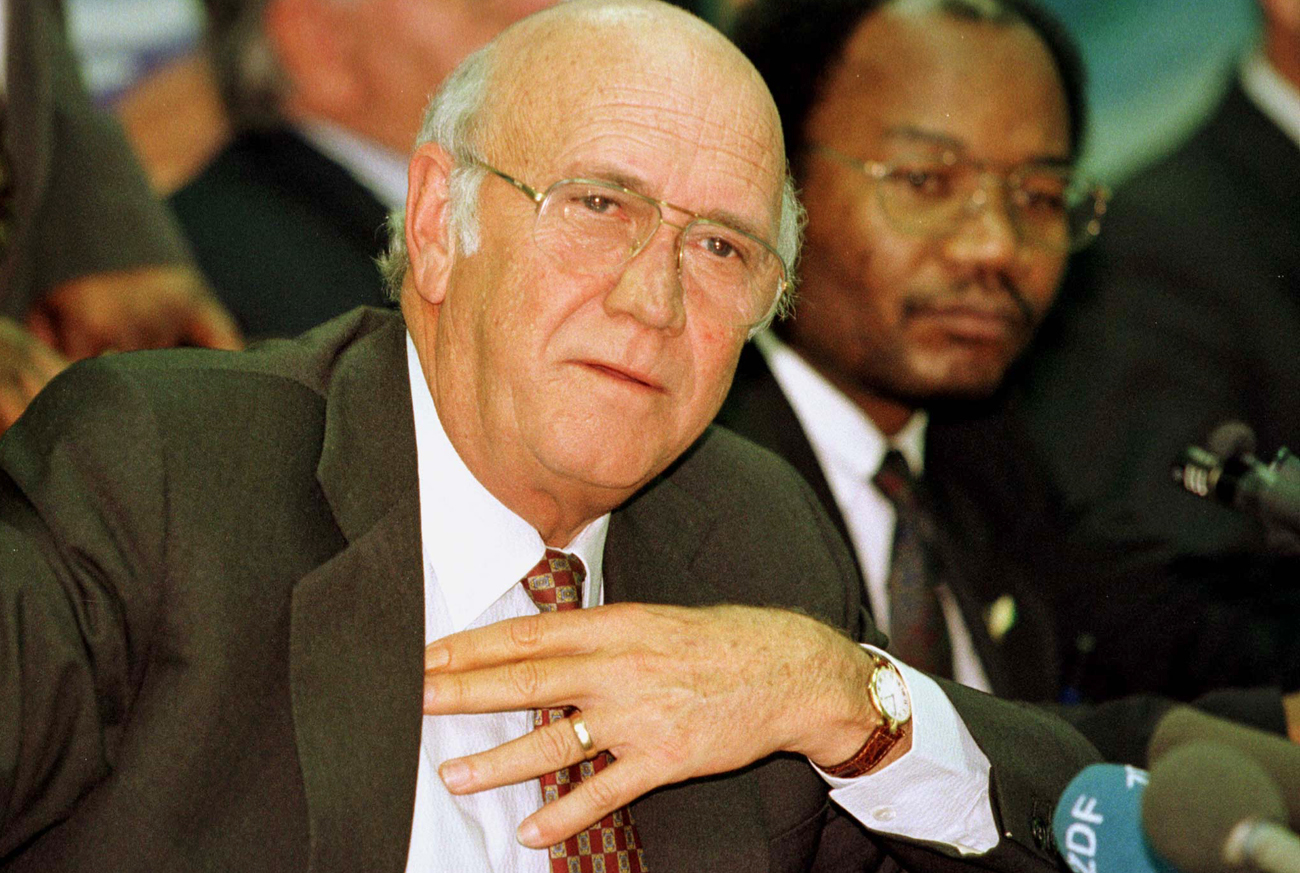 On 2nd February 1990, FW de Klerk stood up in Parliament and took what to everybody but him seemed to be a massive gamble; a gamble with the future of the country, his party and his own political life.

He announced, as is etched on the memories of everyone in the country, the unbanning of the African National Congress, the United Democratic Front, the SA Communist Party, the Pan Africanist Congress and the release of political prisoners, setting South African history irreversibly on a new and infinitely brighter course.

It’s slightly hard to believe that this cataclysmic event happened within our lifetimes. Everything after that point is history on the hoof. Everything before that was another country.

It’s also amazing that it took place so long ago. Matric students now cannot possibly remember the wild days of the 1980s, the darkness, the death, the regular ANC bombings, the ever-present sense of doom which pervaded our lives.

There were only two ways to deal with the present at the time; ignore it or be depressed by it. For those determined not to be subsumed by trivial pastimes or fastidiously focus on a narrow career path, the sense of an apocalyptic future oozed into every part of our lives.

De Klerk, in an instant, changed all that, turning certain cataclysm into a glorious unknown. It was an amazing time to be a South African journalist, never mind a citizen.

I was working for a Japanese television company at the time as a fixer, not entirely new to journalism, but early enough in my career to be bewildered by the news. My television team had gone to Cape Town to cover the speech, leaving me in Johannesburg to organise interviews with the normal talking heads of the time. “Can we talk to the ANC,” my producer asked me. “Oh no,” I said, “that would be impossible,” smiling inwardly at his naiveté.

I actually heard what the speech contained about an hour before it was delivered. The speech had been delivered in an embargoed form as usual to the Parliamentary press gallery just before De Klerk began speaking. But no embargo was keeping this out of the news and the phone lines were burning up within the press corps.

By the time De Klerk finished, groups had gathered in the streets around our central Johannesburg press centre and begun marching in great waves up and down Commissioner Street, toyi-toying madly, in the rare kind of political ecstasy that resembles a Pentecostal baptism. Makeshift ANC banners were being hoisted everywhere and ANC flags were hurriedly made out of scraps of black, red and gold material.

And so it began. What we did not know then was how long and how painful the transition would be. The escalating political violence, the stop-start negotiations, the return of the exiles, the interminable World Trade Centre talks, the breakdowns and, finally, the first democratic election. It all went by in a blur of exhausting news gathering as the politicians conducted their strange dances.

In retrospect, four years seems to have been an extraordinary amount of time, but it all happened in the instantaneous blinding glare of photographers’ flash guns.

Now here we stand, 20 years on, on a steadier road edging gradually further and further away from the abyss toward what? Normality? And in the meantime, what happened to all the people who drove the car at such an extraordinary speed along the edge of that precipice.

What happened to De Klerk? Is he chastened by his gamble? Does he think he made a mistake? Is he triumphant? Does he have regrets?

The answer to these questions is mesmerizingly boring. We know this because the Financial Times this weekend ran a long interview with De Klerk to mark the 20th anniversary of the 2nd of February speech.

Asked whether he had any last-minute doubts, De Klerk told Alec Russell, one of the steadiest and most judicious of the many foreign correspondents who plied their trade during the transition, simply “No. I wasn’t taking a chance. I believed I was doing the right thing. It was a rational decision. I thought it through properly … There was nothing opportunistic. It was no sudden impulse.”

I remember at one of the many press conferences during the transition, (just after he had called the whites-only referendum I think it was), someone asked De Klerk whether he was by nature a gambler. De Klerk was appalled by the notion, and spent 15 minutes haranguing those present about the dangers of doing such a thing.

And here he is, 20 years later, singing from the same hymn-book, determinedly ignoring the plainly obvious. The rest of the interview was much the same. There was no road-to-Damascus moment. He never thought apartheid was evil, he thought it was “unjust to the majority”.

“Bit late in the day,” Russell commented slightly sardonically perhaps. Oh no. The reappraisal of apartheid was a long process.

The crunch question of course was whether he would now be prepared to apologise for apartheid, but De Klerk now, as then, slides into what Russell describes as a “familiar legalist riposte”. The assassinations were unauthorised aberrations. The homelands were “morally defensible”, but the whole thing failed because races became intertwined in the economy. “We became an omelette and it’s impossible to unscramble an omelette.”

These same answers to these same questions I remember De Klerk delivering 20 years ago – nothing has changed. The sense of denial and blinkeredness remains palpable after all this time. Reflection has not improved his perspective.

As a young journalist, those deviations and distinctions used to infuriate me. “Why can’t he just state the damn obvious,” I often thought.

Yet a haunting thought only occurs to me now. What if De Klerk’s narrow legalism and seemingly messianic certainty were not part of the problem, but actually part of the reason for the solution?

The ANC’s politics, then and now, reminds you a bit of the line of a song which goes “one psychological drama after another”. Quite a contrast with De Klerk’s unwavering, if blinkered, focus.

De Klerk is often forgiven the “no apology” issue because, at a crucial moment, he did the right thing, even if it could mean his own demise as a politician, or as a living human. It was a brave, deft, remarkable act, almost unique in history. He claims he didn’t, but we all know he gambled ,and he won in a sense, and history mostly forgives those who win.

Yet it occurs to me now that perhaps it was the other side of De Klerk which helped secure the victory: not the gambler, but the steady, narrow focus. A sturdy ship in a sea of storms, just keeping on, keeping on, despite the insults hurled at him and the machinations of a more powerful and popular, but much less even, party.

Who’s to say which was more important in the end?