25 January: Hosts Angola crash out of Africa Cup of Nat...

25 January: Hosts Angola crash out of Africa Cup of Nations 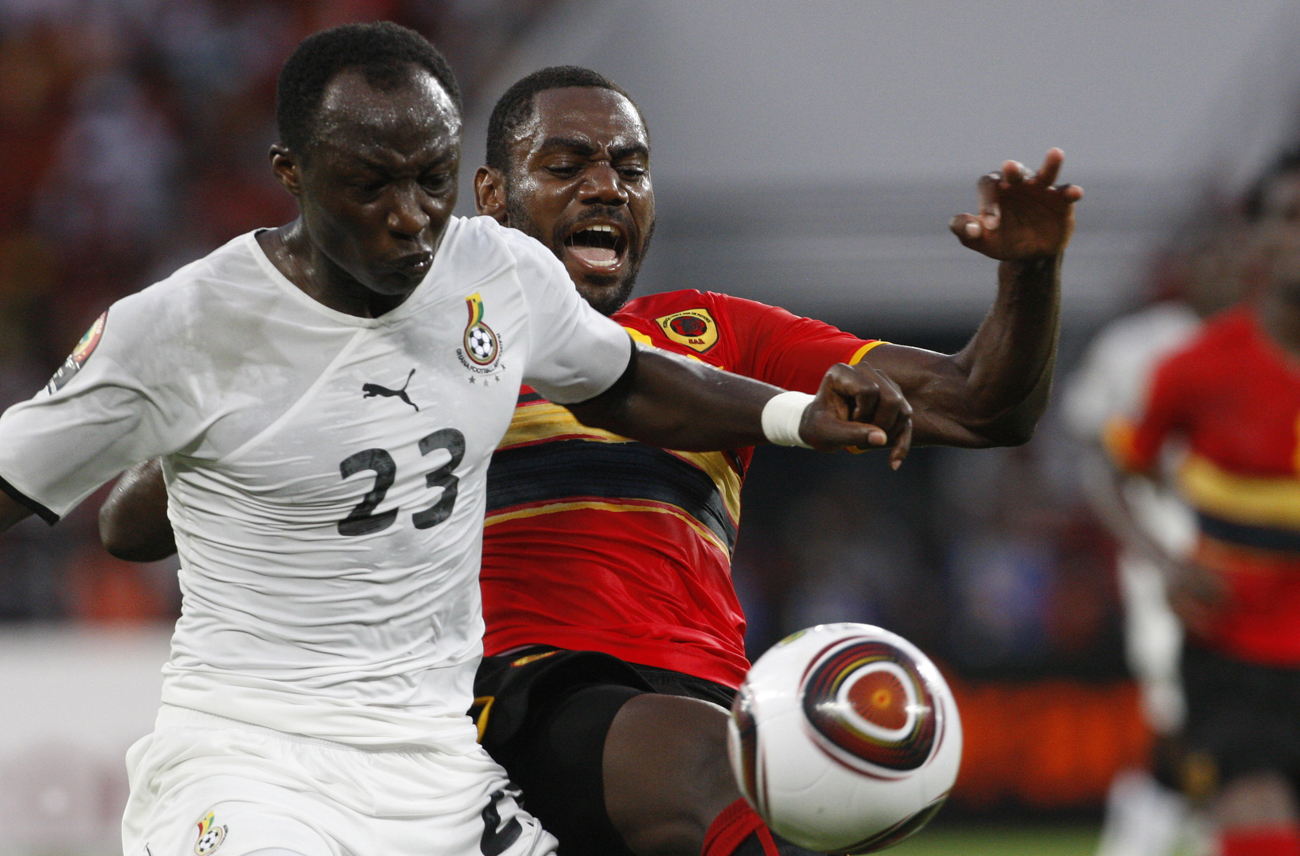 Hosts Angola crash out of Africa Cup of Nations

Angola’s dreams of a place in the semis at the Africa Cup of Nations came to nought as Ghana’s Black Stars edged them out in the first 16 minutes with a goal from the right-hand penalty area. The hosts missed several good opportunities, leaving Ghana to play Zambia or Nigeria in the last four.

In the second match of the day, Algeria beat Ivory Coast 3-2 in a thriller that went into extra time. Half-time saw the teams at one all, and two each at the final whistle. Pre-tournament favourites Ivory Coast looked to have it in the bag, when an 89th minute rocket put them 2-1 ahead. But Algerian substitute Madjid Bougherra hit a last-second header that saw them play extra time. The Elephants then panicked and an Algerian goal took them to the semi-finals.

Four African 2010 World Cup qualifiers are now in the running for the title – Cameroon, Ghana, Algeria and Nigeria – depending on who wins today’s matches between Egypt and Cameroon, and Zambia and Nigeria.

The semis start on Thursday, 28 January, with the finals taking place on Sunday, 31 January. Cameroon and Egypt are set to replay their 2008 Cup final, which the Pharaohs won 1-0. The Egyptians have now won a record 16 consecutive African Cup of Nations matches, and are on course for a record seventh title and record three trophies in a row.

Togo’s soccer team was attacked by separatists in Cabinda, Angola, before the Africa Cup of Nations, and financial markets often talk of Afro-pessimism, but despite all the negative publicity, African tourism is getting a boost from a US president with African roots and the 2010 World Cup being held in South Africa. So, take off your stab vests for a minute, blow your vuvuzelas, and be happy. No less an authority than the UN World Tourism Organisation says the continent saw international tourist arrivals increase 5% in 2009. Granted, the rise comes off only a 5% market share of about 900 million global tourists, but it happened during the “Great Recession” and it looks like we’ll get more of the same this year. The fact that President Barack Obama’s father was from Kenya has led to more Americans going on “safari”. That’s pretty strange in some ways, as Obama’s father wasn’t around much during his childhood (not much at all), but considering that most people can’t tell Timbuktu from Johannesburg, and divorce is now common, it’s less than surprising. And Africa gets to benefit. Meanwhile, the UK-based African Travel and Tourism Association claims the World Cup will have a huge effect on African tourism, and that locals are very proud that it’s in Africa. So, it doesn’t really matter, geographically-speaking, if tourists have no idea where they are, as long as they think it’s somewhere in Africa. But the travel agents and airlines and have a job to do making sure that people get to South Africa in June, and don’t end up on a beach in Ghana.

The extent of the violence of religious riots in the central Nigerian city of Jos is only now becoming apparent as bodies are being found stuffed in wells and sewage pits. Some 150 bodies were discovered in a village about 30km from the city, showing the degree to which the mayhem spread. Best estimates at present are that more than 350 people died when Muslim and Christian youths clashed last week, forcing thousands of residents to flee their homes. The city and an area to its south are now under military control, with reports saying many victims were burned, shot or hacked to death. Jos, which is divided into Christian and Muslim areas, also saw deadly religious riots in 2001 and 2008, which led to the deaths of some 1,200 people in total. Nigeria’s Muslim President Umaru Yar’Adua has been in Saudi Arabia for two months receiving treatment for heart problems, and while he’s been away, political tensions have started to simmer in the vastly populated West African state.

A federal court has told Nigeria’s cabinet to decide within 14 days if ill and absent President Umaru Yar’Adua is fit to lead the country. Earlier, a court gave power to his deputy, vice president Goodluck Jonathan, but questions remain over whether this constitutes a full transfer of executive control. Now the federal court wants cabinet, on the advice of doctors, to decide if Yar’Adua is capable of discharging the functions of his office. If not, then Jonathan must take over. The court was responding to a suit brought by opposition activist Farouk Adamu Aliyu. Former senior politicians have also called for the president to step down, and thousands of people have marched in Lagos and the capital, Abuja, protesting against his absence.

April election in Sudan looking more distant by the day

Sudan’s hopes of holding its first democratic election in 24 years are under threat from political harassment of opponents in both Sudan’s north and semi-autonomous south, according to New York-based Human Rights Watch. But there’re many fires to put out before the mainly Arab north and black African south, which fought a 22-year civil war that ended in a 2005 peace agreement, can share power and wealth under a new democratic dispensation. The country’s western province of Darfur is under emergency rule after a seven-year separatist battle saw hundreds of thousands of people killed and millions displaced. This has led the International Criminal Court in The Hague to issue an arrest warrant for the nation’s President Omar Hassan al-Bashir. So April’s election, which would also set the stage for a southern Sudanese referendum on independence in 2011, might be the straw that breaks the camel’s back and sends all sides back to the trenches. The south has much more oil and fewer people, and it’s far from clear how this wealth will be shared. Bashir’s dominant National Congress Party has just passed a law giving Sudan’s reviled intelligence services wider powers, so there’s not much doubt the ruling party is trying to stymie a free, fair and transparent poll. And now, the former rebel southern Sudan People’s Liberation Movement says it will boycott elections in a key oil-producing state over concerns about widespread fraud during electoral registration. It doesn’t look good, and will likely get worse in the months to come.

Kenya’s efforts to deport Jamaican-born race-hate cleric, Abdulah Ibrahim el-Faisal, have led al-Shabaab, a radical Somali Islamist group that the US says is linked to al-Qaeda, to threaten to attack the country. After failing in an earlier attempt to send the preacher back home via Nigeria and The Gambia (a small and nasty West African state), authorities said they put him on a charter flight back to Jamaica last week, but not everybody’s sure that he’s gone. His jailing and double deportation fomented deadly riots Nairobi in which some 300 Somali immigrants and refugees were detained, including Somali government officials who live in Kenya to escape the attentions of al-Shabaab. Now an al-Shabaab website has men chanting in Swahili, saying that when they reach Nairobi they will kill all infidels. Observers say Kenya is vulnerable to attack by the group, which controls large swathes of neighbouring south and central Somalia. Muslim human-rights groups in Kenya support the Jamaican cleric, at a time when Kenya has a rocky power-sharing government that was formed after 2007 elections which saw widespread killings and mayhem.