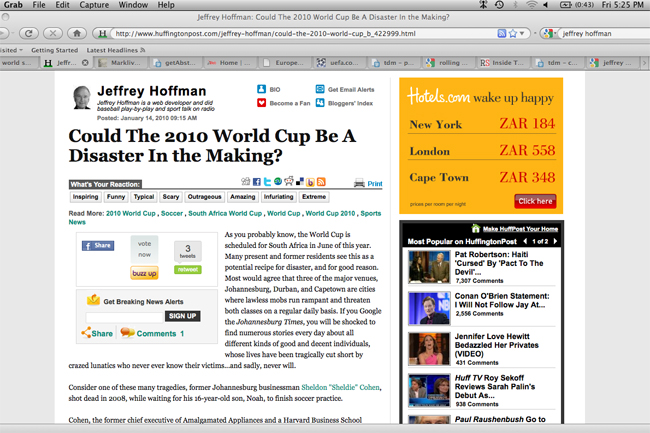 Bits of the blogosphere are beginning to react with trepidation to the prospect of crime during the World Cup this year.

No connection is being drawn with the African Cup of Nations, but simply with crime in general.

In a column on the influential Huffington Post website, columnist Jeffrey Hoffman goes much further than most, bemoaning the event taking place in cities where “lawless mobs run rampant”.

“Many present and former residents see this (the holding of the world cup in SA) as a potential recipe for disaster, and for good reason,” he writes.

“If you Google the Johannesburg Times, you will be shocked to find numerous stories every day about all different kinds of good and decent individuals, whose lives have been tragically cut short by crazed lunatics who never ever know their victims…and sadly, never will,” Hoffman writes.

He relates an emotional story of businessman Sheldon “Sheldie” Cohen,  who was shot dead in 2008, while waiting for his 16-year-old son, Noah, to finish soccer practice.

Cohen, the former chief executive of Amalgamated Appliances and a Harvard Business School graduate, was murdered around 8pm outside the Balfour Alexandra Football Club, in Highlands North.

He was talking to his father, Jack, on his cellphone when fatally shot in the neck.

“If this anecdote is hard to stomach, imagine the number of potentially explosive situations just waiting to materialize when money-spending foreigners from all corners of the earth convene in South Africa this summer. While this is but one isolated incident, the probability that naive foreigners will put themselves in harm’s way is fairly high.”

“Clearly, soccer…or football (as it is known outside of the U.S.) fans worldwide need to know the risks that they run in trying to have a safe trip to the Cup matches. Does this really sound like a place to stage the most watched sporting event in the world? It wasn’t even a safe place for Sheldie Cohen to watch his son’s soccer practice.”