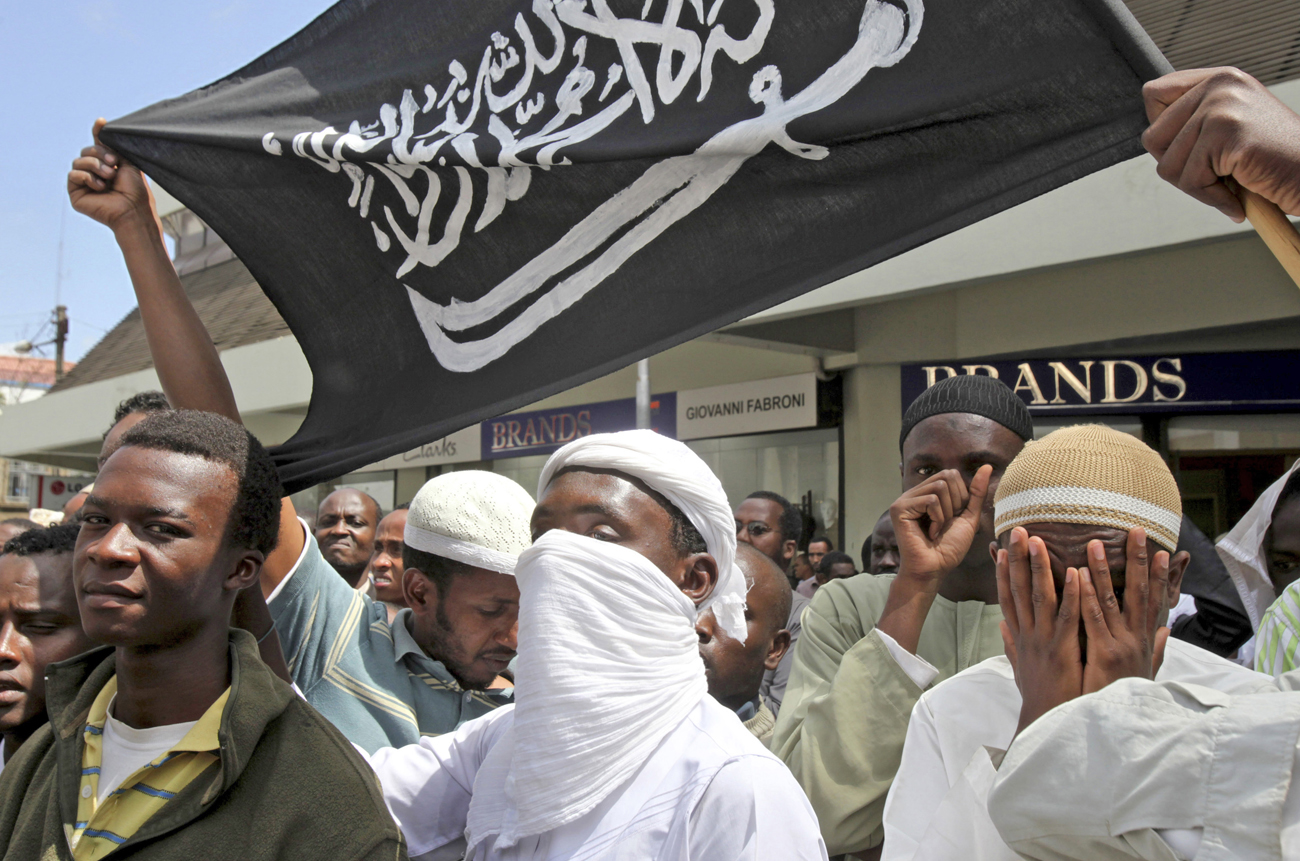 Nigeria has sent a Jamaican-born Muslim cleric expelled from Kenya for preaching racial hatred back to Nairobi. The cleric was supposed to land up in The Gambia, before making his way back to Jamaica, but reports say that airlines refused to take Abdullah al-Faisal from Nigeria to the tiny West Africa state, and that his Nigerian transit visa then expired. Earlier attempts to send him to Tanzania failed, no doubt for the same reasons that Kenya deported him. The man had already served time in a British prison for calling for the murder of Hindus and Jews. His lawyer says he doesn’t understand why al-Faisal is back in a Kenyan jail, because he’s never been charged in a court. Maybe he should ask the Jamaicans, who don’t want him either.

(Photo: Muslims participate in a demonstration against the deportation of controversial Jamaican preacher Sheikh Abdullah al-Faisal, outside the Jamia Mosque in Kenya’s capital Nairobi January 8, 2010. Kenyan immigration authorities deported the Jamaican Muslim cleric to Gambia on Thursday because they believed he had links to terrorism, the government said. The banner reads, “There is no other God but Allah and Muhammad is his Prophet”. REUTERS/Noor Khamis)

Only two games have been played in the African Cup of Nations so far, but already the drama is more intense than one could imagine. After the tournament opened on Sunday to chants of “Viva Angola” in the country’s 50,000-seater November 11 stadium in Luanda, Togo went home to mourn its dead after separatists in Cabinda fired on their bus, killing two Togolese soccer officials and wounding their reserve goalkeeper.

Togo then asked to be able to honour their fellows by playing in the tournament, but the ruling Confederation of African Football said if Togo didn’t turn up for their first match against Ghana in Cabinda, they would forfeit their place. Now they’re out of the running and the games go on.

The night the Togolese went home, Mali did the impossible by coming back from being 4-0 down against hosts Angola in the 79th minute, to snatch a sensational 4-4 draw.

On Monday, minnows Malawi shocked 2010 World Cup qualifiers Algeria 3-0, after the Algerians had initially put pressure on a nervous Malawian defence. The North African team was a shadow of the side that beat Egypt in the play-offs to make it to the South African spectacle later this year. But now they need to refocus their energies on their match against Mali, who drew 4-4 with hosts Angola.

Angola has arrested two individuals suspected of being involved in the deadly attack on the Togo soccer team’s bus at the Africa Cup of Nations. The country’s national radio station says they were arrested in Cabinda where the attack took place. Cabinda is an oil-rich region separated from the rest of the nation by a strip of land giving the Democratic Republic of Congo access to the Atlantic Ocean. The region has had a low-level insurgency for many years, despite the separatist Front for the Liberation of the Enclave of Cabinda signing a 2006 ceasefire with the central government in Luanda. Initial reports said two Togolese soccer officials and their Angolan bus driver were killed, but the driver survived and the team has returned home. A faction of Flec whose leadership is based in France claimed responsibility for the automatic weapons attack, with Angola calling for the French to arrest those responsible. The faction says it will continue its insurgency, and that the attack had been directed at Angolan security forces leading the Togo team convoy. The neighbouring DRC and Republic of Congo are also being asked to help, with the DRC saying Flec is now deemed a terrorist group, and would be stripped of its refugee status. Togo wants to honour its dead by playing in the tournament, saying it hopes its schedule can be changed. But the ruling Confederation of African Football says if Togo doesn’t turn up for its first match in Cabinda, it will forfeit its place. It’s a harsh world.

Ugandan gays watch as minister comes out of the homophobe closet

Thank the Lord for small mercies. A Ugandan government minister, swimming against a tide of homophobia, now says a proposed law which includes the death penalty for various homosexual acts isn’t necessary. Homosexuality is punishable by up to 14 years in jail in Uganda, but MP David Bahati’s proposed law would introduce the death penalty for acts involving minors, serial offenders and if the perpetrator is HIV-positive. Aston Kajara, minister of state for investments, says the government might pressure Bahati to withdraw his bill, which sparked international outrage and threats to cut aid. Kajara’s comments are thought to be the first public sign that some in government won’t support the bill. President Yoweri Museveni, who’s no friend of gays himself, might have to decide that his drive for a free-market economy is worth more to him than alienating the West.

Al-Qaeda may take Timbuktu off the cultural map

Al-Qaeda is doing a good job of painting Africa in a bad light. Just weeks after Nigerian would-be plane bomber, Umar Farouk Abdulmutallab, tried to take down a Detroit-bound jet, Mali has changed the venue for a Tuareg nomad cultural festival that attracts many world-class acts. The event will now be held on the outskirts of Timbuktu rather than in the desert north of the city, after Western tourists were kidnapped for ransom in Mali in recent months. Some Western governments, including France, have told their citizens to stay away from the area, which hides militants from what’s known as al-Qaeda’s North African Wing. The group also goes by the name al-Qaeda in the Islamic Maghreb. The Malians are angry that they’ll lose tourism dollars, but the militants (if you can call them that) now say they’ll execute a French hostage if four al-Qaeda prisoners held in Mali aren’t released within 20 days. Last May, the terrorists killed British hostage Edwin Dyer, who was kidnapped in early 2009. Until the Malians do something about this, they can expect many music lovers to be scared off.

It’s official. Hutu extremists shot down a plane carrying former Rwandan president Juvenal Habyarimana, whose assassination ignited the country’s 1994 genocide. That’s according to Tutsi President Paul Kagame, whose Rwandan Patriotic Front party was itself accused by a French judge of shooting down the aircraft. Sixteen years later, Kagame says a government investigation shows that members of Habyarimana’s inner circle planned his murder to kill off a power-sharing deal with the then-rebel Kagame. This was subsequently used as a pretext for killing some 800,000 Tutsis and moderate Hutus. Habyarimana was returning from peace talks in Tanzania, and was to swear in a transitional government and begin integration of Kagame’s forces into the national army, the government said in its report. It gets murkier, though, as Rwanda then cut relations with France, saying the French government funded and trained those responsible for the mass murders. France denies this, and after a long impasse, the two countries restored ties late last year. It’s a pity that all the double-speak hasn’t provided enough justice for the dead. Many suspected perpetrators are still at large, and likely will never face charges.
Read more: Reuters, Global Research

Malawi’s first gay couple to marry in public have had their lawyers file court papers requesting a review of country’s law banning homosexuality. Being gay in Malawi carries a prison sentence of up to 14 years. The brave “bride” and “groom”, Steven Monjeza and Tiwonge Chimbalanga, married in a symbolic traditional ceremony on Boxing Day, but were quickly arrested and charged with gross public indecency. Their defence team argues their arrests amount to discrimination, and are a violation of their rights to freedom of expression and conscience as enshrined in the constitution. The presiding magistrate agrees there should be a constitutional review, but ruled the case only could be moved to the constitutional court if the chief justice concurs.