Firearm amnesty opens; criminals queue around the block. Not. 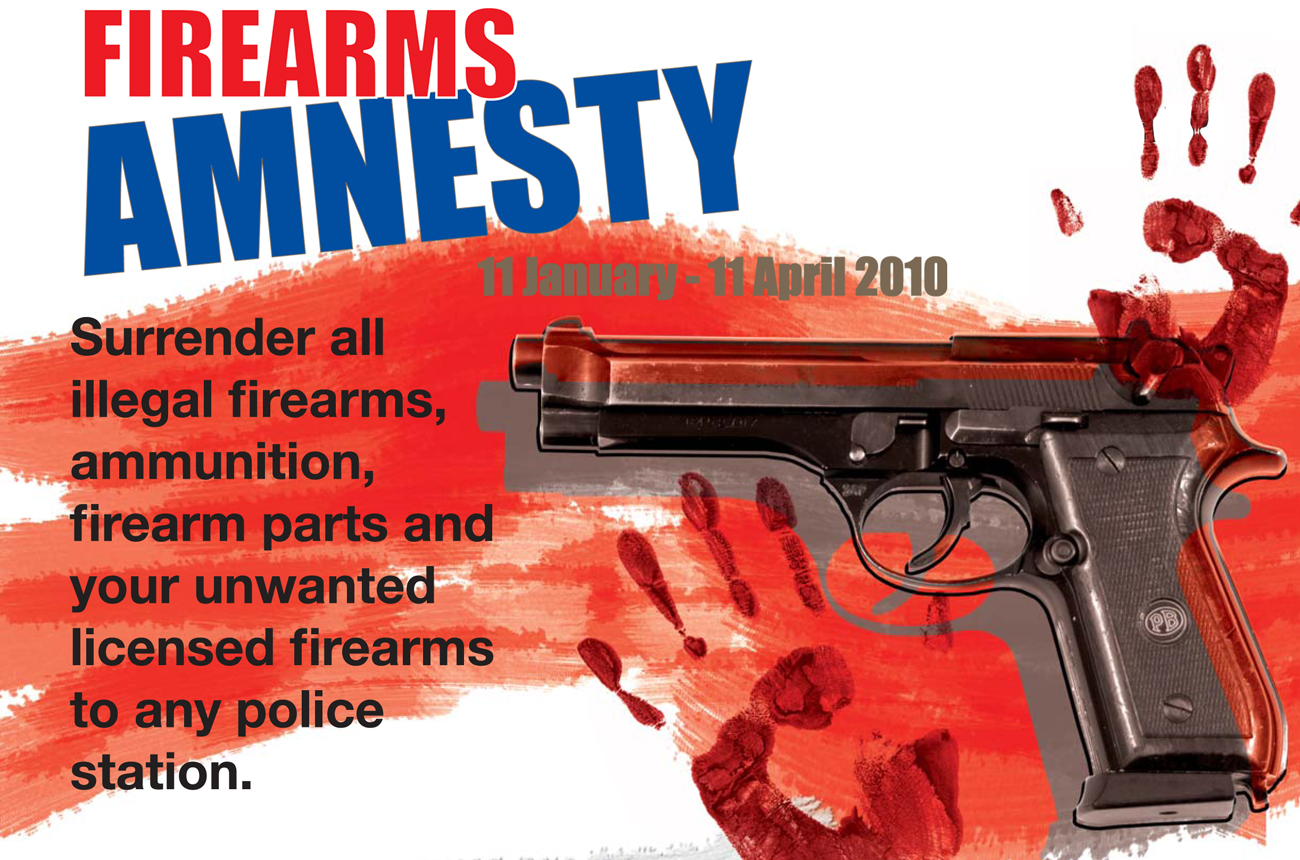 For the next three months anybody can pitch up at a police station and hand over a firearm without being prosecuted for illegal gun possession. As long as it hasn’t been used to do anything illegal, that is, in which case you’ll burn.

If you happen to have a couple of spare automatic rifles cluttering up the house, you can, until early April, take them to the police, fill in a form, produce your ID book and be rid of them for good. Eventually they’ll be put on a big pile with a lot of other weapons and crushed, so making the world a safer place.

If you are unsure of the provenance of that AK-47 you keep under the bed, however, you’ll probably think twice about using this opportunity. In theory every gun handed in will be ballistically tested and matched to crime data; the police say they have the capacity and are committed to testing every weapon. If there is a match, the individual who handed in the weapon “will be questioned by the police to determine the facts”, says police minister Nathi Mthethwa. “If it’s indeed found that the person is in fact the perpetrator, the person will be arrested and taken to court.”

That, despite all appearances, is the carrot. The stick is that anyone who fails to hand in firearms will be arrested when caught and will have to face charges of illegal possession on top of, say, aggravated robbery. So if you are a criminal your choice is near-certain arrest and prosecution for past misdeeds if you hand over the primary tool with which you earn a living, or the vague possibility of later arrest, with a couple of months jail time added to your total. It doesn’t take a genius to work out the odds on that one; we’re betting that more illegal weapons are likely to end up at the bottom of convenient dams than in police hands should a bunch of criminals suddenly decide to get desk jobs instead.

Mthethwa says an anonymous amnesty would allow criminals to commit a crime, walk into the nearest police station and get rid of a crucial piece of incriminating evidence in absolute safety. That certainly wouldn’t go down well with the public.

On the other hand, the lack of anonymity will reduce the number of weapons handed in and also ensure that most of those are either legal but unwanted (in which case the amnesty doesn’t apply at all) or previously licensed but with the paperwork not kept up to date. Which is entirely fine with the government.

It’s closer to a religious belief than anything backed up by statistics, but Mthethwa and co say that fewer guns will mean fewer crimes. One source of guns used in crime is weapons stolen from licensed owners, so removing those from circulation will reduce crime. As feared by the they’ll-take-our-guns-from-our-cold-dead-hands crowd, this is indeed the thin end of the wedge. Eventually the executive would like to see all private firearms removed from circulation. “In the future we want to see only law enforcers carrying guns, not everyone, but everything is taken a step at a time,” Mthethwa says.

The strictly voluntary and strings-attached nature of the amnesty is one problem. Another is what happens to the guns after they disappear behind the counter. Some entities, Mthethwa says, stopping just short of calling them counter-revolutionary, will try to derail the process by “the discrediting of the safety of firearms in police custody”. Which isn’t a particularly great leap, given that we know of cases where surrendered guns have turned up on the black market, and in some cases have been subsequently identified as having been used to commit crime.

In order to prevent that kind of thing from happening, the police has promised tight monitoring and controls. How successful that will be we’ll never know entirely; weapons that go missing are likely to never be recorded in the system, making for poor statistics on such occurrences. But we should have numbers on how many weapons are handed over, and how many of those were actually illegal and previously used in crimes, some time towards the middle of the year.