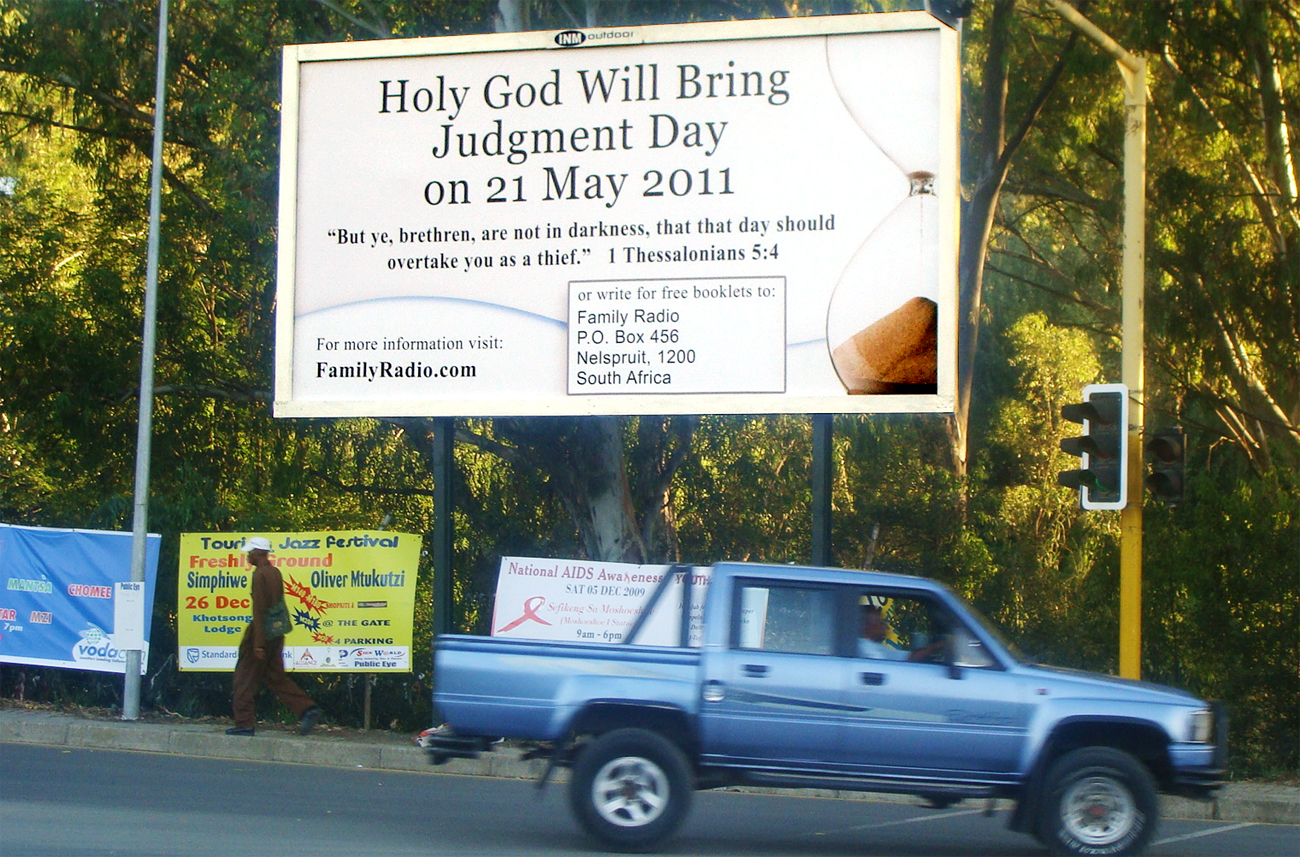 It’s a phenomenon that appears way larger than we suspected when we first wrote about it last week. Growing communities from California to South Africa, from China to Ghana, believe the world will end on May 21st 2011.

The question is intriguing: how many people worldwide believe that May 21st 2011 is the end of the world? There’s no real way to tell, because there’s no such thing as an official church that accepts applications for membership. If you’re a follower of Harold Camping, the bible scholar and media owner who’s worked out – through numerology – the exact date for the End of Days, what you mainly do is listen to his radio station. And because Family Radio is a nonprofit donation-funded entity that takes no advertising and broadcasts in 48 languages to every continent on earth, it’s practically impossible to determine the size of its listenership. All we can say about the number of believers, then, is that there’s obviously a lot.

The number is also likely to grow the closer the calendar moves to May 21st next year. At the moment, according to the organisation’s website, Family Radio is searching for people who can help them expand their range of broadcast languages. Included in the proposed new mix are Arabic, Armenian, Creole and Khmer. By far the largest component on the list, though, is African languages – and especially South African languages. If Family Radio is successful, listeners will soon be able to hear about the imminent Second Coming of Christ in Sindebele, Northern Sotho, Sesotho, Shona, SiSwati, Tswana, Xhosa and Zulu.

Johan Coetzee, a South African believer based in Nelspruit, started listening to the English broadcasts of Family Radio on shortwave about six years ago. “At first I thought it was a false prophecy,” he says, “but checking it myself, I started to realise there’s a lot of information in the bible referring to time and judgment.” Nowadays, according to Coetzee, May 21st 2011 is “absolutely” the end of the world.

“On that day judgment is going to start physically,” he adds. “Judgment in a spiritual sense started on May 21st 1988.” Asked for clarification on the last point, Coetzee says the 1988 date was when God “spewed out” the institutional church – as opposed to the eternal church – and “opened up the seals of the bible”. While Coetzee is reluctant to guess how many believers there may be in the country, he says he knows “a number” of people in Nelspruit and Cape Town who follow the teachings of Camping. He’s also met a community of believers in Lesotho, and mentions that a billboard announcing the Second Coming has recently been erected at one of Maseru’s busiest intersections.

A photo of the Maseru billboard has indeed been posted to the website of the Electronic Bible Fellowship, one of several central resources for Camping’s global ministry, alongside similar photos of billboards at major traffic intersections in Addis Ababa and Dar es Salaam.

Like Family Radio, the abovementioned website offers services in Afrikaans, Mandarin, Japanese, Polish, Russian, Romanian and Turkish, amongst a host of other languages. The site also contains information about a recent “Caribbean tract trip” where thousands of pamphlets and T-shirts were distributed in Mexico, Belize and Guatamala, audio files of the 2009 Ebible Fellowship Conference, and photos of the Ghana fellowship proudly wearing their “May 21, 2011, The Rapture” T-shirts.

All photos courtesy of The Electronic Bible Fellowship