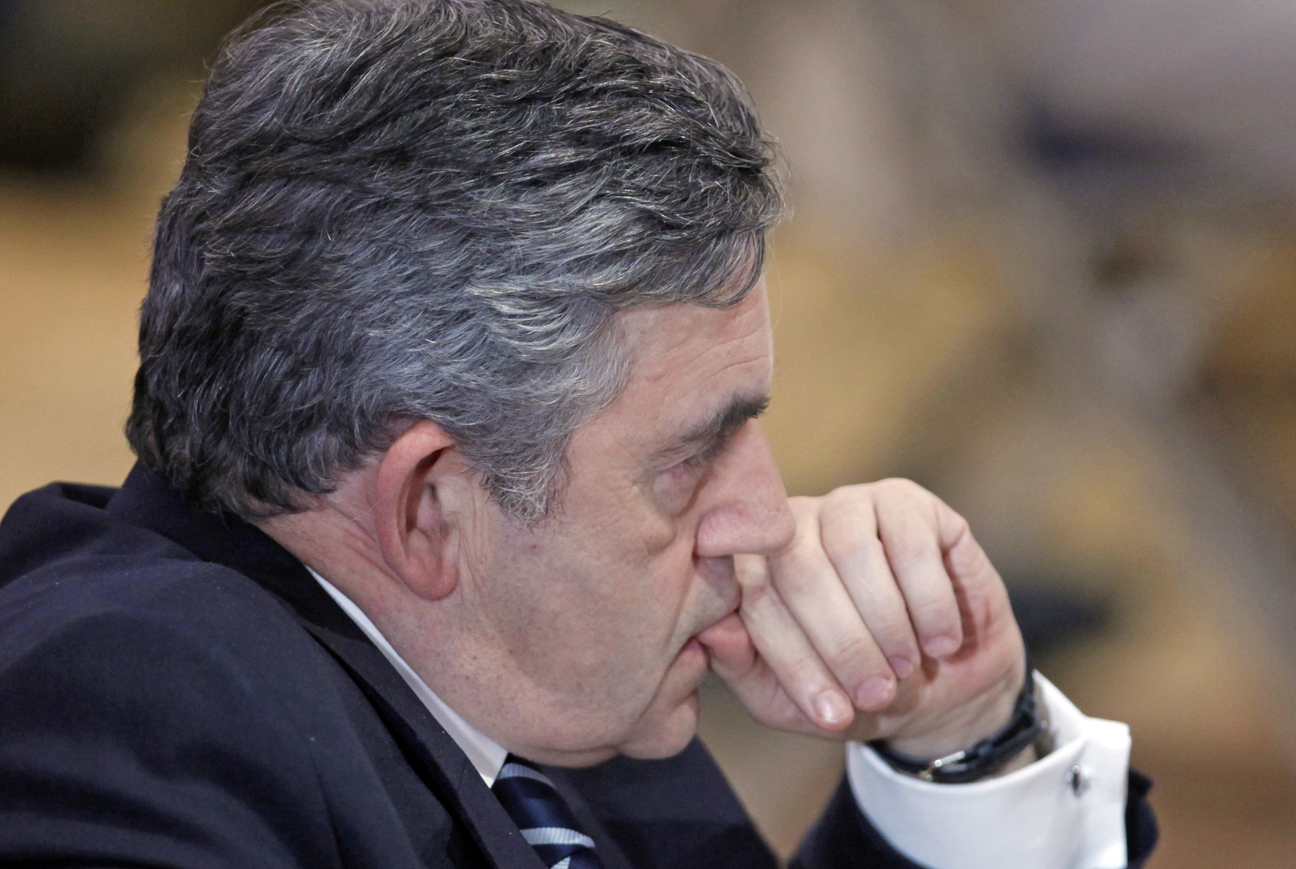 Labour Party faithful gang up on Gordon Brown; Yemenis tell US they can deal with Al Qaeda on their own; US security agencies battered on all sides.

As a measure of British Prime Minister Gordon Brown’s unpopularity, and a general decline in the fortunes of Tony Blair’s former political home, ex-Labour Party cabinet ministers Patricia Hewitt and Geoff Hoon have appealed for the governing party to hold a secret ballot on Brown’s leadership. This comes ahead of a general election plagued by Britain’s faltering economy, and criticism of Brown’s handling of the war in Afghanistan. The dissident voices say the party is deeply divided over Brown’s policies, and that the issue should be finally resolved. (Photo: Reuters)

Yemen says it doesn’t want any direct intervention by the US or other foreign powers in its battle with Al Qaeda. The country’s Foreign Minister, Abu Bakr al-Qirbi, told The Associated Press that foreign troops on Yemeni territory would further inflame the situation, after the US clamped down on security after 23-year-old Nigerian, Umar Farouk Abdulmutallab, tried to bomb a flight to Detroit on Christmas Day. The US claims that Al Qaeda in Yemen equipped the radical youngster, which later forced the closure of the US and British embassies in the Yemeni capital Sanaa. Another front seems to be opening in the “war on terror”.

With US 2010 Congressional and Senate elections scarcely under way, a Democratic governor and two senators have decided not to run for re-election in a taxing political environment for President Barack Obama’s party. Ongoing anger at the massive bailouts by taxpayers’ of America’s largest corporations, and the renewed rush to give huge bonuses on Wall Street, have made the resignations of Senators Chris Dodd of Connecticut and Byron Dorgan of North Dakota, and Colorado Governor Bill Ritter, a big talking point. The Democrats saw a slew of retirements among House members in late 2009, and one congressman defected to the Republicans. This gives the GOP one more reason to make political hay, and provides possible opportunities for them to pick up seats in the 60-40 Democrat Senate majority.

Egypt adds to Gaza woes in clashes with Palestinians

The aftermath of Israel’s January 2009 invasion of the Gaza strip has seen Egyptian security forces focus on building an underground wall along its border with Gaza to block tunnels used to smuggle contraband and weapons. This has increased tensions between Egypt and its Palestinian neighbours. Now the two sides have clashed at the Gaza-Egyptian border over delays to an international aid convoy, which saw one Egyptian border guard killed and 15 Palestinians wounded. Hamas, which rules in Gaza, sees Egypt’s attempts to seal the border as a threat to its survival, and the latest violence is the worst since an Egyptian major was killed by Palestinian gunmen during the 2009 Israeli offensive. With the building of the underground wall, Gaza is now hemmed in on all sides, as Israel blockades its sea, land and airspace. This makes one wonder what cards Hamas has left to play. No doubt it will resort to violence.

US security agencies battered on all sides

US President Barack Obama has criticised lapses among US security services, who seem increasingly unable to deal with rogue bombers, whether flying in planes above Detroit, or on the ground in Afghanistan. But the agencies face problems that are akin to looking for needles in global haystacks, and this asks hard questions of Western foreign and security policies. Last week, a Jordanian militant, considered by US spy agencies as a promising double-agent who could lead them to Al Qaeda’s top leaders, detonated a suicide bomb at a US base in Khost province, killing seven CIA operatives. The problem of random global terror is mirrored in bombings in past years from London to Madrid, and so far Obama has responded by committing 30,000 more troops to Afghanistan. Former Soviet military officers say Afghanistan seems destined to become America’s new Vietnam, but unless the Russians and Chinese stop talking and climb aboard the anti-terror bus in the near future, terrorism will engulf the world.

Conservative Americans will say “I told you so”, after 20% of terrorism suspects released from Guantanamo Bay returned to the fight, according to a classified Pentagon report (that’s obviously not classified any longer). Guantanamo Bay is controversial for all sorts of reasons, not least because it’s on the Cuban mainland (a hangover from the good old days in Havana), and is famous for torture methods that include “waterboarding” and grunge music played at decibels that only alco-popped teenagers would want to listen to. The news is likely to up the tempo of the already angry debate over US President Barack Obama’s plan to close the infamous military prison. There’s a flip side to one in five Al Qaeda suspects returning to the field of battle. Four out of five apparently don’t. At 80%, that’s a far better pass rate than South Africa’s matriculants, so the Pentagon’s finding of an upward trend on the recidivism rate sounds a bit like sour grapes, especially as not everybody at Guantanamo has remotely been proven guilty. However, last year the Pentagon reported that the rate of released detainees returning to militancy was 11%, and with questions being asked about US gains in Afghanistan, that’s more than half a militant more re-entering the fray against Obama’s 30,000 new troops. Now if only the Pentagon would give out the full number of detainees, one could work out the real threat that this poses.

Hello, cellphone radiation may be the answer to Alzheimers

Mobile phones have long been believed to cause various brain cancers, but while the verdict is still out on that one, scientists now say they have found a potential benefit from radiation in work carried out on mice that suggests cellphones might protect people against Alzheimer’s disease. Researchers in Florida say the radiation emitted by a girl’s new best friend (diamonds aren’t really forever, you know) actually protects the memories of mice programmed to get Alzheimers. But if scientists can actually programme mice to get Alzheimers in the first place, how come they don’t just de-programme them? That way, science wouldn’t have to attack Alzheimers with a device that many still suspect causes deadly tumours.

Egyptian radicals such as the Islamic Group, colloquially known as the Al-Gama’a al-Islamiyya, filled the void after the leadership of the Muslim Brotherhood renounced violence in the 1970s. Since then, they have committed some pretty spectacular acts against locals and foreigners, often (and perversely) yelling “God is great!”. In the latest atrocity, three men sprayed automatic gunfire into a crowd of churchgoers in southern Egypt during a service for the Coptic Christmas, killing at least seven people. The Egyptian Interior Ministry says the attack was likely in retaliation for the November rape of a Muslim girl by a Christian man in the town of Nag Hamadi, about 65 kilometres from the famous ruins of Luxor. Since 1992, nearly 1,000 people have been killed in such violence, mostly Egyptian Christians. A government campaign to overcome terrorism has put an estimated 26,000 militants in jail, with some facing the death sentence. In 1997, the Islamic Group was responsible for machine-gunning and hacking to death with knives 58 foreign tourists and four Egyptians at the Temple of Hatshepsut in Luxor. The latest bout of murders ups the ante on Islamic radicalism everywhere, in a world that fears the growing clout of Al Qaeda.