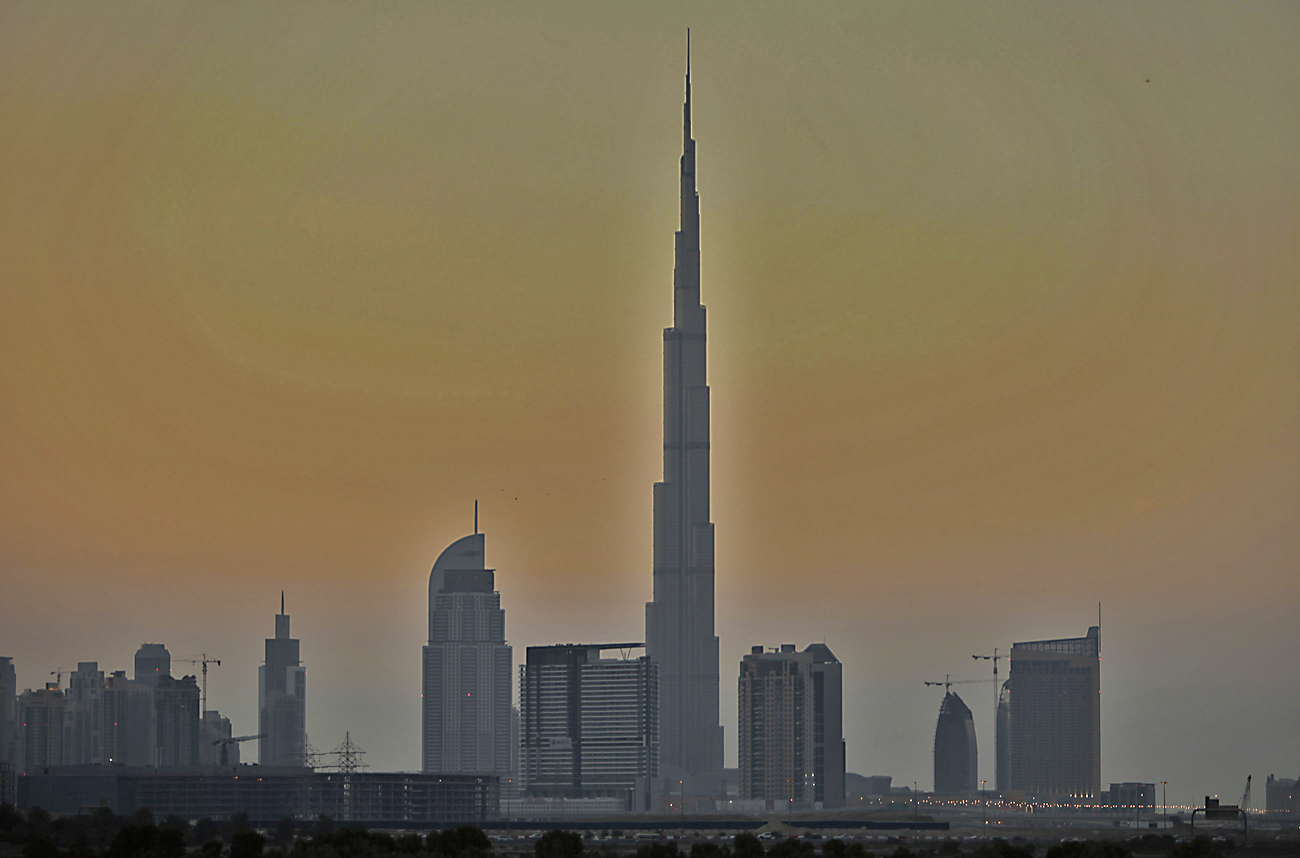 Thank goodness the Dubai area is geologically stable, because its regional politics and economics certainly aren't.

Pretty soon some 12,000 people will be living and working in the Burj Dubai, a soaring 818m needle of glass, concrete and steel that overshadows the diminished real estate on the desert floor that is Dubai.

At least that’s what the owners of the world’s tallest building hope as they officially open the centrepiece of the 202ha development this week. The project is one of superlatives. Not least that it will house the world’s highest mosque nearly 160 storeys above ground. It cost $1.5 billion to build, according to Dubai’s state-owned developer, Emaar. It’s a building without peer, although a number of other super-structures are being constructed elsewhere on the globe and in nearby Kuwait, Qatar and Saudi Arabia. It’s also a testament to the day the world stopped viewing Dubai as the Neverland of economic prosperity, effectively deserting the Las Vegas of the Arabian desert.

The Burj Dubai is not quite finished yet with apartments and offices still two months shy of completion, but, by holding the lavish opening ceremony this week, the building’s owners are no doubt hoping the economically challenged emirate’s good fortunes will return in the new year. They invited 6,000 guests to inaugurate the megabuilding, which is so tall that the twin towers of the fallen World Trade Centre, set on top of each other and including their antennae, would only slightly overreach it. The blurb says the temperature at its base is 10°C warmer than at its zenith.

But the temperature has also been fluctuating among the building’s investors, and its 1,044 private residential units already face losses after property prices plummeted in Dubai.

Neighbouring emirate, Abu Dhabi, has given Dubai a $24 billion bailout in the past year, after Dubai World, the state developer of much of Dubai’s infrastructure and real estate, put a hold on paying back tranches on some $60 billion of debt. The markets have taken fright, and so the Burj Dubai opening will be more muted than many would have hoped, despite a guest list that must read like the who’s-who of global wealth and celebrity.

The UK Guardian newspaper says the fountain outside the megalith alone cost a reported $214 million, and the 160-room hotel was designed by fashionista, Giorgio Armani. It seems the building also has enough glass to cover 17 soccer pitches and harbours sufficient concrete to build a pavement from Britain to Italy. But the wealth and glamour don’t extend to the people who really built the Burj Dubai – whose sweat and blood was shed in the searing desert heat. Indeed, many of those who built Dubai itself from the ground up are labourers from Pakistan, India and Bangladesh who earn between $4.50 and $7a day.

The Burj Dubai is no doubt a wonder of the world. It dwarfs its nearest finished rival, the Taipei 101 building in Taiwan, by several hundred metres. Its owners say it represents the will and ingenuity that have made Dubai a true world city, and that it’s a symbol of the entire Arab world. But it looks like a long road back for the emirate’s once-booming property market. And the assembled guests must have been hoping they weren’t standing in the world’s largest folly to date.