The Decoder: The wages of LA Law

The Decoder: The wages of LA Law 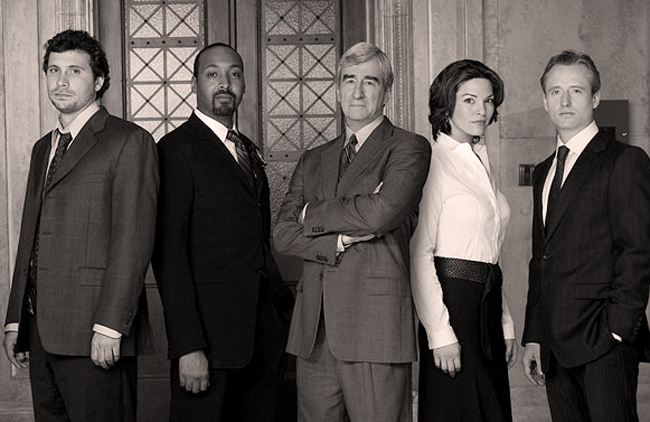 If you just want underlings to do their jobs then fine, use everyday language. But if you want to instil in them a sense of panic – and possibly guilt for the destruction of the universe – look no further than the lexicon of legal dramas.

It’s not like the whole thing started with Arnie Becker, Michael Kuzak, Victor Sifuentes and the firm of McKenzie, Brackman, Cheney & Kuzak, but they certainly helped step things up a notch. This was 1986, slap bang in the middle of the Gimme Decade, and Steven Bocho’s LA Law exploited an obsession long lurking in TV audiences the world over: the mechanics of law firms, and the sex lives of the lawyers inside them.

Twenty years later, after suffering through Law & Order, The Practice, Ally McBeal, Boston Legal and numerous other law-themed TV shows, the televised faux-universe of lawyers is a grinding cliché, a fact that does nothing to dim our obsession. In trying to propose a reason for this, the cultural theorist comes to realise that not every popular mania has an explanation: Sometimes, there is a glitch in the social machine.

This is no place to discuss the pros and, um, cons of the legal profession, but rather to point out how important a place it holds in our collective imagination. Shows like LA Law glamorise a vocation distinguished by its curious use of language. In trying to come up with a working definition, here’s the best I could do: impenetrable legalese plus knowledge of precedent equals lawyer. No one (well, no one here) is suggesting we do away with lawyers, but many have suggested – and some have gone so far as to institute – Plain Speaking campaigns that demand clear, concise English (or French, or Swahili, or Urdu) from the law profession, regardless of where they might practice their art.

While law reformers are busy taking a wet-ndry vacuum cleaner to legalese, management scientists, like buzzards, are circling the corpse, picking at the offal. There are many examples of plundered legalese in today’s boardrooms, but perhaps the most egregious is the term “actionable”. According to the Legal Encyclopedia, here’s what “actionable”, a particularly clunky adjective, means to someone who has completed four years of law school: “Giving sufficient legal grounds for a lawsuit; giving rise to a cause of action.” And here’s what “actionable” means to Ned in Sales: “A task to be acted on or completed, preferably with great immediacy, and with a measure of exasperated gesticulation and histrionics. Best done with loosened tie and harrowed expression on face.”

Before we investigate the cultural psychosis involved in borrowing language from a legal document, we should note that for the past twenty years, we’ve been modeling our office life around the fake legal offices we see on television. We borrow their fashion (LA Law’s Corbin Bernson was an icon in his day), we borrow their corporate culture (how many unisex bathrooms proliferated after Ally McBeal?) and we borrow their dietary habits (how many eating disorders were justified by a 40 kilogram Calista Flockheart?). Nonetheless, this doesn’t quite explain the term “actionable” in everyday office use, unless we see it as an extension of allpervasive legal chic. Or maybe there’s something more sinister at work.

“Actionable” leads us onwards, to the derivative noun “action item”, which turns out to convey worlds of hidden meaning. The Free Management Library, a “complete integrated online library for nonprofits and for-profits” informs us of just how important action items are to the smooth functioning of a nonprofit or forprofit: the site orders us to “update and regularly review a list of open action items”, because open action items are “one of the first indicators that an organisation is struggling.”

What the Free Management Library is telling us is that any nonprofit or for-profit that gets nothing done is done for, which seems more like common sense than management science. Once referred to plainly as “unfinished business” or as an “incomplete task”, I read the term “open action item” as an attempt to invest the workplace with an element of panic. One doesn’t fear an unfinished task so much as dread it. But an open action item sings with imperative – it becomes an affront; unactioned action is the sort of laissez faire that can bring the universe to a grinding halt. Unactioned action sounds like the physics involved in a dying star.

Maybe Calista Flockheart’s emaciation wasn’t a result of self-starvation, but rather because of the calories she burned actioning action items. The term morphs the sedentary nature of most office work into the toil of a vigorous lumberjack – it conjures up hacking, sawing, chopping, mowing. A person who actions an action item is much more vital than someone who completes a mere task. This language is meant to imbue the mundane with the sweat of a muscled, sun-grilled oilrig worker. If I were to consider the writing of this column as the actioning of an action item, I’d be wiping perspiration from my brow instead of wiping muffin crumbs from my shirt, as I’m doing now.

As actionable as my column writing may be, and as open an action item it is until I file it, I can’t help thinking of it as little more than a task in need of completion. It’s doubtful that the fabric of the spacetime continuum will collapse if it remains unactioned, and thus we should always try to avoid language that hysterically invests the everyday with the exalted. Coupled with the term “action item”, we can see that “actionable” is meant to deliver us into the dark realm of As Soon As Possible, with a lengthy stopover in the Land of Incomprehensibility. And if incomprehensibility is your intent, where better to go for inspiration than legalese.

The next time we turn on the television and tune in to the antics of a fictional legal team, let’s concentrate on their labyrinthine personal relationships rather than the machinations of their profession. And, even more importantly, let’s stop pecking at their language to furnish our own. It’s like Ally McBeal said: “We’re not only wired to want what we can’t have, but we’re also wired to want what we really don’t want.” What we don’t want is to make less sense. Here’s hoping the good folks of the Plain Speaking campaign can save us from ourselves.