The end of the road for Manto 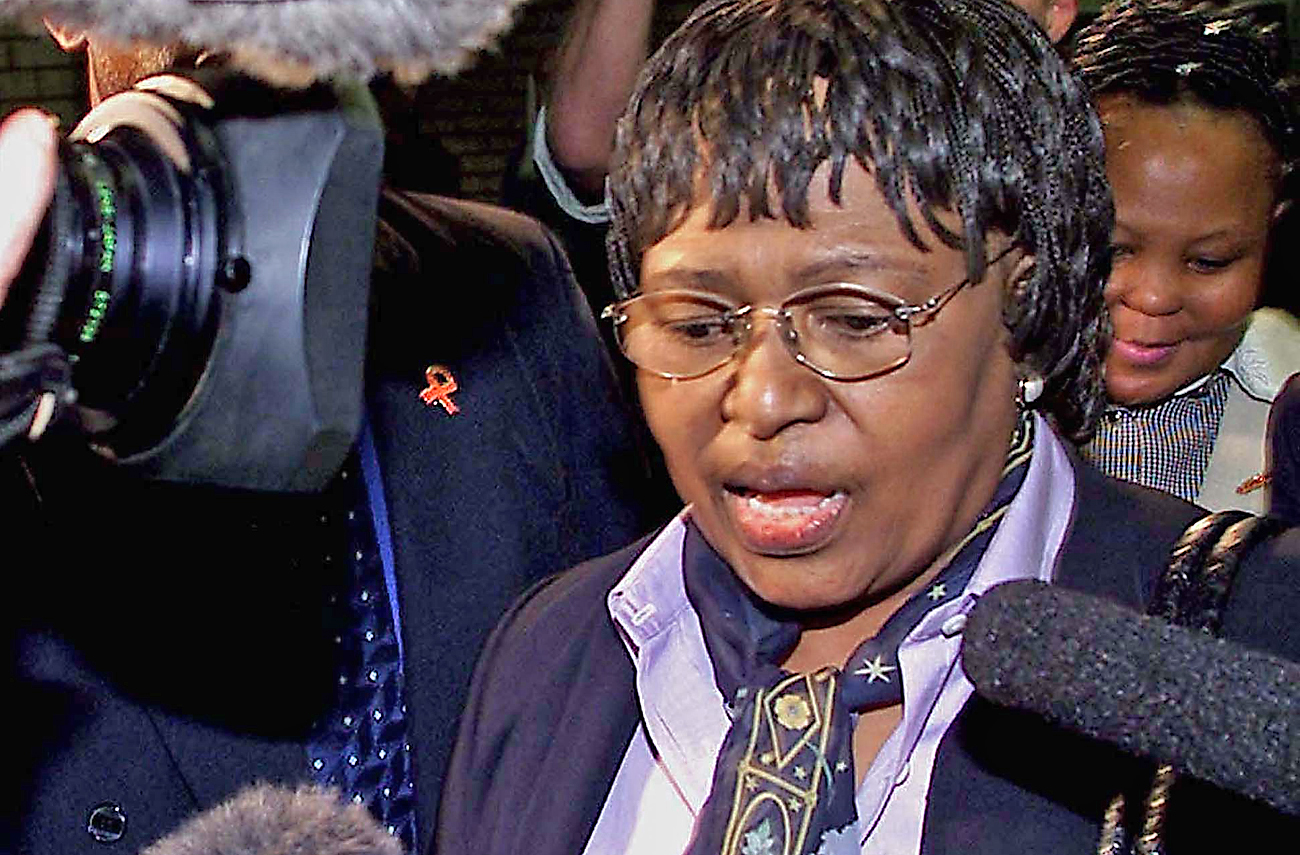 To understand some of the reaction to Manto Tshabalala-Msimang's death, you have to know this: she belonged to the ANC for about 50 years. When the party was banned she was one of the first with the balls to go into exile, staying there for 30 or so years. So, in her passing, the ANC, and South Africa has lost a giant of “the struggle”. She was a textbook example of someone who literally gave her all for democracy, to improve the lives of the people. And she was a fighter who wouldn't give in. Sadly, that's not what she's going to be remembered for.

South Africa has a huge capacity to forgive. We saw that on Reconciliation Day. Not many people are going to speak ill of her, even though they couldn’t stand her while she was health minister. It’s probably a good thing, one shouldn’t speak ill of the dead after all. Her obituaries will describe her as “controversial”, which is code for “she may have led to many other people needing premature obituaries”. They’ll make veiled references to the beetroot and garlic, her hatred of antiretroviral drugs and her slightly odd behaviour in public and in hospital. But that is only part of the story.

Unfortunately, the name “Dr No” is likely to stick in the popular imagination. She was the face of the Mbeki government’s Aids policies. The policies were wrong and she was the person who publicly punted them, supported them and made them happen. She was the person who supported Mathias Rath and his concoctions that made people stop taking the life-saving medicines that were available. It was she who claimed, in public, that HIV did not necessarily cause Aids. All of that would make her responsible, in some way, for the people who could have been helped, had ARVs been available in public hospitals. She didn’t give them the disease. She didn’t kill them herself, but she also refused to listen to arguments that could have led to them being saved.

Mantombaza Tshabalala-Msimang was born in Durban in 1940 and ended up at that school of ANC learning, the University of Fort Hare. After the ANC was banned, she was asked by the party’s top leaders to go into exile. She joined a group of other young ANC members including Thabo Mbeki. They were instructed to get themselves to Tanzania where the ANC would take care of them. But with no transport arranged for them, they took the only alternative. They walked. After slipping out of South Africa, they got as far as Zambia (then Northern Rhodesia) where they were stopped by police. This group of young people was kept in one room for several months. That’s how far and how deep her association and relationship with Mbeki ran. It was a friendship that lasted for nearly 50 years.

Eventually, they were released and made their way to Tanzania. From there she and a couple of others were shipped to the Soviet Union. The USSR was in the business of helping liberation movements at the time, and off to Leningrad she went, where she enrolled at the First Leningrad Medical Institute. That’s where she learnt her medicine and her Russian.

It must have been quite a thing in the 1960s for an isiXhosa-speaking person from Durban to end up in Leningrad. Studying medicine, nogal. She may have been many things, but stupid was never one of them. She once explained how she had to be on her guard at all times, along with her comrades. She was scared the National Party’s security police would catch up with her, no matter where in the world she was. That must have stoked her anxiety, and perhaps a touch of paranoia.

She then went through a series of ANC postings in friendly African countries, including Tanzania again, and Botswana. It was there that she was accused, according to the Sunday Times, of stealing from a patient. But that only emerged years later.

Eventually, she set foot on home soil again in 1990. She became an MP in 1994, was chairwoman of Parliament’s health portfolio committee, and then, briefly, deputy justice minister. When Mbeki became president, he promoted her to health minister. And that’s where the trouble started.

It’s difficult to know what she believed about HIV and Aids before that time. It’s obvious though that she and Mbeki were in complete agreement about Aids, its causes and, crucially, ARVs. Were she not, she wouldn’t have lasted long. After Mbeki’s comments about syndromes and viruses caused such a stink, he withdrew from public debate on the issue. She was quite happy to plough on, to fight the fight, to speak about it, to shout her beliefs from the highest mountain or nearest rooftop.

Perhaps the incident which crystallised the public image of Tshabalala-Msimang was her interview with John Robbie on Talk Radio 702. He had taunted her for a while, asking if it was true she didn’t believe HIV caused Aids. She eventually came on his show. A debate about science deteriorated very quickly. At the time, Robbie called everyone on air by their first name. Whether judges or presidents, if you came on The John Robbie Show, you got the first-name treatment (memorably, Judge Richard Goldstone, when called Richard, responded, “Do I know you?”). Manto wasn’t going to put up with that. Her response, “I’m not Manto to you” became famous. It was a First World white media meets African ubuntu moment. It was about dignity and respecting her office.

But she dealt with it terribly. She was emotional, angry, undignified. And she refused to say, in public, that HIV caused Aids. Things went downhill from there. She refused to provide ARVs to people who needed them, famously calling them “poison”. The Treatment Action Campaign had to go to court to get Nevirapine administered to pregnant women. Remember, this was a medicine that had been proven beyond a shadow of a doubt to stop the transmission of HIV to unborn babies. The delay in just that one action led to thousands of children having HIV.

When public anger and the TAC started to gain momentum, she and Mbeki appeared to start backing down. But there was certainly no political will, and every mention of ARVs was accompanied by a claim that nutrition was as important. At the same time, following her cue, Mpumalanga’s health MEC, Sibongile Manana, had a doctor fired for allowing an NGO to provide ARVs free to rape victims.

Eventually, Tshabalala-Msimang took ill and, fantastically, had a liver transplant. The cause of her illness: cirrhosis. But, and her doctors were adamant on this point, not that kind of cirrhosis. It was actually an auto-immune problem. More than that required a medical degree to understand. Seizing the opportunity, the TAC and then deputy president Phumzile Mlambo-Ngucka began communicating and things started to change. But it was only once she’d actually left the health ministry that the real ARV roll-out started.

Over the years, I had the opportunity to get up close and personal with Tshabalala-Msimang. She was a warm and friendly human being. She took your hand in both of hers, and looked into your eyes when she spoke to you. She took an interest in how stories were filed, the technology of the thing. I spent a few hours with her at her home in Pretoria in 2007 after her liver transplant. It was freezing, so cold that her husband, Mendi Msimang, then ANC treasurer, couldn’t leave the kitchen. He was gracious, but clearly nervous that a member of the media, which in his view had abused his wife so terribly, was in their home. It wasn’t a BEE house, rather something someone in middle management at an insurance company might own. There was a massive TV in the corner.

In the lounge we sat, talking, chatting, discussing her history with Mbeki, how she joined the ANC, what life was like in Russia. She was adamant that nutrition was as important to fight HIV as ARVs were. She was charming, even funny. It was not what I had expected. She also took time to ask about me, my life and story. Towards the end I thought there was a fifty-fifty chance we’d end up watching that afternoon’s rugby together.

But there was always something strange about her. She held an invitation-only press conference upon her return to the health ministry after her transplant. She took a few questions, but was hugely protected by her director-general, the imposing Thami Mseleku. Afterwards, her lunch was brought in. Lettuce and olive oil.  Strange sense of humour, that

The final indignity was the claim that she’d got drunk in hospital and abused staff while receiving treatment. She was furious, as was most of government. There were promises of legal action and the usual furore. She just refused to talk about it and didn’t seem willing to pursue the matter in court.

At the ANC’s manifesto launch in East London this year, she gamely came along. There was a massive celebratory banquet the night before. She sat a table with a few sponsors and diplomats. Alone. She appeared grateful when I went up to speak to her. She looked friendless. It must have been an awful way for her contribution to the ANC to end.

Tshabalala-Msimang’s contribution to our democracy is huge. We should remember her for that. We should remember that she gave up almost her entire life, put herself in danger, and left her family for the cold Russian winter, in the hopes of making things better for her people. She achieved that, and lived to see a better life for all. For that, we should be grateful. But her legacy is also the deaths of hundreds of thousands of Aids sufferers who could have been saved had her beliefs been different.