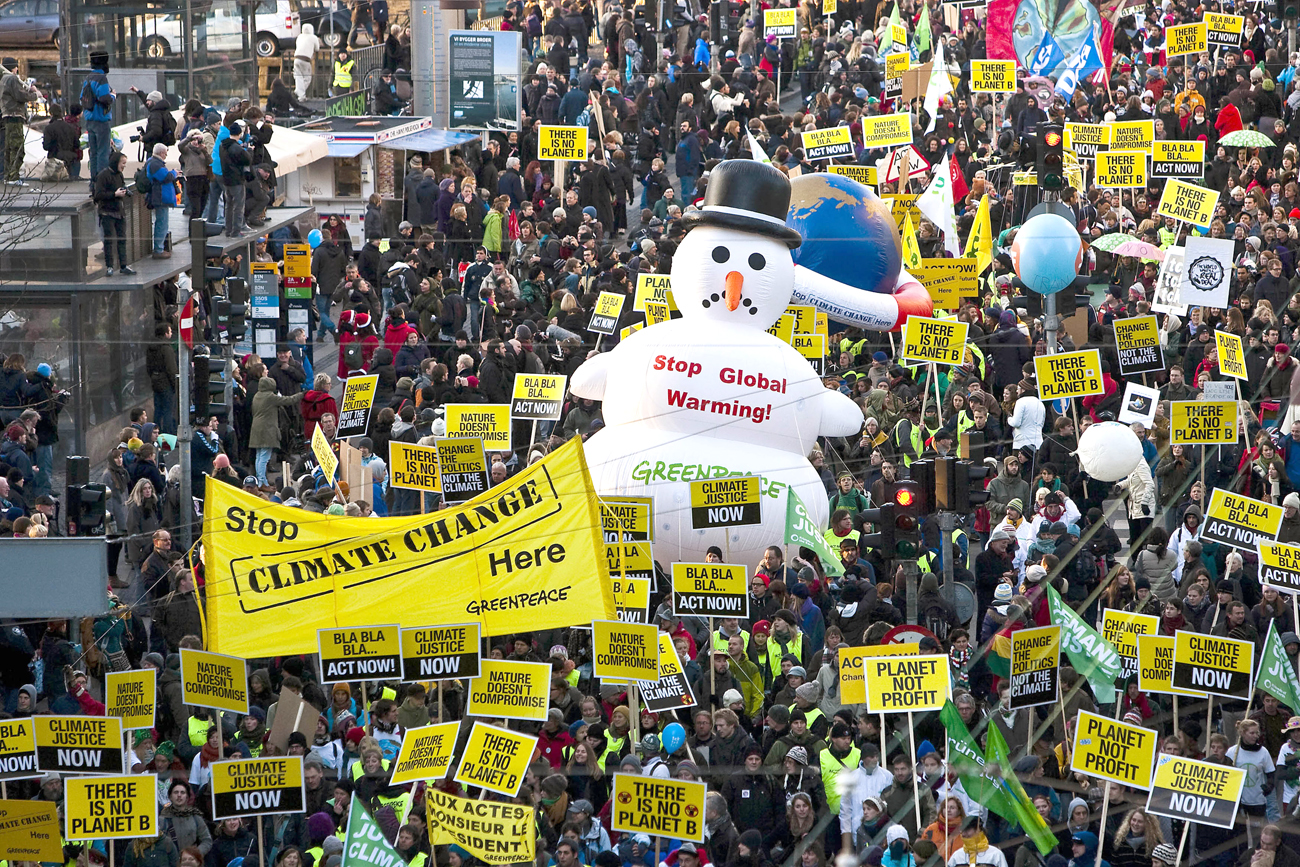 While the Copenhagen climate conference delegates await the arrival of the really big guns, presidents, prime ministers, and the like, conferees act out the international diplomatic equivalent of kabuki over the trade-offs and conditions in a treaty discussion draft, as well as those contained in earlier working papers and non-papers. Outside the conference centre, tens of thousands of international demonstrators clashed as well – this time with Danish police, rather than with each other, as they carried banners demanding “climate justice”. By the end of the weekend, nearly a thousand of the demonstrators had been detained, although Danish police released almost all of them a few hours later.

Inside the Bella Centre, delegations have been looking at Friday’s negotiating text, and observers said this text continued to underline divisions between the globe’s wealthy nations and the rest. Virtually no one expects this text to be the final version of an international treaty. Rather, it is designed to draw attention to the crucial issues the world’s environment ministers must address as they, in turn, set the stage for up to 110 heads of state and government who will attend by the closing days of the meeting.

A few days earlier, third world delegates had expressed public shock and dismay over a non-paper prepared by the Danes to get negotiations off to a start. By the time the document went public in the media, there was much stylized renting of garments and the donning of sackcloth and ashes. Typical of such comments, Ambassador Lumumba Stanislaus Di-Aping (permanent representative of Sudan to the UN and chief negotiator for the G-77) had said, with actual tears rolling down his actual face, “We have been asked to sign a suicide pact.” In reality, Di-Aping – and many other delegates – had already seen and studied the non-paper for over a week and had even provided their comments about this pre-conference document…

Yet even the newest draft document, the one released on Friday, still sets no firm figures on financing or on cutting greenhouse gas emissions. It does say all countries – together – should reduce emissions by a range of 50% to 95% by 2050, and rich countries should cut emissions by 25 to 40% by 2020, in both cases using 1990 as the baseline year. And the draft extends the system set in motion by the 1997 Kyoto Protocol which establishes legal targets for emission reductions and penalties should they fall short but makes no such requirements on countries like China and India.

However, American delegate Jonathan Pershing said the draft text has not taken on the critical issue of carbon emissions from emerging economies. While Pershing received support from other developed nations, the EU also criticized the US, insisting that it could – and should – offer more commitments to advance the conference even cap-and-trade legislation is still pending in the American Congress.

The EU and Japan have also joined the US in objecting to the draft treaty’s language that requires developing countries to lower their emissions — only if those actions are funded from overseas. Citing the emerging economies’ rapidly rising carbon output, the developed countries want binding reductions for developing nations to be part of any political deal.

Meanwhile, Swedish environment minister Anders Carlgren said both the US and China (the world’s two biggest greenhouse gas emitters) need to be legally bound to keep whatever promises they make. The issue of a treaty that is a political document or an international law-style, binding document remains a key fissure between delegations, with no clear road ahead on this point.

China argues their nation has already made voluntary commitments to rein in emissions and that they should not be bound by international law to do this. In any case, the Chinese argument is that the rich nations have a major historical responsibility to cut emissions – and any international climate agreement must take into account respective levels of national development.

Back out on the chilly streets of Copenhagen, somewhere between 24,000 to 40,000 — or even 100,000 — (take your pick of varying police estimates versus a demonstrator guesstimate) marchers – including some dressed as polar bears to highlight the plight of this endangered species — headed towards the conference centre, waving banners that read “There Is No Planet B,”  “Nature doesn’t compromise” and “Climate Justice Now”. For the fashion conscious, Danish supermodel Helena Christensen was a demonstrator as well, although there were no reports she was dressed as a polar bear.

Photo: Arrested demonstrators sit on the ground as they are surrounded by police during a rally outside the U.N. Climate Change Conference in Copenhagen December 12, 2009. REUTERS/Christian Charisius

A slightly surreal “life imitates art” moment took place when conference delegates stopped their discussions to watch police and demonstrators (both polar bear- and regularly-garbed) clashing, then police arresting demonstrators, live on big flat screen TVs. Police said later virtually all those detained were eventually released, save for a handful who would actually be charged and would have to appear in court.

Copenhagen was not the only site for demonstrations. News reports say as many as 3,000 other protests took place around the world – from Papua New Guinea to Israel to Japan. Thousands gathered in cities across Australia – where demonstrators said they were marching in solidarity with Australia’s Pacific island neighbours – like the ones about to vanish below the waves if the seas rise much further.

After originally saying he would arrive at the beginning of the conference to allow him to make his trip to pick up his Nobel trophy and then do a victory lap at Copenhagen, Barack Obama is now scheduled to arrive in Copenhagen towards the end of the week. This should give some added heft to American efforts in the writing of the final document – and it may also bode well for the conference being able – ultimately – to produce broadly supported document. (It seems unlikely Obama’s staff would allow him to attend if the conference was about to blow up or melt down.)

However, regardless of Obama’s intentions, he is not going into Copenhagen with the kind of full-throated congressional support he needs for automatic passage of whatever he signs at the conference. This truth remains to toughest conundrum for the US delegation in dealing with other delegations.

The US House of Representatives has passed a bill that pledges to reduce emissions to about 17 % below 2005 levels over the next decade, but the Senate has barely begun to debate the issue — and the upper house remains divided by numerous factions and interests, not solely by party. Commentators are now calling this the Goldilocks problem – finding something not too harsh, not to soft, but just right – for the conference, for the US Congress — and for the American public. Easy to do when not everyone in congress is yet convinced global warming is actually a human-caused problem, as opposed to a naturally occurring one. Not.

The recently announced EPA finding and the regulations implementing that finding that stipulate greenhouse gases are a health issue is probably Obama’s trump card – if Congress continues to be unable to act. But, there is a downside: trying to remake the US economy by regulatory fiat, via the EPA regulatory route, would almost certainly lead to years of legal wrangling. Moreover, Obama needs congressional support and action on other key issues, not least the troop surge – and the cost of carrying it out – in Afghanistan. Then, not to be ignored, there is the pending health care reform package – as well as possible other, further stimulus and bailout packages to reenergize the economy.

Key issues and elements of the draft text

For more, read the BBC, the Washington Post, the New York Times and the AP.