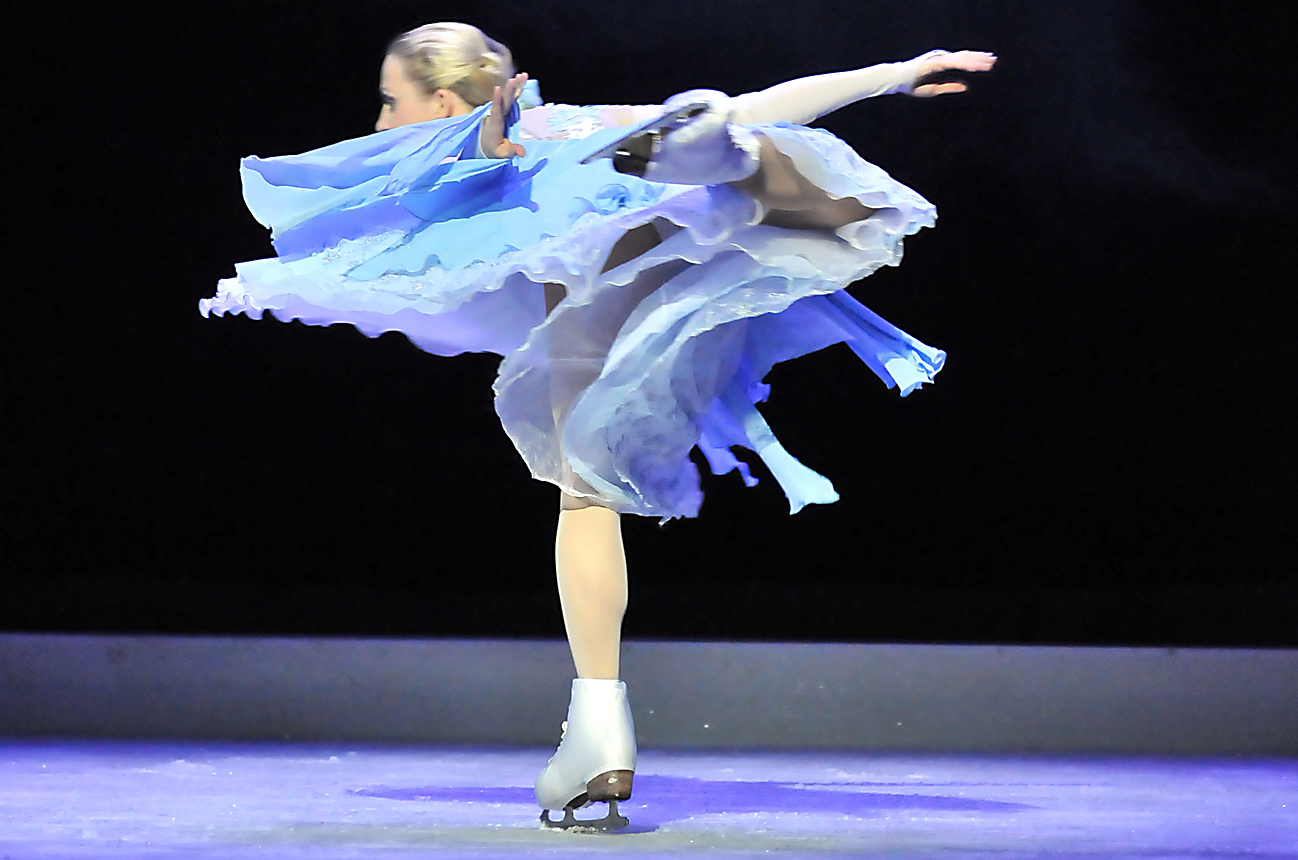 If you’re the parent of young kids, you’re not going to skate your way past this one.

Better hope you get a decent Christmas bonus, because you’ll be needing the cash for “Cinderella on Ice”.  Then you’ll need one of the big glossy programmes too, so you can figure out the plot.

For this is no ordinary Cinders. This rewritten version has enough of the traditional horrid stepmother stuff to grasp what’ s going on, but I wasn’t the only one swotting up at the interval so I’d get the gist of act two.

There are no fireplace and ashes, no pumpkins and mice. Not even a really clear Prince Charming, though after a while you assume he’s the one with the floppy blonde hair and dapper velvet jacket.

There’s even a bizarre moment where the music suddenly moves up several degrees of excellence and you recognise the melodies of “Swan Lake”. Suddenly the skaters playing Cinderella’s cohorts have become a chorus of dying swans. It sort of makes sense when you realise that the village girls are staging a performance of “Swan Lake”, with Cinderella as Odette. Now that must be a theatrical first – a ballet within a ballet, and all of it on ice. I guess all the costumes were left over from last year’s production of “Swan Lake on Ice”, and it would be such a shame not to use them again.

So you don’t get a traditional Cinderella, but you do get a pretty stunning event. The Imperial Ice Stars give an amazing show where you barely dare look away in case you miss someone being thrown though the air, whirling in ever-faster pirouettes, leaping, twisting or twirling in an amazing display of virtuosity.

You’d have thought there were only so many moves you could make on a relatively small patch of ice before it became monotonous, but at the end there wasn’t a soul that wasn’t spellbound. The costumes are flamboyantly glorious, and the scenery of a kitsch village square has the clever addition of out-of-control clocks to add a sense of urgency.

The music was specially written for an ice show, rather than forcing the choreographers to work around music originally written for a ballet. It’s the perfect accompaniment to the movements, but highly forgettable. That’s highlighted when the “Swan Lake” scenes clearly show the difference between being perfectly adequate and the product of Tchaikovsky’s genius.

What makes the whole show highly engaging is the tongue-in-cheek humour that has thawed the haughtiness the Imperial Ice Stars have shown in previous years. Their movements are often comical, and there’s a lovely scene where they stop their flowing movements to break into staccato bobbing. It swells into a full-blown chorus-line of Irish dancing on ice. Try doing that on ice skates, Michael Flatley.

Olga Sharutenko as Cinderella and Andrei Penkine as her suitor are brilliant, of course, but the rest of the crew are equally great. All are given a chance to display their talents, each outdoing the last in how high they jump or how fast they spin.

It’s a thrilling show. You’ll be thankful your kids made you go, even if you have to give up a trip to Umhlanga to afford it

“Cinderella on Ice” runs at Montecasino’s Teatro until 10 January 2010.