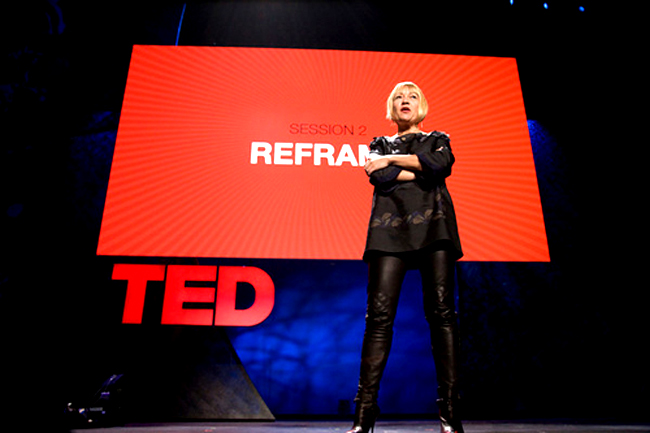 Due to the graphic nature of Cindy Gallop’s talk at TED 2009, the cleverest people on earth decided they couldn’t upload said video to the main archives – and opted instead for a blog. Here at The Daily Maverick we’re not as smart but we’re slightly less prudish, so we embedded the original video (after some helpful context which you should really read first).

It’s never advisable to do this without serious editorial supervision, but there’s a reason TED capitalises the important words in the “About” part of its brochureware: as in, “TED is a small nonprofit devoted to Ideas Worth Spreading”. The organisation, which started out in 1984 as a conference bringing together speakers from the worlds of technology, entertainment and design (TED, get it?), has indeed become one of the planet’s most interesting and provocative venues for the expression of original thought.

Naturally, attendance at the main annual event in Long Beach, California, is by invitation only. If you think this makes TED elitist, you’re absolutely right. Don’t feel too bad that you’ve never cracked the nod, though – here’s what Bill Gates once had to say about it: “The combined IQ of the attendees is incredible.”

Also, to paraphrase Whoopi Goldberg, TED isn’t elitist-elitist. It allows you to see how clever other people actually are via the interwebs. Just by clicking on the “play” button in an interwebs video (if you do this from South Africa, you’ll need to be a little patient), you can see Stephen Hawking talking about the origin of the universe, Isabel Allende discussing creativity, and E.O. Wilson making a plea on behalf of all creatures that humans learn more about the biosphere.

At TED 2009, speakers included Amazon.com CEO and founder Jeff Bezos, acclaimed entrepreneur and inventor Jay Walker (smart guy, unfortunate name), and the man who sequenced the human genome, Craig Venter (ja, at first I also thought they were talking about Bill’s son). But the speech that caught everyone’s undivided attention was “advertising guru” Cindy Gallop’s, who spoke about her recently launched website MakeLoveNotPorn.com.

“As I make clear in my talk, MakeLoveNotPorn is designed to address an issue that would never have crossed my mind if I had not encountered it within my personal life and specifically, because I date younger men who tend to be in their twenties,” the fifty-something Gallop told a TED interviewer. And the issue is? We can’t really be specific, because this is a family website, but suffice to say it involves modern pornography’s ubiquitous portrayal of the “favoured” landing site of the male, erm, issue.

Given the above, the incredible thing about Gallop’s speech is its tastefulness. She started out as a theater publicist in the UK, and then made the move to advertising, eventually setting up the New York office of Bartle Bogle Hegarty (which won major awards under her tenure), so she knows a thing or two about pitching her ideas at the appropriate level.

Watch Cindy Gallop’s talk at TED 2009. Please be advised that the content may be offensive to some viewers: