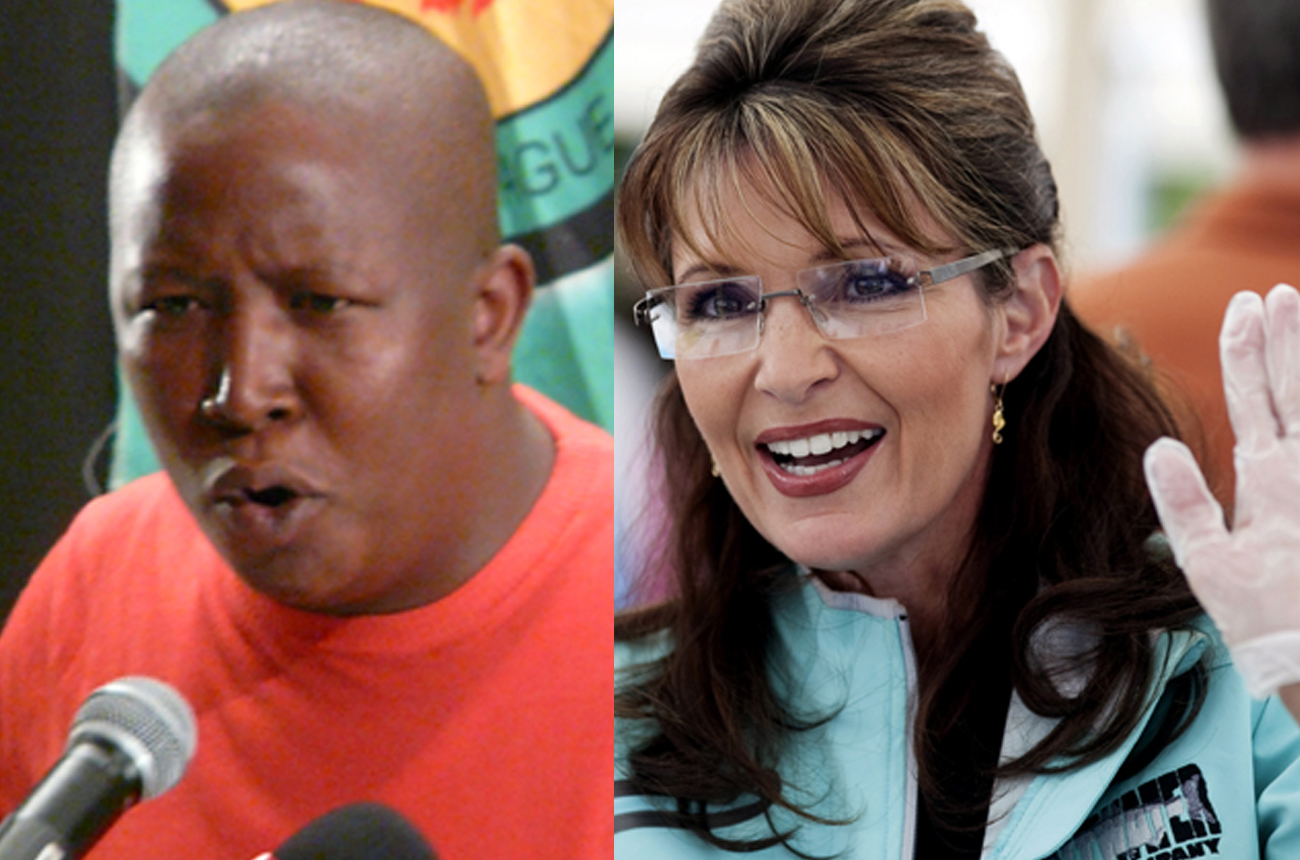 Is Julius Malema the Sarah Palin of South Africa? And we mean it in a good way. Well, maybe not entirely good way, but perhaps with good bits. Actually...

Even though they come from different sides of the political spectrum, Palin and Malema share so many characteristics it’s creepy. You wonder slightly whether they are not both using the same advisors or something.

They can definitely both see Russia: Palin physically, Malema ideologically.

Both are devotional in their belief structures: Palin to the right-wing cause, Malema to the hallowed ANC tradition.

Both tend to be contradictory and a bit all-over-the-place in their public statements. Columnist Maureen Dowd, in a memorable recent column in The New York Times, said Palin’s syntax was reminiscent of Star Wars character, Yoda.

“And I think more of a concern has been not within the campaign the mistakes that were made, not being able to react to the circumstances that those mistakes created in a real positive and professional and helpful way for John McCain,” Palin said of her epic journey, at least in her mind, into the heart of darkness, i.e. her own party’s campaign.

Malema is a better speaker, but he has the same trait of firing first, then explaining later. Then apologising.  Then unapologising. Then demanding that others apologise.  Then moving on to the next miss-speak without a moment’s self-doubt or self-consciousness.

In just the last two months, Malema has so far been wrong about Nedcor’s sponsorship of athletics, supporting Athletics South Africa over the Caster Semenya affair and supporting Eskom CEO Jacob Maroga, to name only a few. A lesser character would be more stung, more remorseful and more repentant.

But like the person who exacerbated the sinking John McCain’s presidential bid without an instant of penitence, Malema soldiers on, seemingly untouched by self-doubt.

Most importantly, although they come from different ends of the political spectrum, they are both extremists, who crucially don’t recognise themselves as extremists. I suspect they don’t consider their views to be particularly extreme. They simply consider themselves to be right.

This is partly why the political class find them so frightening: they just won’t listen.

Not only are they unhindered by the wise and wizened long-time party grandees; they consider their strength to be the very fact that they defy conventional wisdom within their own parties. Even if it is real wisdom they’re defying.

It’s amazing. They gain credence from being the representatives of the “core” values of the organisations, manfully struggling to “take back” the true essence of the party which has hatefully been eroded by the compromisers and the ones pathetically fearful of initiative and forward thinking.

This is why they both come across as slightly juvenile. And equally why it’s so easy to fall into the trap of patronising them. They have the wilfulness of adolescence, and the self-assurance of people who appear to be without life’s harsh lessons.

The headline category for this kind of politician is “populist”. But in both their cases, they go way beyond this simplistic category. In some ways, the populist categorisation is positively misleading.

An interesting piece by Lee Siegel in The Daily Beast compares Palin to author Ayn Rand.

Siegel says Rand might have been a crackpot philosopher, or a lousy novelist, or a highly neurotic egotist desperately in need of some self-criticism.

“But no one seriously considered her as a powerful mythmaker, whose archetypal tales of individual initiative and self-creation respond to the way a lot of Americans like to think of themselves.”

Isn’t this exactly Malema? In positioning the ANC Youth League at the outer edges of ANC policy, Malema is responding exactly to the archetype first established by one Nelson Mandela, who as a young man in the precisely the same ANC Youth League drew the ANC toward the then conventionally unthinkable – the armed struggle.

Malema constantly talks about something outsiders find slightly arcane and procedural, “the role of the youth”. It is neither; it’s an attempt to position the league as, what he sees as, the sacred historical mission of the organisation.

In her NYT piece, Dowd upbraids US President Barack Obama for ignoring Palin’s strengths. “Palin can be stupefyingly simplistic, but she seems dynamic. Obama is impressively complex, but he seems static. She nurtures her grass roots while he neglects his.”

She describes Obama as “the cerebral one” and Palin as “the visceral one”, saying, “just like the disastrous and anti-intellectual W., this Visceral One never doubts herself. The Cerebral One welcomes doubt.”

This is so Malema it hurts.

Yet even in their visceral appeal, both are deeply dangerous to their respective parties. It’s arguable they are similar in another way too; they are dragging their parties to the extreme and out of the political centre.

It’s all very well to be ideologically pure, but in reality, however animated and interested people might be about them and their ideas, what ultimately wins votes is not ideological purity, but effectiveness on the ground.

And that is almost always delivered by the ones in the centre.

When push comes to shove, Palin’s and Malema’s star appeal could be the very thing that sinks them – and their parties.