Boeing shoots down a plane with a laser beam

Boeing shoots down a plane with a laser beam 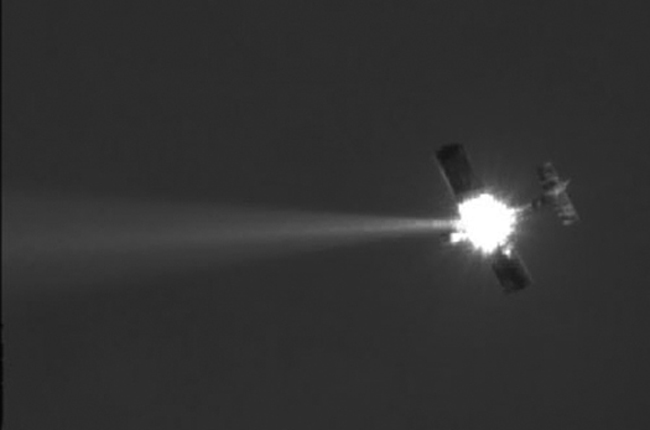 In a woefully under-reported historic event, Boeing has publicly admitted to shooting down an airplane. With a frigging laser! An unmanned airplane and in a planned test, admittedly, but it's still pretty cool and scary in roughly equal quantities.

It’s an event that will spark a renewed flow of money into stealth technologies and, in the long run, a reduced focus on air supremacy in the military strategies of rich countries. Because in the foreseeable future, if-you-can-see-it-you-can-shoot-it mobile weapons systems will be a reality, leaving even the most high-performance aircraft essentially defenceless.

Unless the aircraft get the laser systems themselves, like the  Boeing airborne laser that is already in development.

Boeing this week confirmed that it successfully shot down drone aircraft using a single laser beam. It is not providing details like the maximum reach of its laser, how long it needs to maintain focus on the target to destroy it, what the reload time is or how many shots it can power from its current energy storage system, but those are just that – details. With the concept proven to the satisfaction of the American Air Force there should be no shortage of money for swift further development.

Crucially, the tests included Boeing’s Matrix system, short for Mobile Active Targeting Resource for Integrated eXperiments. Matrix is truck-drawn, which makes it almost as mobile and subject to camouflage as any piece of modern artillery can be.

Much of the attention on laser weapon development has been on use to shoot down incoming missiles, ever since the Reagan era Star Wars plans. Planes, even unmanned vehicles, are larger, slower targets, though they can take more punishment before falling from the sky. Tracking them is easier, and the window to destroy them longer, and the last fundamental technical problems now seem to have been overcome.

That potentially shifts the advantage back to ground-based systems. In recent decades it was better to be the guy in the fast-moving supersonic jet with accurate missiles than the guy sitting on the ground just waiting to be shot at. Now the guy with the biggest power source (and therefore the longest reach and fastest time-to-destruction) will win nine times out of ten. And it’s hard to mount a really, really big battery on top of your fighter jet.

Mooted laser defence systems are either utterly impractical or will make planes more susceptible to traditional air defence. Similarly, throwing out reflective chaff is no good unless you are moving quite slowly, for instance.