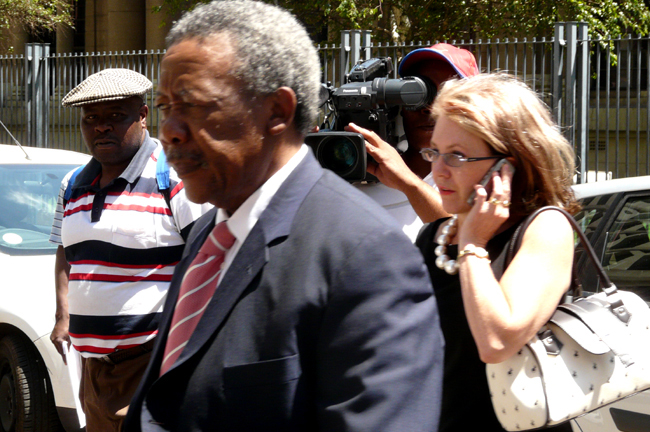 It was a day of high emotion and ruthless intent at the Jackie Selebi trial. No quarter was held and none was given. Defence counsel Jaap Cilliers put it to witness Vusi Pikoli that there was a dark, ulterior motive in charging the accused - one that cut to the highest levels of justice in South Africa.

“Counsel, I take offence to that,” Pikoli fired back.

In a session shot through with drugs, conspiracy, deadly violence and corruption, twice Selebi was called “evil” – once in Pikoli’s testimony, and again in reference to a statement by the former top cop’s nemesis, ex-OR Tambo airport security boss, Paul O’Sullivan.

Covering ground as wide as the open spaces of the Kalahari, former National Prosecutions Authority boss Bulelani Ngcuka was said to have wielded influence long after his departure from the crime-fighting body, right up to the time Jacob Zuma was let off the hook.

And there were tears of mutual relief when former National Prosecuting Authority boss Vusi Pikoli met Jackie Selebi on 11 November 2006, and the former police commissioner told him that he never accepted money from Glenn Agliotti. A grateful Pikoli immediately conveyed the sentiment to President Thabo Mbeki. Pikoli and Selebi had known each other since 1980, as ANC exiles in Lesotho and later established a close relationship from their work in high office. But that’s where the camaraderie ended. Like earlier witness and former Agliotti fiancée Dianne Muller, Pikoli turned to Selebi in the South Gauteng High Court during testimony and called him a liar. Vusi Pikoli on his way to court.

But the former NPA chief was roasted by defence counsel, Jaap Cilliers, over an alleged conspiracy involving Pikoli and his predecessor, Ngcuka. Cilliers said they wanted to charge Selebi because he knew Pikoli’s wife received millions of rands in free shares in a Kebble-related company, and that Ngcuka was prepared to drop charges against businessman Billy Rautenbach (also a state witness) in exchange for a bribe and access to mining concessions in the Democratic Republic of Congo and Zimbabwe. Cilliers forcefully claimed this was at the expense of indicting those who killed mining magnate Brett Kebble in 2005, including “masterminds” John Stratton (an Australian fugitive) and Agliotti.

Pikoli looked extremely uncomfortable during much of his time on the stand, claiming the Selebi investigation was instigated purely by statements made by former Kebble security bosses Paul Stemmet and Clinton Nassif, and not because Selebi had dirt on him and Ngcuka, or because Selebi wanted to kill off the Scorpions. Nor, Pikoli said, was it a conspiracy between the Scorpions and American and British foreign services, as alleged by Selebi (and relating to allegations made in the Special Browse “Mole” Report of a coup plot against Mbeki by Jacob Zuma).

In unremitting cross-examination, Cilliers drilled down on whether Selebi had ever called Pikoli into his office to quiz him about his wife’s free shares in Kebble-related holding company, Vulisango, and given to her by a former director general of National Intelligence, Gibson Njenje. Cilliers said the shares were worth millions of rands, and was unconvinced that Pikoli, whom he established was married in community of property, knew little about their value, or from whence they came.

When Cilliers said Selebi claimed to have called Pikoli into his office to discuss his wife’s shares, Pikoli turned to Selebi and said: “That is a lie.”

Cilliers also said: “You said [to Selebi] that your wife is your Achilles heel.”

Pikoli replied: “It’s an evil and cruel mind that can concoct such a thing.”

Pikoli recounted a trip to the Eastern Cape for an anti-corruption meeting, where Selebi asked why the charges against Billy Rautenbach were not being dropped. When Pikoli asked him why, Selebi said: “I am in possession of a letter that can cause embarrassment to Ngcuka and the NPA.” Pikoli testified he thought little about it at the time, until Gauteng director of prosecutions, Charin de Beer, expressed concern in early 2006 that police investigating Kebble’s death were not cooperating over cellphone records that showed the names of Agliotti, Nassif and Selebi.

Pikoli informed justice minister Brigitte Mabandla and former president Thabo Mbeki of this. Mbeki said: “Why don’t you just raise the matter with [Selebi].” At this point Pikoli and Selebi met in Pikoli’s office, where Pikoli asked Selebi if he had ever received money from the Kebbles. “He denied that. It was very convincing,” Pikoli told a packed court. “I believed him and told him it came as a relief to me. I cried tears of relief and he also cried.”

But Pikoli said he found Selebi unconvincing on other issues, including foreign crime intelligence reports and an email relating to Agliotti.

Selebi later showed Pikoli two videos; one of Agliotti being interviewed by one-time crime intelligence chief, Mulangi Mphego, the over whether Selebi had received any Kebble monies. At the time, the NPA had difficulty securing a police docket in a related matter. Pikoli spoke of the “bad blood” between the Scorpions and the SAPS, and approached Mbeki to intervene. Mbeki spoke to Selebi, who said he didn’t know where the docket was, although the Scorpions later found the document. Pikoli then met Mbeki, Mabandla and Ngcuka, and later, safety and security minister Charles Nqakula, saying he was having further problems getting documents relating to Operation Bad Guys, which was investigating Selebi. Mbeki was concerned about national security, but was also reluctant to meet with Selebi, who Pikoli said was not cooperating. Pikoli became frustrated, asking for direct intervention by Mbeki, before approaching the courts. At this point, Mbeki stalled him, telling Pikoli that he hadn’t given Selebi much time to respond.

Pikoli said Mabandla wanted to know the strength of the case against Selebi, which led to a meeting with senior SAPS crime intelligence officials, including Selebi, and led to search warrants being obtained, and the roping in of NPA Asset Forfeiture Unit head Willie Hofmeyr. Selebi had allegedly spoken to Pikoli over his wife’s shares in a Kebble company, which led state prosecutor Gerrie Nel to ask Pikoli: “Did you withdraw any matter against the Kebbles?”

Pikoli was stonily silent for a long time. Then he said (as he did later under cross-examination) that he ignored the detail of every crime and let the prosecutors get on with the job.

Nel then asked if Pikoli ever discussed his wife’s shares with Selebi.

Pikoli said: “Not once did he ever summon me to his office to raise the question of shares.”

Cilliers’ brutal and lengthy cross-examination implied Pikoli’s wife received the shares the day he became head of the NPA. Pikoli replied he knew of the shares as far back as 2001, but did not know their value or link to the Kebbles. But he acknowledged knowing of pending cases against the Kebbles at that time, and told the court he had personal “free” shares in another mining company he helped set up, which he declared in the public record.

Cilliers then tried to show that a case against Brett Kebble’s father, Roger, was dropped at the time Pikoli assumed control of the NPA, although the case was, in fact, struck off the roll by a judge. Cilliers told Judge Meyer Joffe he did not see the difference, and Joffe disagreed.

Pikoli said: “I lost sight of that matter.”

Cilliers returned to allegations that Ngcuka attempted to bribe Rautenbach, and that this coincided with Selebi telling Pikoli he was in possession of a letter that could embarrass the NPA. Cilliers implied there was a conspiracy to charge Selebi, which included affidavits by Airports Company South Africa employee (and supposed British spy) Paul O’Sullivan, who believed Selebi was in bed with gangsters and wanted to bring down a “wicked and evil chief of police”.

Pikoli said, “It was common cause O’Sullivan and Selebi had problems.”

Pikoli claimed Mbeki suspended him as NPA boss because he wanted to prosecute Selebi. And he was later fired by interim president Kgalema Motlanthe, despite the Ginwala Commission saying he was fit for office.

Cilliers asked why the criminals who killed Kebble were used to get Selebi.

Pikoli said: “You need to use criminals against criminals.”

He said: “We were painfully aware of what was likely to happen, in showing that the man at the top [taking bribes] is the national commissioner. So, if this is true then the gamble is worth taking.”

Pikoli said he was at one time convinced that Selebi did not take cash, but the long investigation changed his mind.

“For me what was critical was the outcome of the investigation.”