Indian eunuchs win right to be ‘others’ 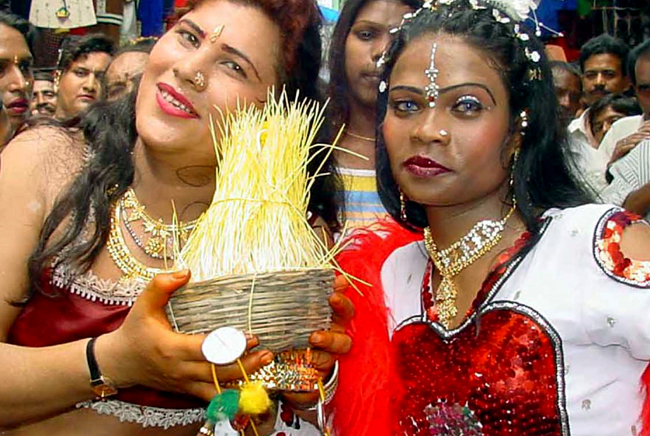 Variety makes the world go round, whatever Big Brother may think. So, in culturally conservative India, the millions of eunuchs and transsexuals known as hijiras, are jubilant they can now be listed as "others" on electoral rolls and voter identity cards - as distinct from males and females.

“The inclusion of eunuchs and transgenders as ‘others’ gives us a separate identity which is what we have always wanted,” Laxmi Narayan Tripathi, founder of campaign group Astitva, was quoted by French news agency AFP. “This is a sign of a true democracy.”

As a group, eunuchs in India have been at the fringes of a society that is characterised by an immensely complex (albeit outlawed) caste system. The term includes cross-dressers and pre- and post-operative transsexuals. In past societies, men who were impotent or celibate were also defined as eunuchs. So, too, their description as religious specialists may have come from times when people who were strict Buddhists were strangers who came to live in other lands.

Until now, many of India’s eunuchs hadn’t voted in elections because they did not want to identify their gender on voter registration forms. AFP says they could write “E” for eunuch on passports and on certain government forms, but had failed to be accepted as a separate grouping at the ballot box.

While eunuchs are not typically intersex, their millennia-old history in places such as China, Arabia, Persia, India, Greece and Rome has seen them live a wide variety of social roles as courtiers, singers, government officials, military commanders and guardians of women – or servants – in the harem.

In South Africa – where eunuchs have never been a social class – committed individuals fought to have the “rainbow constitution” amended, because there was no protection for “intersex” persons under the Equality Clause in the Bill of Rights. The promulgation of the Judicial Matters Amendment Act of 2005 changed all that, by adding the term “intersex” to ”sex”, in definitions of human beings and natural persons, and this then revolutionised the law.

Until recently, South Africa relied on a common dictionary term for male and female: as per “male and not female” and “female and not male”.  Sally-Jean Shackleton, director of South African NGO Women’sNet, says human rights are not real until you claim them. “You need to be able to claim that right, unless other people facilitate your access to that right, such as nurses, doctors and administrators,” she says.

In this country, even the terminology is moot for people who share male and female characteristics. Shackleton says that sex determination is about the body, while gender is about perceptions and assigned roles (which in part make up a person’s identity). This means terms such as “intersexed” do not include definitions of transsexual, or transgender individuals, who may not fit into any specific form of sexual orientation, or the complete lack thereof. To this end, she prefers to talk about “gender variance”.

Photo: Eunuchs pose for photographs during a street procession called “Bhujria” in Bhopal, the state capital of the central Indian state of Madhya Pradesh, August 6, 2001. The annual festival is attended by eunuchs to offer homage and give thanks to the Hindu God Inder, the God of rain.