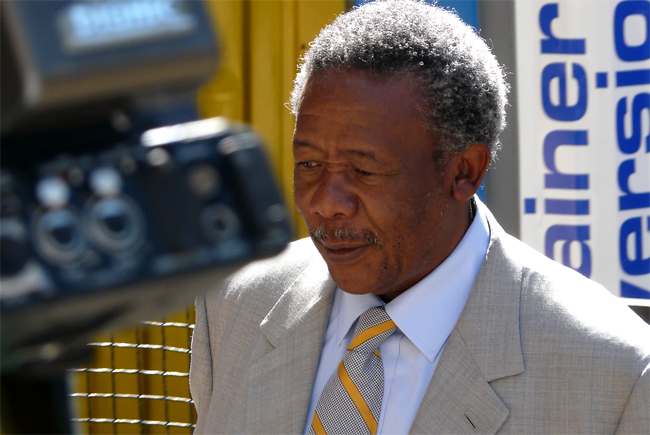 It was a day of intense emotions and restrained intent in Court 4B as prosecution and defence battled over a critical, but missing SAPS document. As the state tried to paint a picture of a generally corrupt relationship between a former top cop and a powerful drug lord, other high-powered cops and a lowly reservist sketched a picture of hubris, deception and skulduggery that cut to the heart of police intelligence.

It began when police reservist Aubrey Morris Shlugman responded to a robbery at an upmarket residential address in Morningside, Johannesburg. Hijackers had stolen two vehicles. The complainants were Israelis. While Shlugman was processing the theft, a white male and white female walked into the apartment. The white guy tapped Shlugman on the shoulder and handed him a cellphone.

Shlugman then spoke to Jackie Selebi.

Then he said: “That’s a good friend of mine. You must look after him.”

Shlugman established that the “good friend” was Glenn Agliotti – because he introduced himself. Three weeks later, Shlugman was at home on a Sunday. It was about 10pm. The phone rang. It was Agliotti. There was another problem at the same upmarket complex. “I can’t get hold of Jackie Selebi, because his cellphone is on voicemail,” Agliotti said.

“Why not phone the Sandton SAPS,” asked Shlugman. ”It’s only 200 metres from the complex.”

So began another day of testimony in the Jackie Selebi trial. A day in which defence counsel Jaap Cilliers got hot under the collar as a core witness made what he called “speculative” suggestions in evidence led by state prosecutor Gerrie Nel.

Next up on the stand was SAPS Commissioner Mark Hankel, the head of the information branch of police crime intelligence. The court was asked to prevent pictures of Hankel and subsequent witnesses being published in the press, as all were involved in covert operations concerning serious crimes and state security. Hankel “sees” everything, or just about everything, including documents from foreign security services.

But he hadn’t kept track of a missing file that should have stayed in his office, and which is now crucial to the prosecution of the former national commissioner. Nel led evidence that Hankel and two other very senior officers in crime intelligence were sent top-priority documents from the Customs and Excise branch of British government, asking questions about the drug-dealing habits of Glenn Agliotti. The questioning turned on whether Selebi showed Agliotti a British  drug liaison office document that queried Agliotti’s alleged international drug activities.

There was a single problem. In statements to the Scorpions, Agliotti mistook a name which appeared in another, similar document (one of six), although he testified to having seen an official British coat of arms on the file (dated 6 August 2004) that matched an original missing from Hankel’s filing cabinets. The other British documents didn’t have the royal letterhead, Hankel said.

Hankel, observing strict protocol, provided the British with feedback. Yes, they had noted Agliotti’s activities in a large mandrax bust worth R100 million, with his name being linked to a crime intelligence action called Operation Chaser.

“We do not willingly give details of South African citizens to foreign services unless it is a compelling case,” Hankel stated.

Hankel’s office never found the missing document, but Telkom and MTN data showed Agliotti’s phone record from 1 July 2004 to the 20 August the same year. Hankel told the Scorpions that Agliotti made 41 calls to Selebi in this time, with Selebi making 16 in return. Hankel couldn’t really say if they were voice-to-voice calls, as he is not a specialist in that area. Such evidence would need to come from intercepts, and that was a whole other story, under law, and with different telecom firms having different methods of analysing and storing such data.

But he said: “These were not call forwards, they were line calls. But I am not a specialist in this kind of data.” (He said one such call took 14 seconds, and came from a base station in a place called Milnerton.)

Cilliers heatedly objected in cross-examination, called this speculation and Hankel’s opinion only.

The British issued six drug liaison reports to SAPS in all, which mentioned Agliotti and former Kebble mining empire security boss, Clinton Nassif (who was later implicated in the killing of Brett Kebble). The reports said Agliotti was a drug kingpin. Chief prosecutor Nel was trying to prove that Selebi gave Agliotti a heads-up that the Brits were after him (as revealed in Agliotti’s statements to the Scorpions) – by showing him one of the documents. But which one? Selebi denied showing him anything. And an Agliotti statement provided a wrong name mentioned in the relevant document, which had an official “Her Majesty’s” coat of arms on it.

But Hankel remembered the insignia. And Cilliers said that was his opinion. And if there was  one material difference in a document, it excluded that document from evidence.

Nel objected: “That’s like saying if a person has blue eyes, and you forget that, you exclude that person.”

Hankel said: “I am not speculating, I was asked a question on which document fitted the description of what [Agliotti] stated.”

Cilliers questioned other detail in the document; whether it was worded as “an activity report” or as Hankel said, mentioned the word “activity” in relation to Agliotti’s ostensible drug dealing.

Cilliers said this was a report, addressed to Hankel’s high office, that went missing, and was then supposedly seen by Agliotti. Hankel was rankled at this juncture, and the judge stepped in to restore order.

It turned out this singular British report to Hankel’s office was “booked out” and never returned, and that years later – in February 2009 – he called in a junior officer (a police captain), who had taken the report and said he didn’t remember what happened to it, and provided Hankel with “scraps of paper”.

Cilliers said: “So, some three years after the event you asked for the file and for three years didn’t realise where it had gone?”

The captain had said the file was under lock and key for four months and was then returned.

Hankel said: “I dispute that. Some files are classified Secret and Top Secret and would have been indexed back into my office.”

Hankel said there was nothing untoward in a junior officer booking out the file, but that there should have been a receipt. He was subsequently so upset that he nearly launched a counter-intelligence operation to return the missing document, and the Scorpions made him swear under oath that it was, in fact, missing.

But he remembered the file, because the British request dovetailed with the local SAPS drug effort, Operation Chase, which targeted Agliotti.

Agliotti said in a statement that he saw the report, but only “fleetingly”, and that he never had a copy. “Jackie presented me with a two-page document, which appeared to be a UK document, using words like ‘Her Majesty’.” But he had also said to the Scorpions that Selebi had showed him three such reports.

Nel insisted the witness identify the relevant document and respond accordingly, but Cilliers, in cross-examination, heatedly tested Hankel’s recall and credibility. Hankel’s meticulously-run office still cannot find the reference number for the missing file. And Hankel responded that internal actions in crime intelligence may have led to concealment of records around those dates, including a fax number that supposedly links to the office of the national commissioner (Selebi).

“That does happen in crime intelligence,” Hankel said.

It also happens in spooky nations.

Court protocol held, as another long “forensic” session took its toll. But Judge Meyer Joffe was not pleased because some witnesses were out the country. At the end of the day the trial was adjourned until Tuesday next week.