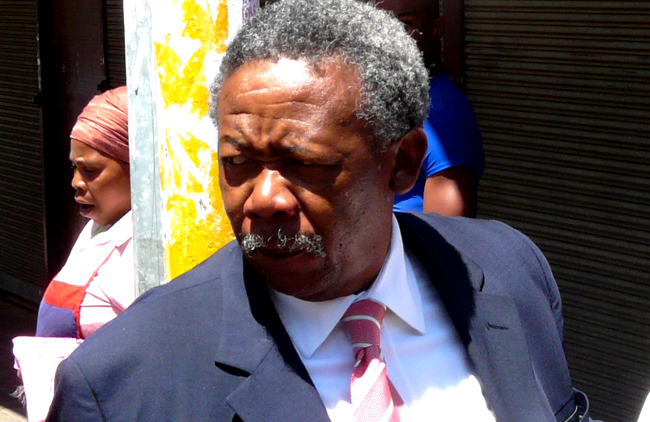 State witness Martin Flint told the court on Friday how Glenn Agliotti once drove a battered Nissan and shopped at Edgars. It wasn’t the sort of explosive testimony provided by his daughter Dianne Muller, but there were poignant moments.

The testimony of Martin Flint, father of Glenn Agliotti’s ex-fiancee Dianne Muller and financial overseer of the controversial Spring Lights account, did little to bolster the State’s attempt to prove former top cop Jackie Selebi guilty of corruption. But it did provide some insight into Agliotti’s past, and it showed – yet again – how the trial has affected the lives of the characters involved.

Flint, a chartered accountant and MBA graduate who retired from corporate life in 1998, opened his testimony in court 4B of the South Gauteng High Court this morning with the words: “I wish this nightmare to be over.” A white-haired and dapper man in a light caramel sports jacket, he explained in clipped consonants how he came to sell Spring Lights to JCI, the holding company of slain mining magnate Brett Kebble.

In late 2003, Agliotti had suggested to Flint that he invite JCI to become an empowerment shareholder in the events managements company that was then run by Muller. The deal never materialised, but during a meeting at the JCI offices, attended by Flint, Agliotti and JCI directors John Stratton and Hennie Buitendach, Kebble appeared briefly in the doorway and asked: “Do we have the company to handle the Wellesley-Wood DRD matter yet?” Stratton and Buitendach, who, according to Flint, seemed concerned about the request, immediately asked whether they might buy Spring Lights. The next day the transaction was concluded, at an amount of R350,000.

Flint told the court how monies came into the account from various sources, including former judge Willem Heath, Roger Kebble and Agliotti. Although Flint remained responsible for signing all cheques from Spring Lights, the instructions, he said, “always came from Agliotti.” On Agliotti’s orders, Flint would make out a cheque to a particular name or to cash.

For at least half of Flint’s testimony, which lasted just over an hour, State prosecutor Gerrie Nel talked the witness through a series of cash cheques listed in the court record. While Flint acknowledged each time that the signatures were his, he consistently replied that he did not know what happened to the cash. “I don’t know what happened to the money,” he repeated. “I just handed it to Agliotti.”

Flint also told Nel that in certain instances where the cheques had the words “cop” or “chief” written on them, he was not familiar with the reference. Further, where one cheque contained the initials “JS”, Flint said he thought at the time it referred to John Stratton.

Then, near the end of Flint’s evidence-in-chief, Nel asked: “What is your relationship with Mr Agliotti?”

“He was potentially my son-in-law,” Flint replied. “When I met him he drove an old battered Nissan, he bought clothes from Edgars and places like that. He was a different person to the one who is accused of these somewhat heinous crimes.”

Fifteen minutes later, during cross-examination, the court was afforded a glimpse into the emotional price the investigation and subsequent trial has exacted from the peripheral parties involved. Defence counsel Jaap Cilliers asked the witness whether he was “uncomfortable” about signing a certain affidavit, to which the reply was poignant.

“You live your life in a certain way and you have certain standards; and these standards get obliterated and you are not aware of that happening. I am incredibly uncomfortable and incredibly embarrassed by the entire matter. I’m referring to what my family has been through.”

The trial will resume on Monday.