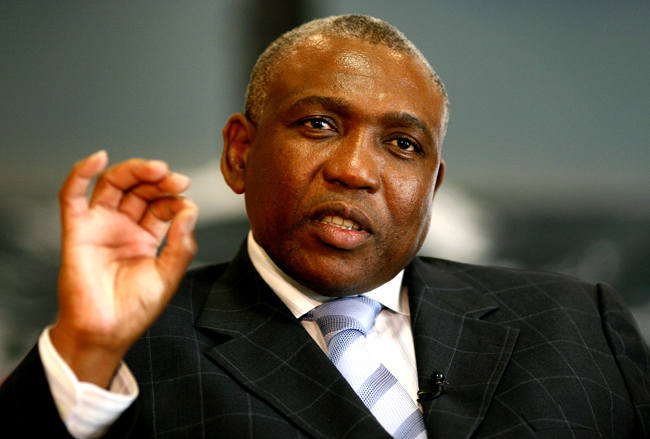 What do the Black Management Forum and the ANC Youth League know that we don't about what has been happening at Eskom? Not much, apparently.

If you thought Julius Malema (a BMF favourite) had an interesting take on the firing-or-resignation-or-maybe-both-or-maybe-neither of Eskom CEO Jacob Maroga, then you’ll dig what the Black Management Forum has to say about it.

For starters: “We will no longer watch when our people and our hopes for the management and control of our economy, the majority of the black middle class and specifically our executives are being made footballs, bastardised and manipulated by cynical forces.”

That isn’t from an off-the-cuff remark. That is a verbatim repeat of a written statement from the BMF. That is how the organisation started its media conference on the Maroga affair. And it was all downhill from there.

The people taking the questions were the forum’s MD, Gaba Tabane, and its acting president, Tembakazi Mnyaka (it’s real president, Jimmy Manyi is currently out of the country on something to do with his day job). According to them the entire Eskom dispute is all about racism. Racist whites, led by one B. Godsell, are revolting against a black executive, “who has given his time and his competence to helping the country, which has a fourteen year investment in him”.

We felt the need to point out that Godsell is the chairman, sure, but the other surnames on the board don’t exactly point to colonial ancestry. Cele, Modise, Nene, Dube and Makwane have a certain African ring to them. We could have brought up the Rwandan board member, but that may have been seen as xenophobic. And the Korean dude, well, he probably doesn’t signify in this case.

The answer to this question was long and involved, but comes down to the black members of the board being “subsumed”. While you’re trying to figure out exactly what that is supposed to mean, consider this: according to the BMF there are “black managers,” and then there are “Black Management Forum managers”. In a nutshell – at least to our ears, that translates into “if you’re not with us, you are a coconut”.

Sitting on the sidelines of all of this was Jerry Vilikazi, the head of Business Unity South Africa. He was at the podium, sharing it with the BMF. He didn’t speak, but during the question session said he doesn’t want to take sides. Which, in the above paradigm, makes him a coconut as well as less politically astute then we thought he was, if he doesn’t realise how his mere presence will be interpreted.

South Africa being a complex place, a phrase such as “anti-transformation”, is a neat way of calling somebody a racist without crossing the line by actually calling him a racist. “Is Bobby Godsell a racist?” we asked Mnyakazi. The answer was spectacular. “He’s exhibited signs of covert racism. We will not call him a racist, but there is a checklist we use, if you tick a number of yeses, say five out of ten, we’ve had our ticks against his views, his bully boy nature.”

Another journalist got some more goodies. “Are you aware of these two business plans, one from Maroga, one from the board?” (Referring to a new leak about the possible root cause for all this fuss.) “Oh yes we are, but we can’t tell you much about them”.

“Okay, so you accept that there are two plans. This isn’t just about race then, is it?”