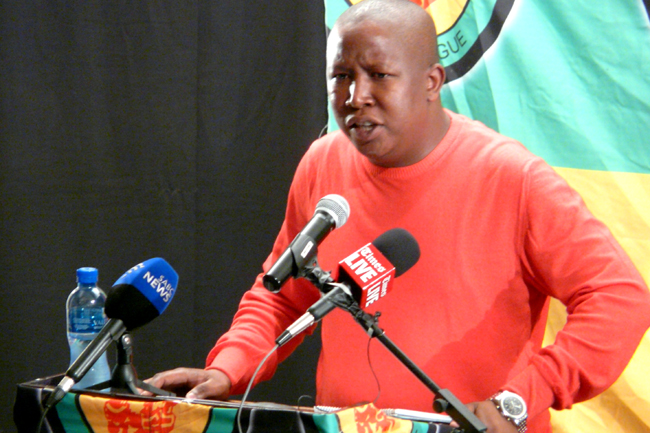 And the Black Management Forum is poised to join. Battle lines are clearly being drawn.

There’s a man with a gun over there.  His name is Julius Malema and it’s a scattergun he’s packing. His intervention into the Eskom saga was well-organised and effective. He phoned in to Talk Radio 702 at around 5:30pm, during the David O’Sullivan Show.  He couldn’t quite keep it together to keep his phone on.  During the SABC 3 7pm news, it became obvious why. He’d been doing the camera thing.

And what he had to say carried quite a punch. “Maroga didn’t sign a letter. Godsell cannot show us a letter because there is no letter”. At least Jacob Maroga is taking Malema’s calls (he’s certainly not taking the media’s). But it seems more likely that Maroga is the one dialling the right number here. Malema’s support is massive in this. It changes the equation considerably, and will really kick-start the speculation about who Godsell had to rush off to see.

Malema has also been slightly more measured in his tone on this one. For a start, he really seems to know something that Godsell may have missed. Whoever can prove Maroga’s resignation letter actually exists or not, will win this one. And Malema has obviously been told by Maroga himself that there is no letter.

The youth league leader likes to win his battles, but he’s tried this strategy before and it hasn’t worked. The Siyabonga Gama affair at Transnet didn’t end well for the league. They got fully behind him, and Gama’s got less chance of running that company than Godsell and Maroga have of kissing and making up … in public.

So he’s probably chosen this one more carefully.

Maroga’s also got other allies. The Black Management Forum has already weighed in on this and is likely to do so again.

This type of intervention follows the time-honoured story. It’s a white plot against a deserving black CEO who doesn’t sing and a dance like he should. It’s about black workers, who now want to run the show and be responsible for a budget heading well into the billions. Nothing but truth or not, it is an argument that should be considered, because this is how many people are going to feel. (Also, there ARE unreconstructed white managers who may well share a joke, a knowing smile, be a part of an unspoken conspiracy. We can’t ignore that.)

But Malema also forgets about blind reality. The board has 12 members. Maroga’s one, so he doesn’t get to vote.  But there are five other black people on the board.  They’re not going to be shrinking violets.  Sorry Julius, the race argument won’t wash, not this time.

But something’s gone wrong. Now Godsell will have to produce a letter that doesn’t seem to exist.  Which may mean there’s been a problem of interpretation. Things must have been said between Maroga and the board.  In anger, communication lines disappear, and things escalate. If this goes to court, it’s going to hinge on what was said. And in those cases, whoever wins in writing, wins (apparently Dali Mpofu is acting as an advocate again).

Maroga’s playing a good political game here. But he’s up against a couple of smart cookies.  Godsell is no idiot, and his reputation is now seriously on the line. Barbara Hogan has yet to intervene publicly. And Malema has made sure he’s got an escape route. He’ll “accept a decision, if it comes from the minister”. Or president, we presume.

By Stephen Grootes
Grootes is an Eyewitness News reporter