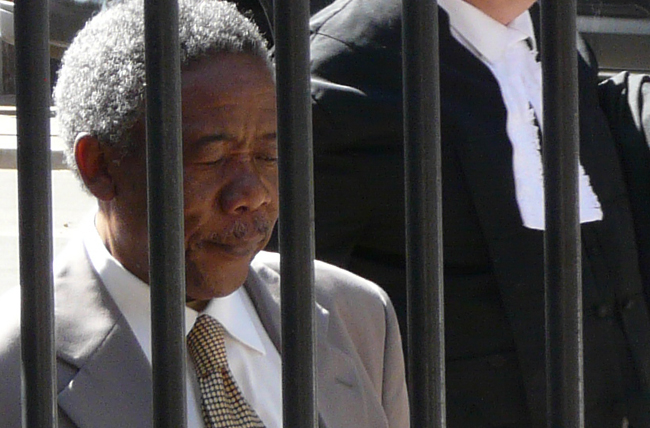 Glenn Agliotti’s ex-fiancee, Dianne Muller, gave testimony in the South Gauteng High Court that could bury Jackie Selebi. She also faced up to defence counsel Jaap Cilliers with more gumption than “The Landlord” ever did.

The relationship between Glenn Agliotti, the State’s star witness in the Selebi corruption trial, and current witness Dianne Muller began in tragedy. And tragedy is exactly where it might end for the former national police commissioner – unless, that is, Muller’s testimony in court on Wednesday is seriously called into question by defence counsel Jaap Cilliers.

A nervous Muller, who’d just been told by Judge Meyer Joffe that she had a “soft voice” and so should speak into the microphone, began her testimony by explaining to prosecutor Gerrie Nel how she met Agliotti. It was in 1993, she said, at a stable yard in Chartwell. Agliotti had been dating a woman named Bridget, who’d fallen off a horse and sustained brain damage, while Muller’s fiancé had recently died in a plane crash. The two shared their mutual grief, and by 1995 were a couple. “In June 2003,” said Muller, “I moved Agliotti out of my house.”

How it had come to this was not Nel’s primary concern, but from what was said during Muller’s evidence-in-chief the gallery was able to guess. Towards the end of her testimony, after Nel had extracted a series of statements and answers that could not have pleased the defence, Muller said: “Agliotti started to believe that he was larger than life. That he was bigger than anyone. That he could do anything. That the law could not touch him because he was friends with [Selebi]…He became very, very arrogant.”

Muller had earlier spoken about Agliotti’s almost daily presence at the offices of her events management company in Midrand, where he used a desk although he did “absolutely nothing” for the business. It was in these offices that Muller first learnt of the Spring Lights account, which was used by JCI – the holding company of slain mining magnate Brett Kebble – to “pay various people.” Agliotti would instruct Martin Flint, Muller’s father and the previous owner of Spring Lights, to cash cheques from the account. Flint would then return with the cash to the Midrand offices, where it would be placed in envelopes.

The markings on these envelopes, Muller said, were the initials “AD”, “CN”, “JS” and “CB”. Muller told Nel that these initials stood for Anthony Dormel, Clint Nassif, Jackie Selebi and Charles Bezuidenhout.

“How do you know that it referred to Jackie Selebi?” Nel asked.

“Glenn Agliotti told me so…and he would arrive at [the office].”

Nel then put a further question to the witness: “What would happen to the envelopes?”

“They would leave with Jackie Selebi.”

“I could see down the passage.”

At Nel’s prompting, Muller told the court a story. One morning, she said, Agliotti phoned her to say he was running late, and could she please pour Selebi a cup of coffee and chat to him. She did, and when Agliotti arrived he called her into an office, requesting that she count out R110,000 from a bundle of cash. When she put the cash into a counting machine the total came to R120,000, so she took R10,000 out and placed the rest in a white bank bag. She returned to the boardroom, where Selebi was waiting with Agliotti, and set the bag on the table. Agliotti said to Selebi, “Here you go, my china.” But Selebi appeared uncomfortable, Muller explained, and didn’t touch the bag – she therefore left the room. Twenty minutes later, from her office down the passage, she saw Selebi emerge with the bag.

“[Agliotti and I] had a discussion,” Muller told the court. “I said this is not the way for things to happen…the national police commissioner being paid by Glenn Agliotti. Glenn told me to mind my own business.”

Nel asked Muller why she didn’t report the incident.

“How do you report something to the police when the head of police is involved in it?”

Aside from the R110,000 payment, there were a series of smaller incidents Muller gave evidence about, including an overheard telephone conversation where Selebi asked Agliotti for a loan of R10,000 for his son’s birthday party. After the call ended, Muller testified, Agliotti turned to her and commented, “Lend my ass, I’ll never see that money again.”

There were also allusions to Fubu clothing bought by Agliotti for Selebi’s children, a Gucci handbag for Selebi’s wife, and clothes for Selebi himself. “I thought [Agliotti] spent an exorbitant amount on clothing for someone who had everything he could possibly want in his cupboard.”

“He said it wasn’t for him but for Jackie Selebi.”

Later, when Nel asked Muller to characterise the “friendship” between Selebi and Agliotti, she said: “I think it was a friendship of gain. I think they used each other for what they could gain from the relationship.”

In the event, the cross-examination of Muller, which began less than two hours into Wednesday’s proceedings, must have been a big disappointment for Selebi. Cilliers, who extracted many of the answers he wanted from a pliant Agliotti, seemed unable to move “The Landlord’s” ex-fiancee at all. Still, the irrepressible silk is sure to have another crack at it on Thursday, when cross-examination resumes.