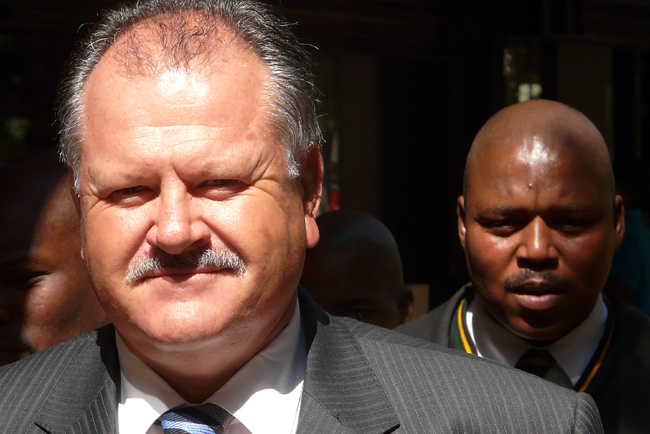 In the final day of testimony of State star witness Glenn Agliotti, prosecutor Gerrie Nel stressed several key instances of the alleged “generally corrupt relationship” between the drug kingpin and the former top cop. By all accounts, it was a welcome victory for the beleaguered prosecution.

In a trial that’s been beset by rancour and high emotion, the second day of State prosecutor Gerrie Nel’s re-examination of star witness Glenn Agliotti played out very much according to script. The chief protagonists in this latest act were Nel and defence counsel Jaap Cilliers, who so flustered his opponent with consistent objections that the prosecutor had to call an adjournment to “calm down”.

The first major issue of the day touched on Agliotti’s dealings with ex-Hyundai boss Billy Rautenbach. Nel produced Agliotti’s passport, currently being held in the custody of the State, to show that the convicted drug trafficker visited Rautenbach in the Congolese town of Lubumbashi twice – an initial visit in April 2005, and a follow-up in January 2006.

Both times, Agliotti confirmed, he arrived in town on an SA Airlink flight, met Rautenbach in the airport carpark, and flew back to South Africa on the same plane. The first visit, Agliotti said, was to establish what Rautenbach required of him – as testified in October, Agliotti acted as a middleman between Rautenbach and Selebi in a matter involving alleged improper conduct by former NPA boss Bulelani Ngcuka – and the second time was to receive payment.

“Now, you gave evidence,” said Nel. “What did you do with a portion of that money?”

“I gave it to the accused,” Agliotti replied.

“On how many occasions?”

“Did you tell him where it was from?”

Agliotti was in the process of explaining to Nel that on two of the three occasions he had indeed told Selebi, then South African national police commissioner, that the money was from Rautenbach, when Cilliers objected. If Agliotti met with Rautenbach for payment on 30 January 2006, said Cilliers, then the accused could only have gotten paid after that date. “That falls absolutely outside the ambit of the charge sheet,” the defence advocate complained.

Nel shot back that the charge sheet had been extended to November 2006, and that anyway he was trying to show that Agliotti had been paid on the first visit to Lubumbashi.

Cilliers objected at least three further times while Nel was pursuing this line of questioning, pointing out to the judge the difference between cross-examination and re-examination – the former defined by an advocate’s attempt to extract a “different” answer from a witness, and the latter defined by the need for clarification. In the current instance, said Cilliers, there was no need for clarification.

“What if [Agliotti] made a mistake with his dates?” Joffe asked.

After asking Agliotti to leave the courtroom so that the objection could be argued and counter-argued, Joffe provisionally allowed testimony to continue. Nel was attempting to show that another of Rautenbach’s motives in engaging Agliotti was his interest in persuading JCI, the holding company of slain mining magnate Brett Kebble, to invest in a Congolese mining operation – and that after Kebble was killed, in September 2005, Rautenbach had no further use for Agliotti.

When Agliotti inferred that this may have been the case, Nel backed off. The next major issue of the morning also had to do with the Kebble killing, but this time Agliotti was directly involved – on 28 September 2005, he testified, the day after Kebble was shot, he was on his way to the Johannesburg mortuary to identify the body when he received a call from Selebi, who “requested a sum of money.”

On cue, Cilliers objected. “This is totally new evidence,” he said. Nel attempted to show why the incident was admissible, and his argument appeared to convince the judge.

It was the third big issue of the morning, though, that was easily the most entertaining for the gallery. Nel questioned Agliotti about the first time he met Ngcuka, on an international flight, and read from an affidavit given by Agliotti regarding his words to the former Scorpions boss: “Here’s a Mont Blanc pen for you and your wife. Take it, fuck it. I’m like that, ask Jackie.”

Nel apologised sheepishly for swearing – they weren’t his words, he suggested – and then asked Agliotti: “What did you mean by that?”

Agliotti explained, as he had many times earlier in the trial, that he’s known as a generous person. “How would Jackie know?” asked Nel.

There were a number of technical issues that Nel focused on for the remainder of the day, mainly to do with venues for the handing over of envelopes, the alleged “targeting” of Agliotti and Selebi by the DSO, and the contents of the first DVD shown in court. Agliotti also told the court that he would plead “not guilty” to the murder of Brett Kebble, a case due to go to trial early next year, and one in which he stands accused.

And so the day brought to an end the explosive, if often contradictory, testimony of Glenn “The Landlord” Agliotti. Both sides, defence and prosecution, will justifiably feel that they’re still in the game. Of course, the weeks and months ahead promise to be just as arduous, beginning shortly with the testimony of Agliotti’s ex-fiancee Dianne Muller – who is purported to know a lot about how, when and why envelopes of cash were paid to the erstwhile top cop.