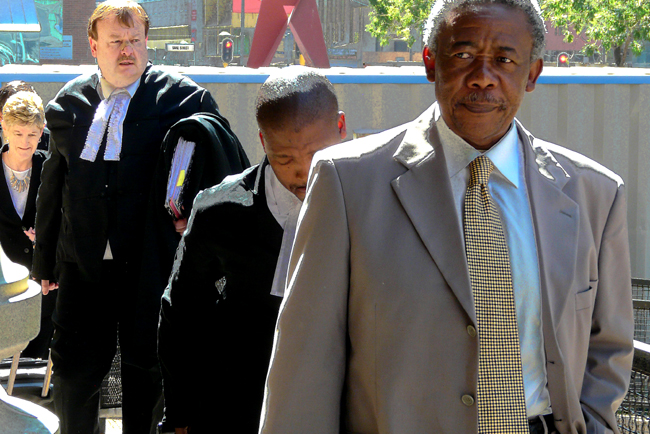 It was a gruelling, technical day in Court 4B at the South Gauteng High Court, as things swung back to normal after Judge Meyer Joffe last week dismissed the call for his recusal.

The defence claimed the state didn’t provide various documents or that it had taken too long, with Selebi’s senior counsel Jaap Cilliers returning straight to the notion that the accused was not getting a fair trial.

Cilliers then cross-examined Glenn Agliotti in an attempt to show he had his dates wrong in asserting he had given Selebi R200,000 sometime between 13 and 14 December 2004. Cilliers presented a pilot log-book indicating Selebi was in Upington at that time, but state prosecutor Gerrie Nel said it was only an official request for transport and didn’t show Selebi was on a particular flight. Judge Joffe agreed.

“The commissioner [Selebi] was not available 14 December as you [Agliotti] stated, to collect the R200,000,” Cilliers said, adding that while the logbook was not in evidence, he would later present the pilot as a witness.

Agliotti said he was trying to recall dates to the best of his ability and had no access to evidence such as cheque stubs.

“It is a generalisation of what we used to do,” Agliotti said, referring to Selebi arriving at Midrand event management company, Maverick Masupatsela, to take wads of cash presented to him in brown envelopes in the boardroom. The cash came from a bank account in the name of front company, Spring Lights, which was filled with monies from former mining magnate Brett Kebble.

“It obviously didn’t happen on those days, but the fact is I handed it [cash] over.”

Cilliers asked if the cash possibly had nothing to do with the Selebi, and rather was used for other purposes.

“It’s highly unlikely,” Agliotti said, adding he was always alone with Selebi when the cash was handed over. Cilliers didn’t entirely agree and implied the money went on various drug transactions.

Cilliers moved on to other amounts – R30,000 handed to Selebi for an Interpol dinner and R120,000, of which R20,000 seemed to be a “bonsela” (bonus) spontaneously thrown into the pot by Agliotti from cash he was carrying on his person. Agliotti said he nearly always carried around large sums of cash.

Cilliers moved on to Agliotti’s various conflicting statements – including a videotaped conversation with Mulangi Mphego, then acting boss of police crime intelligence, and representatives from the National Intelligence Agency – in which he said he never bribed the commissioner, and then said he did, and then recanted that. Agliotti said at least one statement among those was typed up for him to sign and which revolved around Agliotti telling various state agencies “what they want to hear”.

At this point Agliotti claimed not to understand the legal basis of bribery, or the concept of defeating the ends of justice in giving money to Selebi. Rather that he was Selebi’s friend (finish and klaar).

Cillers said Agliotti feared the Scorpions would cancel any deals with him and subsequently lied under oath in his various statements.

Agliotti insisted Selebi never gave him anything in return for the cash (except, a glance at documentation from Interpol and British law enforcement concerning Agliotti and former fugitive businessman Billy Rautenbach). But he admitted he was paid by mining magnate Brett Kebble to bring Selebi to dinner parties at Kebble’s house, and that he paid Selebi to attend to enhance his own status, while sorting out a problem with miner DRD Gold that saw Brett’s father Roger arrested for fraud (but later released).

The proceedings  were then disrupted by a squabble between state and defence over annexures accompanying affidavits that seemed to have differently numbered pages. Cilliers claimed not to have received annexure D. Prosecutor Gerrie Nel told the judge “if I have to prove it exists, I will prove it”.

Judge Joffe said: “It is unseemly that such a dispute arise between legal practitioners”, and warned both parties they would end up filing affidavits against each other, at which point the parties agreed to proceed on other issues.

Nel then said of Agliotti: “His conception of bribery and corruption is a recent fabrication”.

Joffe said he would disregard what was not put forward in evidence.

Agliotti said his friendship with Selebi began over a charity event that needed police support. Subsequently they attended each other’s birthday parties for years, spoke frequently on their cellphones and met “socially” at the Kebble’s house for dinner. But the relationship changed when the media reported on a drug deal involving Agliotti, causing Agliotti to buy a pay-as-you-go cellphone and subsequently contacting Selebi through his official driver.

Agliotti was arrested (and later struck a deal), and all communication between the two men stopped – no more Christmas greetings or general good wishes. Agliotti said the media targeted the friendship between him and Selebi. Nel asked whether any of the media reports were false. Algiotti said he was hurt when the media referred to him as the “landlord” of drug bosses. He denied being part of the reported drug deal. He said Selebi thought he was the landlord of a dwelling rented by one of the kingpins of the drug deal, Stephanos Paparas.

Cilliers said the Kebbles never knew Agliotti was paying Selebi. Agliotti responded saying (as stated in an intelligence report) that former Kebble associate, Jurgen Kogl, had said Selebi was paid by the Kebbles.

It was a day of claim and counter-claim, with Agliotti wanting to have his cake and eat it. He claimed paying Selebi large sums of cash, “because that’s what friends do”, but not bribing him. But it will be the judge who will be the judge of that.