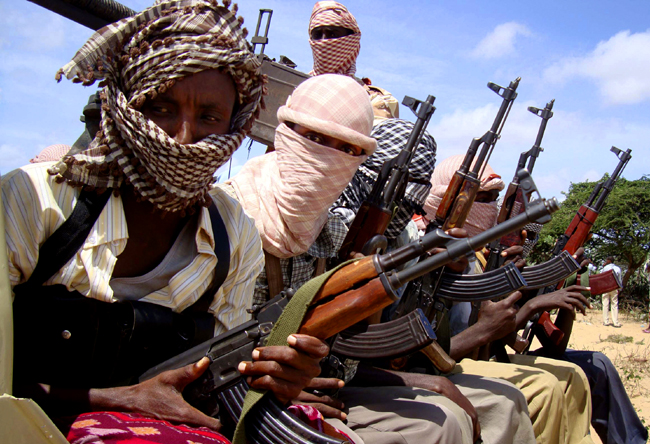 A rising tide of violence ultimately directed at the West, is raining body blows on African Union peacekeepers in Somalia.

There’s something really nasty brewing in Somalia, nastier than its very brutal recent history. It’s been nearly 20 years since the Americans waded ashore during Operation Restore Hope, to save a country wracked by warlords running amok. Five months later, with the world fixated on the image of a dead Marine being dragged through the streets of Mogadishu, they left with tails between their legs. Despite a continuing if faltering UN presence, no amount of “Blackhawk Down” movie-type firepower was going to resolve the anarchy that gripped the Horn of Africa country. Into that vacuum stepped al-Qaeda and its particular brand of Islamist jihad, and today a low-intensity, but deadly civil war has all the signs of taking off.

Somalia’s beleaguered moderate Islamic government has called for UN troops to assist a 5,000-strong African Union peacekeeping force. But as the last months have become ever bloodier, there has been little response from the world’s nations. Following a series of murderous assaults in the Somali capital, Mogadishu, the radical Islamist insurgency has just taken on a new and ominous twist. The main al-Shabaab rebel group has threatened to attack the Ugandan and Burundian capitals of Kampala and Bujumbura, and now the Ugandans say they will register all Somali nationals visiting their country. The bulk of the AU force in Mogadishu is made up of troops from these countries. Since September, the peacekeepers have suffered a deadly twin suicide truck bombing of their headquarters. Most recently, lethal fighting erupted in Mogadishu as Somali President Sharif Sheikh Ahmed returned from Yemen. Days earlier, AU troops were involved in a mortar and artillery battle that killed dozens of civilians after al-Shabaab fired on the president’s plane as he left for an AU meeting in Uganda.

Along with the new threat to countries in the Great Lakes region (home to the Rwandan genocide and ongoing lawlessness in the vast Democratic Republic of Congo), fear and paranoia had already gripped Uganda when its security services abducted the Somali defence minister during a private visit to Kampala. Some observers believe the moderate Somali government has been infiltrated by radical Islamist groups, as Mogadishu bombers have used stolen UN vehicles, making it hard for peacekeepers to tell friend from foe. Add to this a series of cross-border raids by Somalia’s neighbours Kenya and Ethiopia in recent weeks, and accusations and counter-accusations over the arming and training of militias by Eritrea and Djibouti, and a recipe for significant regional escalation has come into the mix.

After the 1991 collapse of the long-time socialist regime of dictator Mohamed Siad Barre, a group known as the Islamic Courts gradually took popular control of parts of Somalia, providing some policing, education and health care functions under Sharia law. By 2006 Islamic Courts had been defeated by a two-year Ethiopian invasion backed by Somalia’s transitional government, amid US suspicions that they were proxies for al-Qaeda; and resurgent warlords again took control.

The Americans and their allies, though, are not just worried about Somalia and the Horn of Africa region. Further north in Algeria, a deadly and long-running conflict between government and the quaintly named Salafist Group for Preaching and Combat has morphed into what’s called al-Qaeda’s North African wing. The wing’s members have been active in the deserts of Mauritania and Mali, and further afield. With estimates that Muslims make up between 30% and 50% of Africa’s population (mostly in Saharan countries and those directly to the south), and with places such as Ivory Coast increasingly split along such lines, the arc of potential conflict spreads from the “Bulge” in the west to the “Horn” in the east.

Indeed, “moderate” and semi-stable Islamic states such as Algeria and Egypt border fragile and volatile Arab and black African Islamic neighbours, such as Mauritania, Mali, Niger, Chad and Sudan. So, along with growing Western strategic interest in the region, there seems to be a positive new security role for the rehabilitated former “sponsor of terrorism”, Libya. And the distances between these countries are vast making it far more difficult to patrol and control them. The US has just given Mali millions of dollars in military aid to help fight militants. It also gets military assistance from Algeria and Libya. Libya has recently concluded some large oil and gas deals with multinationals including Shell and BP. Algeria pumps oil and gas for European consumption, while West Africa, including Nigeria, Mali and Niger, is an area of abundant natural riches, from oil and gas, to uranium, base and precious metals, timber, cocoa and coffee. The presence of al-Qaeda-linked groups in Somalia and Algeria is, therefore, cause for great concern.

It would only take a few bombings, such as the ones in 1998 on US embassies in Tanzania and Kenya, which killed hundreds, to completely change the picture. With a distinct escalation of violence in Somalia in recent months, and a parallel rise in regional tensions, the Horn of Africa region is now a third pillar of Islamist jihad. But nobody seems to being doing anything about it, except adding sticks to the flames one-by-one. In September US helicopters attacked a Somali convoy, killing a senior leader linked to al-Shabaab. The Americans made it clear they believed he was associated with al-Qaeda, and had been instrumental in the US embassy bombings in Kenya and Tanzania a decade earlier. Subsequent to his death, al-Shabaab launched a series of deadly attacks on Mogadishu, including on AU peacekeepers and the Somali president’s plane.

Yet, not everything’s been catastrophic in Somalia. The northern province of Somaliland, which unilaterally announced independence from Somalia in 1991, is a peaceful and relatively prosperous territory that even holds free and fair elections. Its experience proves that, with a bit of luck and help, Somalia could work. But no peace was ever brought by the barrel of a gun. Things have been adrift in the Horn of Africa for too long now, and the legacy of big powers’ missteps is set to continue for a long time.