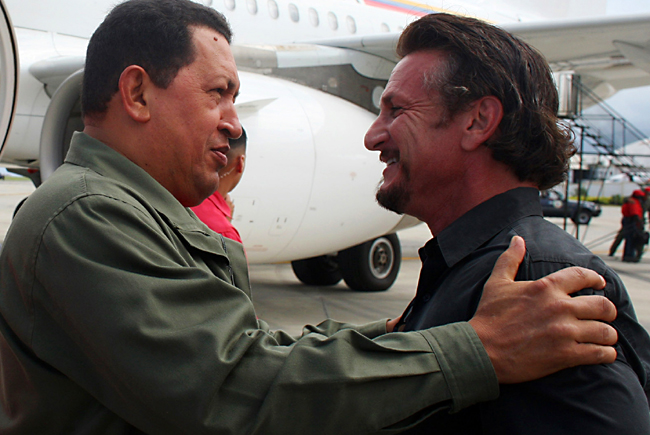 With a huge drop in oil prices, Venezuelan president Hugo Chavez’s grip on global geopolitics has loosened. Newsweek, as always, goes in for the kill – and the target this time is “Hugowood”, Chavez’s very own film studio.

It’s not for nothing that in both 2005 and 2006 Hugo Rafeal Chavez was named amongst Time magazine’s hundred most influential people. At the height of the Venezuelan president’s powers, when oil prices were at record highs and George W. Bush was making enemies faster than the US Marines could fight them, the world seemed ready for an anti-West revolutionary with the temerity to publicly call the US commander-in-chief an “asshole”. But while oil’s decline, a consequence of the global recession, hasn’t exactly toppled Chavez, it has almost certainly affected how he’s perceived – certain people want a weekly paycheck more than they want to burn effigies of US leaders, and besides, a man named Obama now occupies the White House.

Still, the latest example of the diminished respect with which the mainstream media now covers Chavez may be a bit much. The article, published in the November 2 issue of Newsweek and titled “Lights! Camera! Revolucion!” is a staff journalist’s first-person account of a visit to La Villa del Cine – “Cinemaville” – Chavez’s state-funded film studio on the outskirts of Caracas. It’s not what you would call a well-intentioned piece of reportage.

The writer, Mac Margolis, introduces us to the action by quickly outlining Chavez’s indebtedness to the 19th-century Latin American independence hero, Simon Bolivar. Margolis is stuck in Caracas’s traffic while he does this, and he notes that at the “petropopulist” price of 17 cents per gallon of gas, each of Venezuela’s 27-million people might be on the road that morning. He ends the paragraph with the following generous observation: “No one in Venezuela will ever make it to the Bolivarian revolution on time.”

In Margolis’s favour, La Ville del Cine, which aspires to challenge Hollywood’s movie-making (read: cultural) dominance, does seem a bit ridiculous. Very few of the country’s self-respecting directors appear to want to work there, and on the day the journalist visited all the edit suites were empty. More importantly, in its three years of operation the studio has cut only 13 movies, and the highest grossing, Libertador Morales, made just US$200,000 at the Venezuelan box office against Ice Age 2’s US$11-million.

That Venezuelans prefer Hollywood blockbusters to their own president’s socialist fare is no surprise. It’s no surprise, either, that many anti-Chavez Venezuelans refer to La Ville de Cine as “Hugowood,” an unsubtle dig at their fearless leader’s world famous hubris. What is surprising, though, is how vicious a “sane and measured” journal like Newsweek can become when the US’s stake in another country’s oil game gets inadvertently lowered.

In his sarcastic exegesis, not only does Margolis unequivocally place Chavez in the same camp as Hizbullah and Mahmoud Ahmadinejad, he also draws comparisons between the Latin American and Hitler. “Ever since Hitler turned to Leni Riefenstahl,” he cleverly tells us, “dictators have dreamed of harnessing the epic force of the big screen for their political script.”

This is the same Newsweek, mind you, that just a few months ago placed Jacob Zuma in the company of global undesirables, arguing amongst other things that, “Today, [South Africa] conducts a foreign policy closer to that of a rogue state.”