Tales of the African Communist and physical violence ag... 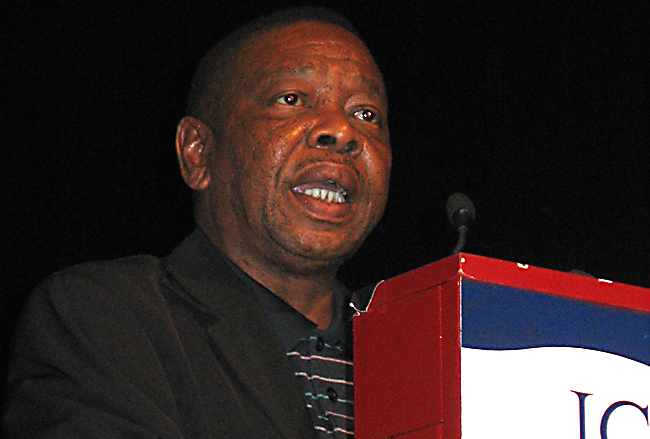 Mbeki-ites and the Zuma crowd meet to discuss 50 years of a magazine that'll never make it onto the easy-reading stand.

Joel Netshitenze, Sydney Mufamadi, Ronnie Kasrils, Charles Nqakula and Essop Pahad. Blade Nzimande and Zwelinzima Vavi. Yesterday’s men and today’s political beasts, all in one room, all happy, all laughing. The 50th anniversary of the African Communist magazine on Monday brought them all together in one place, and what a meeting it was.

It was supposed to start with President Jacob Zuma, but, of course, he had urgent state business. As keynote speaker Blade Nzimande flew the flag for the left. He railed against corruption, against business interests and the 1996 class project (SA Communist Party code for Gear and privatisation). But he did it politely, gently pointing out “Comrade Joel” as he did so, with a wink and a smile. He also had time to bang on about the mainstream media (Nzimande has always had a problem with the “mainstream” media, but he has never turned down an interview request).

He also gave a very pointed critique of black economic empowerment. South African communists have always regarded apartheid as “colonialism of a special type” (it’s understood the phrase may actually be trademarked to a youthful T. Mbeki). Nzimande claimed that BEE was actually very similar to this. In alliance language that’s pretty strong stuff. Missing from his speech was any mention of expensive cars.

Zwelinzima Vavi made up for that. He made sure that everyone knew Cosatu and the SACP had accepted that a mistake had been made around Nzimande’s cars. And that the business interests of politicians were the single biggest threat to the “National Democratic Revolution”.

Then it was the turn of yesterday’s men. To a man (they were all men), they had served with Thabo Mbeki for years. Ronnie Kasrils was actually quite entertaining, talking about the history of the African Communist, how it was printed in London, and regaling his audience with tales of how it was smuggled into SA (it involved a zoological book and a big cover). Kasrils used a piece published in the AC in 1991 by Rusty Bernstein warning about how leaders can get “trapped in protocol and security”. It was elegantly done.

Essop Pahad got the biggest laugh of the day. He was talking about how strong he and his colleagues felt about the Soviet Union, how they “would have been prepared to die for it”. He was recalcitrant about any wrong-doing by one of the most evil empires in history. He brushed over what happened in Poland and other parts of Eastern Europe, “because, my friends, we must never forget it was the Soviet Union that saved us from fascism”. Surely only Essop Pahad can still believe that. He went on about a group of Hungarian “proto-fascists” who he came across. “And we physically confronted them, we beat them up.”

Bascially, Pahad seemed to confirm what many of us have always known. He is not afraid to use physical strength to get his way.

Jeremy Cronin, the most honest man in South African politics, changed the tone, with his usual pleasant demeanour, and spoke about the return of the journal to its native land in 1990s.

It was an astonishing gathering. A group of people who grew up together, fought together, shared rooms in Angola and Mozambique, survived bombs together and ran a country together. It was a pleasure to be a part of their memories. Despite their ideology, they’ve achieved astonishing things.  Over the last few years it seems that, sadly, the lust for power and disputes over policy have taken over. Along with their support for differing political leaders, of course.

The African Communist is a venerable magazine, for insiders – for communists. However, it does have an impressive alumni. Their day is past now, but for them those days will live on, in their memories, as they shuffle off the political scene.

Stephen Grootes is an EWN reporter