Business angles for a slice of space cake

Business angles for a slice of space cake 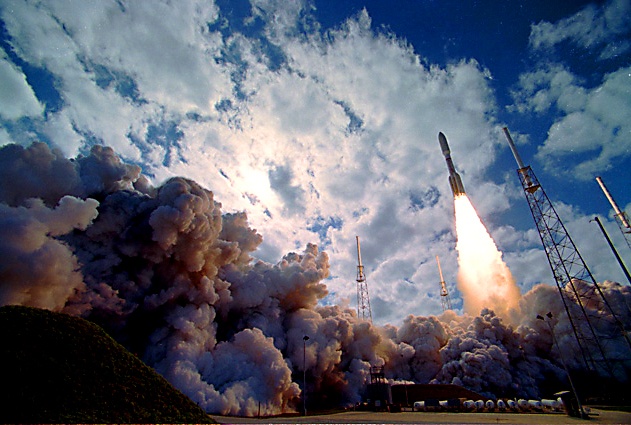 Here's the thing, how do you get manned spacecraft out of low-earth orbit, back to the Moon and maybe on to Mars?

That is a very different proposition to just ferrying stuff up to the space station and back by using the shuttle as a hi-tech donkey. That is one of the questions that the Augustine panel has posed to Nasa and President Obama, as it seeks to find a viable commercial role for space flight.

The panel – named for its chairman Norm Augustine, a former CEO of aerospace manufacturer Lockheed Martin – might add: what does space exploration do for people? And in strictly business terms, at what sustainable cost to benefit ratio? These are tricky questions, devised to find cheaper, faster (and presumably more reliable and cost-effective) successors to the shuttle by involving the private sector. Up to now, Nasa has remained a brains trust of engineering talent, looking for the next big thing after the moon landings, interstellar Pioneer and Voyager missions, and the Mars rovers.

What we have to show for these efforts are mostly little details. How to hygienically evacuate human waste while in orbit for periods of six months and more. The maintenance of the physical and mental health of crews for long-duration space flight, at least in the relatively sheltered environment of  low-earth orbit. We also, primarily thanks to the International Space Station (ISS), have a framework for technical and logistical cooperation between nations.

Blue-sky science has obviously been given a boost, although any new medicines, materials and benefits for food propagation have seemingly been ignored by successive Nobel committees, and are not immediately apparent to the public. Now the Augustine panel is seeking to change all that by arguing that if crew transport services to the ISS were passed to the private sector, it would free Nasa to work on more difficult – and more exciting –objectives.

Dreamers, entrepreneurs and pace-setters, such as Richard Branson and his Virgin Galactic space tourism company, would surely welcome that. They know that the independent development of space tourism is never going to provide enough money to finance the technological wonders that will take humans far into the solar system. Like the current Russian space programme, it will always be stuck in second gear. And Branson’s open-ended and seriously fledgling idea has real safety issues.

For the critics who say Nasa is yesterday’s behemoth, they forget all the wondrous journeys over many decades that continue to send back data on the sun, the planets, their moons, the stars and the background universe. Nasa and the Russians visited the moon, Mars, Venus, Jupiter, Saturn, Uranus, Neptune and beyond into interstellar space. Mercury and the Sun have been probed in fly-pasts, and the Russians, Europeans and Japanese have bypassed Halley’s Comet. Hardly a day goes by now when someone isn’t smashing into Mars, the moon or an asteroid, looking for water and cosmic splash.

But now, the Augustine panel believes, the time has come for private enterprise to get a foot in the door of actual service delivery in low-earth orbit, carrying humans and cargo to the ISS. It’s not a bad idea on the face of it, but the next question is where the buck stops. Space is a tightly controlled frontier, and no space-faring government is about to give that up. With visions of satellite defence shields and the highly lucrative data market, expect control to long be in the hands of “the people”. Not forever, though.

Currently Nasa is developing a new generation of moon-landing craft that will also do the work of the shuttle; the Augustine panel says this programme no longer matches the timeline for which it is needed and will suffer budgets overruns. To this end the panel is now positing the heretical in asking Nasa to oversee development of a simpler craft that can be launched on an existing, but upgraded, rocket, that will cost the American taxpayer much less and be in service by 2015. It says it has given President Barak Obama “options or alternatives” and not “recommendations”, but with business straining at the leash for a bite of commercial space ventures the lobbyists will soon be in full flight in Washington.

The panel is evangelising what it calls a flexible path, which will enable Nasa to put people on Mars. A report from the BBC says that under this scenario, Nasa will use technologies as and when they became available, to visit progressively more interesting and more challenging places. And while it seems that Nasa will remain the visionary entity, Augustine presents its recommendations as a new way of doing business. Nasa will be the anchor client that incentivises space travel, because of the return on investment expected by a commercial investor. Indeed, the panel sees an important role for the space agency as the controller of quality assurance and mission sustainability, with some taxpayer risk in mission development, while commercial entities would profit by selling crew transport services to other nations and even space tourists. It sounds like a commercialised Bretton Woods of space travel, with the market set to become top dog. The BBC says the report will be used by Obama and his chief scientist John Holdren, and new Nasa Administrator Charles Bolden, to put the agency on a sustainable future course. It remains to be seen whether Obama will be beholden to embolden his chief scientist and new Nasa administrator in favour of a distinctly commercial business model.