US clings to nukes, but wants cold war thinking rethoug...

US clings to nukes, but wants cold war thinking rethought 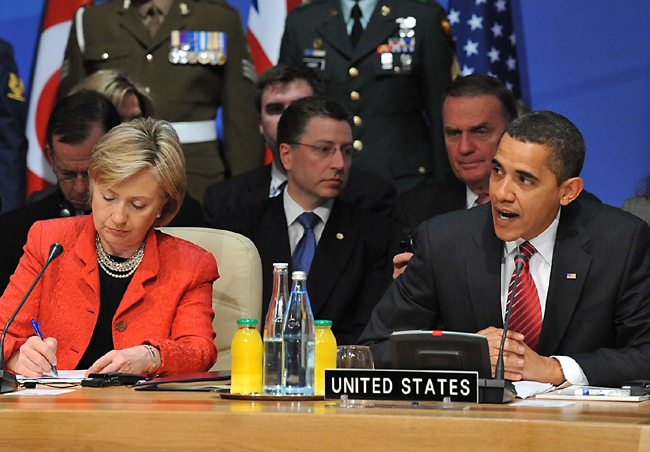 Hillary Clinton is talking the talk, but the USA isn't going to disarm overnight or let partners feel they don't have a watchful big brother any longer.

US Secretary of State Hillary on Wednesday reiterated American support for its allies and partners, saying they “should know that we have their backs,” a not-too-veiled reference to concerns in Poland and the Czech Republic about the Obama administration’s recent decision cancelling the anti-missile program that was supposed to have been based there.

Clinton was speaking at a meeting of the US Institute of Peace, a a government supported, independently managed think tank in Washington.

The missile program reversal was apparently part of an effort to bring Russia on board to press Iran on its uranium enrichment, the critical precursor to weapons development.

Clinton’s speech was intended to underscore US President Barack Obama’s goal of reducing the role of nuclear weapons in the United States’ defence posture – non-proliferation and disarmament efforts were, after all, a key part of the justification for his being awarded this year’s Nobel Peace Prize. Clinton’s speech obviously did not offer unilateral disarmament, however, as she stressed the US will continue to hold an effective, safe and secure nuclear strategic force.

A key point in Clinton’s speech focused on Obama’s goal of reinvigorating the global nuclear nonproliferation regime, eliminating potential sources of nuclear terrorism and moving towards a vision of a world without nuclear weapons. She stressed that the right path toward reducing the threat from nuclear weapons is to engage allies and partners around the world in an active diplomatic effort, just as she highlighted ongoing steps by the US and Russia to reduce their nuclear arsenals. As secretary of state, Clinton is clearly taking the lead in the Obama administration in its efforts to gain Senate approval of the Comprehensive Nuclear Test Ban Treaty – as well as efforts to secure an arms reduction agreement with Russia.

She also discussed the Nuclear Posture Review, and even before she spoke, a senior official underscored her bottom line message, saying Clinton would “insist we review tough questions and end Cold War thinking.” Good point, especially since the cold war has been over for nearly a generation.

Clinton has just returned from a very visible world tour that included stops in Moscow, Zurich, Belfast, and Dublin. While in Moscow, she spoke forcefully about the importance of building an increasingly open society, and in Zurich she took part in an historic agreement between Armenia and Turkey. Clinton’s road trip was part of an effort to reassert the State Department’s and Clinton’s primacy in foreign affairs and this speech represents yet another element in re-establishing that primacy.