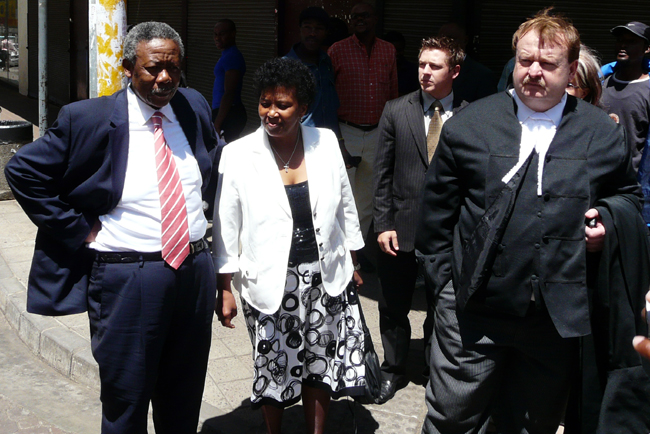 Judge Meyer Joffe has apparently received at least one death threat and may now have his own protection detail. Which is just about par for the course in this mess of a trial.

The trial of former police chief Jackie Selebi hasn’t been without its bombshells. There was the “secretly recorded” video tape that emerged on Tuesday, and the request by the defence that the presiding judge recuse himself.

The biggest bombshell of the week, however, is that Judge Meyer Joffe has been threatened.

According to a source linked to the former Scorpions and the National Prosecuting Authority, Joffe received death threats last week, and may now be under NPA protection. The threats may stem from Joffe allowing into evidence a videotape of Agliotti being interviewed by acting police crime intelligence head Mulangi Mphego and senior National Intelligence Agency bosses. In that tape, Agliotti made reference to a political conpsiracy against Selebi by the Scorpions and NPA when they were respectively run by Leonard McCarthy and Bulelani Ncguka, and mentioned parties who he said were responsible for the “murder” of former mining magnate Brett Kebble. Now that defence counsel Jaap Cilliers has asked Joffe to step down, the trial has been put on hold until later next week, when the judge wants defence and state motions concerning his recusal to have been fully submitted. In the meanwhile both parties will be busy looking for and at other pieces of evidence. Such as the new video tape leaked to City Press, of which neither the prosecution nor the defence apparently have a copy.

If Joffe does not recuse himself and the trial goes ahead, things will only get murkier. The issue is no longer so much whether Selebi took money from Agliotti, Kebble and former fugitive Billy Rautenbach. It has become about high-level corruption, abuse of office and personal and political allegiance. Part of Selebi’s defence strategy, for example, rests on accusing Ncguka of having a personal interest in mining concessions in the Democratic Republic of Congo at the time his wife was minister of mineral affairs, and that the wife of former NPA boss Vusi Pikoli was given free shares in a Kebble company.

Last week, in ruling the first of three videotapes as preliminarily admissible, meaning that it can be dealt with again in argument at a later date, the judge stated that the fact that Mphego was involved in obtaining evidence from Agiotti is “what befouls this case”, and that the court was either being asked to sanction or accept this fact. The leaking of evidence apears to play into the hands of the accused, as it brands Agliotti an unreliable witness. But whether Agliotti’s game of providing conflicting statements to prosecutors one day and various intelligence agencies the next, will deter the judge from finding harshly on the already available evidence against Selebi, is yet to be seen.

Cilliers’ gambit for the judge’s recusal appears to be based on flimsy grounds. What is clear at the trial is that the war between the Scorpions, NPA, police and the National Intelligence Agency is not yet over.