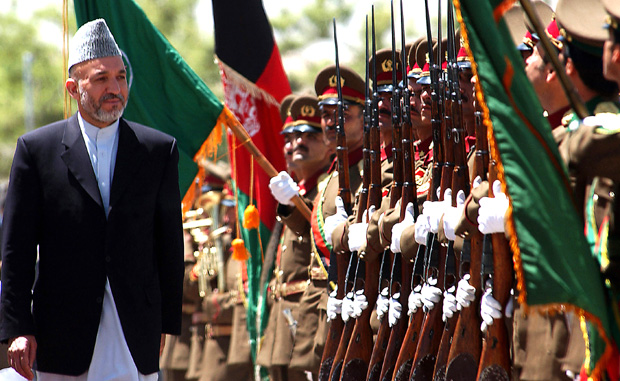 Afghanistan's election commission ordered a Nov. 7 runoff in the disputed presidential poll. After investigators removed hundreds of thousands of fraudulent votes for current president Hamid Karzai, a UN panel had said the fraud was so pervasive that nearly a quarter of all votes were thrown out - and Karzai had not won the Aug. 20 election.

Nearly a million of Karzai’s three million+ votes were discarded. The adjusted totals thus dropped Karzai’s tally to 49.7% of the vote – higher than some independent calculations, but below 50%. And so, after continuing international pressure, including phone calls from people like UK PM Gordon Brown, Karzai agreed to a second round vote between himself and challenger Abdullah Abdullah.

This announcement came following political uncertainty after the first vote – and in a climate of growing Taliban strength versus the Karzai government, US and NATO forces. Obama administration officials had used Obama’s pending strategy review on Afghanistan to nudge Karzai to move on a second round. Obama’s chief of staff, Rahm Emanuel, for example, said in Sunday television interviews the administration must first ensure it has a “credible” partner in the Afghan government before a decision to send more troops.

After a two-hour meeting with senator John Kerry and the US ambassador,  Karzai agreed to accept the findings, When Karzai made his announcement, standing along side him were John Kerry and Kai Eide, the head of the UN in Afghanistan – indications of the international pressure Karzai had been receiving. (Kerry is a leading Democrat and the chairman of the Senate’s Foreign Relations Committee.)

In his own announcement, Karzai said, “I hope that the international community and the Afghan government and all others concerned will take every possible measure to provide security to the people so that when they vote that vote is not called a fraud.”

In Washington, Barack Obama welcomed Karzai’s agreement to run in a second election against Abdullah Abdullah, saying this decision has “established an important precedent for Afghanistan’s new democracy.”

The agreement on a new vote does not end fighting, however. In the newest engagement, Afghan and international forces killed a half a dozen militants in a raid on compounds used by a Taliban commander.

The agreement for a runoff is just the first step in negotiations to iron out differences between Karzai and Abdullah. The US seems interested in a form of power-sharing, but there various possible scenarios, including a loya jirga – a traditional Afghan combination of negotiation and consensus. Both Karzai and Abdullah have said privately they are open to the idea of a coalition, but they have different interpretations of what that means.