At 70, Ted Turner feels slightly sorry for himself

At 70, Ted Turner feels slightly sorry for himself 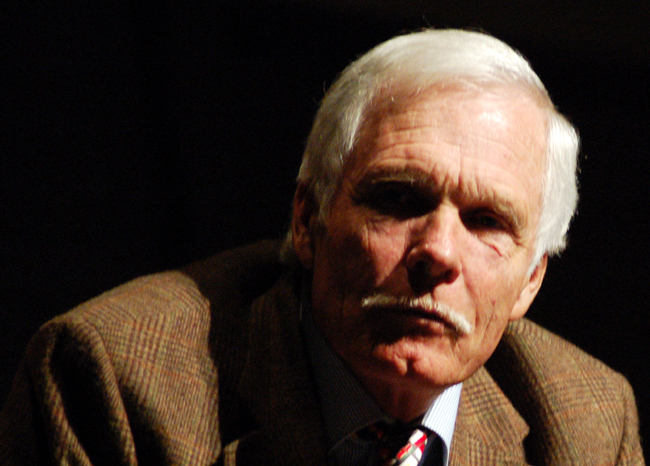 As the autumn of his life approaches, the aging media visionary feels he has not done enough.

Ted Turner rocketed to global awareness with the success of the network he dreamt up, CNN. As beneficial as the Gulf War I was for CNN, so it was for Turner, who was suddenly recognised as a media visionary. Turner launched CNN in 1980, and the early years were conspicuous by its rustic appeal (read: shoddiness; the often quoted nickname for the fledgling station was Chicken Noodle Network). But he had something in there, something he was ridiculed for and laughed at for many years – the idea that a TV channel can succeed doing nothing other than serving news for 24 hours a day, 365 days a year. The late eighties finally brought recognition that he may be right, and when the US and allies invaded Iraq in January 1991, CNN was ready for planetary fame. To be fair to Turner and CNN, they didn’t rest on the laurels and not only coverage, but also the quality of it, kept improving, with today’s network boasting one of the highest profiles and brand recognition globally.

Strangely enough, that turned out to be his last really successful enterprise. In 1996, he sold CNN to TimeWarner, making him the biggest single shareholder in the media giant. When in 2000 AOL bought TimeWarner, Turner was again the biggest shareholder. It wasn’t exactly a blessing, however. By then deputy chairman of AOL/TimeWarner, Turner was hurt more than anyone else when the collapse came, losing all in all $7 billion in value. He finally resigned and sold his shares in the company in 2006, a broken-hearted tycoon that saw a lifetime of work sacrificed to someone else’s ego and blurry vision (that would be Jerry Levine, then CEO of TimeWarner and later of AOL/TimeWarner).

When Turner once and for all gets ready for the final sign-off, he will probably see 1996 as the fork in the road where he took the wrong turn: by selling CNN with the rest of his TV properties, TBS, TNT and Cartoon Network he made lots of money, but he lost what he also held dearly: his operational control over the network he created. The 2000 AOL merger pushed him even further away from decision-making into statesmanship, a role then still-young Turner didn’t welcome.

He also needed new avenues to dispense with his ample energy: he pledged the UN $1 billion, a promise he is about to fully honour despite almost losing his shirt on the AOL deal; through his Turner Enterprises he is the biggest individual land owner in the US (he owns two million hectares over 12 states). Though he didn’t buy it just to enjoy seeing the sun rise and set over his land, but rather to provide roaming ground for his herd of more than 50,000 American bison. His restaurant chain, Ted’s Montana Grill, was envisaged as a pioneer in the commercial viability of bison meat, a move Turner hopes will make bison farming as profitable as cattle and bring the species back from the brink of extinction.

But besides being a globally recognisable figure, and being consulted on issues as wide ranging as nuclear disarmament, environment and women’s rights, his biggest wish remains to one day run CNN again, for the benefits of “serious journalism”. As with many big guns before him it is not about the money.

Read more: Bloomberg interview with Ted Turner, and some of the reactions on Atlantic Wire