Selebi trial: What does Agliotti fear more than prison?

Selebi trial: What does Agliotti fear more than prison? 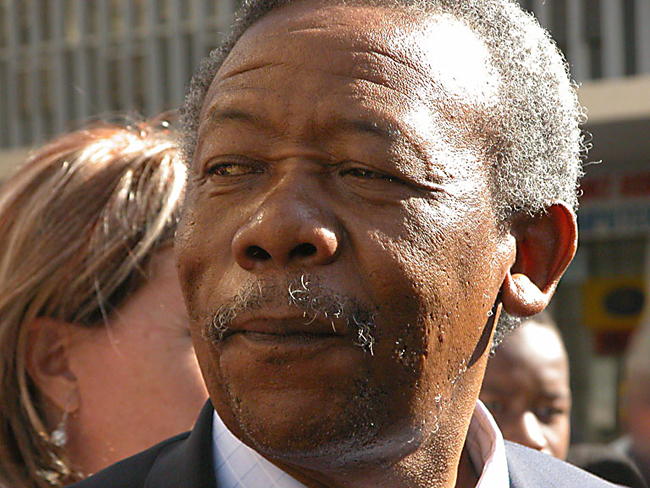 The testimony of the State’s key witness in the Selebi trial, Glenn Agliotti, is becoming more and more compromised. Either the drug boss is oblivious to the mess he’s in, or there’s something the public – and the court – doesn’t know.

The Selebi trial continued in court 4B of the South Gauteng High Court on Wednesday with defence counsel Jaap Cilliers going hard at the State’s chief witness, Glenn Agliotti. Not about to allow the convicted drug peddler time to settle in, Cilliers opened with a key question – why did Agliotti not acknowledge during evidence-in-chief, led last week by State prosecutor Gerrie Nel, that he had never bribed Selebi?

“I was never asked,” said Agliotti, in the first move of a cat-and-mouse game that would last all morning.

As he has done for much of the cross-examination, Cilliers was clearly attempting to prove the unreliability of Agliotti as a witness. He referred initially to two affidavits signed by Agliotti, one dated December 2006 – when Agliotti was in custody – and one dated November 2007. “I couldn’t find any statement [in either affidavit] that you never bribed the commissioner,” Cilliers averred.

When Agliotti said he couldn’t remember the contents of the affidavits, Cilliers provided the documentation and asked that the witness read through the relevant parts. After a few minutes, Agliotti looked up and said, “It doesn’t appear.”

“That I stated I didn’t bribe the accused,” said Agliotti.

“Does it state you did bribe the accused?” asked the judge.

“No, m’lord,” said Agliotti, before going on to stress that he had been consistent in his testimony that he’d never bribed Selebi. But consistency, or the lack thereof, had long since become the defence team’s major chord, and they were now playing the notes with gusto. A large part of the morning session was given over to the amusing, if somewhat tragic, discrepancies in two affidavits Agliotti had signed within a six-day period, the first on January 4 2008 and the second on January 10. The earlier affidavit stated, “I maintained to the [Directorate of Special Operations] all along that I’ve never bribed Selebi,” while the latter contained the statement, “I never maintained to the DSO that I’ve never bribed Selebi.”

The gallery, barely suppressing their laughter, watched rapt as Cilliers went for the kill. “Will I be correct if I state that the NPA/DSO were furious when they saw that [first] statement?” he asked, a question he would repeat several times. The defence counsel’s suggestion was that in the second statement Agliotti was telling the DSO what they wanted to hear, thereby protecting himself. Agliotti, however, was not giving in so easily. Initially arguing that the discrepancy may have been due to a typing error, he later suggested that since he was not “au fait with the law” he needed his advocate to explain the exact legal meaning of “bribery” to him.

Judge Joffe interjected again, asking whether Agliotti had the January 4 affidavit in front of him when making the statement of January 10. Agliotti replied that he couldn’t remember, but the judge pointed out that he must have had the former statement with him, since he’d referred to a detail – a stamp from the Brixton police station – that he could not have known about had it not been for the January 4 affidavit. Calmly attempting to extricate himself from the mess, Agliotti then emphasised to the judge that the reason for the disparity was his advocate’s explanation of the legal meaning of “bribery”.

When the exchange between the judge and Agliotti had ended, Cilliers turned back to the witness with a much-raised voice. “As you sit here in court, you are still lying!” Cilliers put it to Agliotti that the January 10 affidavit was a “concocted version” to safeguard his indemnity deal with the State.

“Why did you lie to his lordship?” asked Cilliers.

“Does it come naturally?”

Aside from Cilliers’s attempt to submit an off-the-record video of a meeting between Agliotti, the SA police and National Intelligence Agency representatives as evidence – a matter that will be dealt with on Thursday – the rest of the day proceeded pretty much along the same lines. Cilliers would attempt to prove that Agliotti had contradicted himself in various statements, and having satisfied himself that he’d done so, he would call Agliotti a liar.

It’s not good form for the media to give opinion on a case that’s before the courts, but in this instance it’s incredibly hard not to – so let’s just say, for the sake of diplomacy, that Cilliers is making a damn fine showing of himself. Agliotti will only be let off the hook for corruption, racketeering, money laundering and defeating the ends of justice if he testifies “frankly and honestly” in this trial. Given all that’s happened thus far, even Agliotti’s closest bookie friends might be forced to stretch the odds on Judge Joffe finding for that. Surely Agliotti knows that his freedom’s at stake? Surely he knows that there’s a likelihood his testimony will be thrown out?

Which leads to the real question: what does Agliotti fear more than prison?