Selebi trial: a litany of lies, and more unanswered que...

Selebi trial: a litany of lies, and more unanswered questions 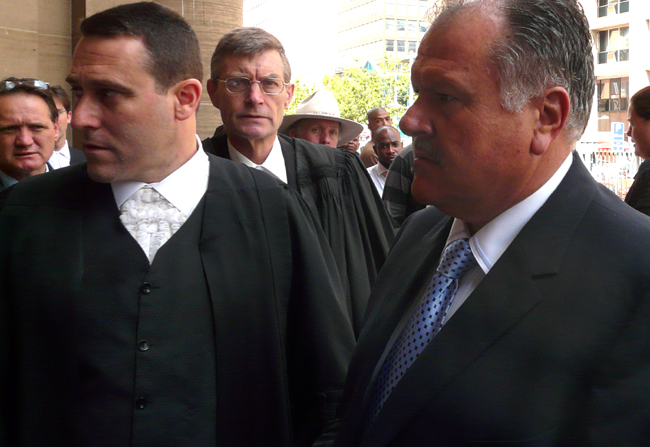 Glenn Agliotti is a liar, that much we have established. But did he lie at first, or later, or is he lying now? And just how much of Brett Kebble's money did he spend, on Jackie Selebi or otherwise? As the case against the former police chief continues, things are just getting murkier.

Three things are clear now: Glenn Agliotti gave Jackie Selebi substantial sums of money, and was Brett Kebble’s Mr Fixit, to the degree that he may have had an innocent man falsely imprisoned. He also pitted the National Intelligence Agency against the Scorpions by telling each party what they wanted to hear, even if this was not always for his own benefit. But if the old saying “the truth will out” applies, Tuesday’s session at the South Gauteng High Court was not the day. Instead it was time for prevarication and lies, with Agliotti admitting under oath that he doesn’t tell the truth and nothing but the truth, with implications for the arms deal, Thabo Mbeki, Jacob Zuma and even the Democratic Alliance.

Jaap Cilliers, defence counsel for Jackie Selebi, spent the day using conflicting testimony to show that Agliotti is an unreliable witness, primed by the Scorpions and National Prosecuting Authority to bring down the former police chief. The protagonists would have the court believe it’s all about foreign intelligence and national sovereignty in a murky world of graft that pervades the highest levels of South African governance.

In tough cross-examination, Cilliers had Agliotti agreeing that his “approach was to give the NIA what they wanted to hear – with facts”, and that he was prepared to lie to secure deals. This included lying to Kebble about former Kebble security boss Clinton Nassif’s underhand connections with SARS, the courts and the SA Police Service to secure him a job from which Agliotti benefited financially. Cilliers said it was known that Agliotti lied for financial gain or to prevent prosecution.

Agliotti replied: “The are certain instances where I lie, whether I benefit or not. I think we all do.”

“Speak for yourself,” Cilliers said

“Yes, I do, I lie from time to time,” Agliotti replied.Cilliers painted an unhealthy character portrait of Agliotti, with reference to another former Brett Kebble security boss, Paul Stemmet, who he said was proficient at throwing hand grenades at people Kebble did not like, and planting drugs on a man who is likely innocent and still sitting in jail somewhere, on Agliotti’s command. This was quite different to earlier cross-examination, where Cilliers had Agliotti agreeing that he was kind-hearted, socially responsive and probably a saint.

Agliotti’s claim that he never bribed the former head of both local police and Interpol, despite paying over large sums of money to him, barely caused a ripple in the packed court. The court also heard of various Kebble employees trying to garner tenders for providing cars and information technology to the SAPS using Selebi’s influence, and offering Selebi’s family holidays in places such as Mauritius. And while assent and denial came in equal measure, the testimony pointed to a deeply flawed relationship between Selebi and his erstwhile “friend, finish and klaar”, in courting Brett Kebble and his various needs.

The macho game between intelligence services, the police, the NPA and Scorpions, was put on the front burner again as the court heard that police had refused to hand over documents crucial to the prosecution. Judge Meyer Joffe and chief prosecutor Gerrie Nel agree that a running record is now required for a case of such magnitude, but Nel, in working for government, claims to be under tight budgetary constraint, notwithstanding the filibustering of security agencies.

Much of the testimony has seen the light before. And although Agliotti only goes to court next year to face charges over the killing of Brett Kebble, the death of the colourful mining magnate underscores every aspect of the Selebi trial. Cilliers painted a picture of Agliotti desperate to get out of jail and off charges for everything from tobacco smuggling to planting drugs and Kebble’s demise. And all along, loom the shadows of former close Kebble associates, particularly the fugitive John Stratton, and one-time Kebble security bosses Paul Stemmet (who once was a police reservist and may, along with Agliotti, have been a police informer) and Clinton Nassif. Agliotti testified that he refused to corroborate Nassif’s version of events over Kebble’s murder, after Nassif struck a deal with the Scorpions. No wonder. Nassif implied that Agliotti had paid for the killing. (Nassif is now state witness and up for indemnity.) Agliotti said he used Selebi’s name to obtain material benefit for himself. In what the defence characterised as a brand new lie, Agliotti said he lied about Nassif’s relationship with police and Selebi in order to get Nassif appointed to Kebble’s gang, after Kebble asked Agliotti to find him “a force to be reckoned with”.

In showing that Agliotti has many reasons to get himself off multiple hooks, Cilliers returned to the statement given by Nassif that Selebi got the full $1 million fee that Agliotti charged Kebble to bring the police commissioner “aboard”. Agliotti agreed with Cilliers that he only gave Selebi 5% or 6% of this amount, worth perhaps R720,000, and that Stratton said Selebi was not performing and wanted the money back. Agliotti then said most of the R12 or R13 million (at exchange rates at the time) went on renovating his personal properties, and that Kebble’s payments to him covered a much wider scope than just getting Selebi into Kebble’s pocket. But it also transpires that in paying Agliotti $1 million, Kebble’s old company JCI (and its somewhat cooked books) thought the amount a loan and not a fee, and still is trying to recoup the money from Agliotti.

Many questions remain. How many will be fully – and truthfully – answered is another question in itself. While the prosecution wants Agliotti to go for broke in convicting Selebi, Cilliers wants to prove Agliotti as unreliable, and guilty of fraud at front companies Misty Mountain and Spring Lights for personal gain. (It transpires in testimony that Misty Mountain did not have a bank account, but Spring Lights was the repository for some R26 million of Kebble money, of which only a fraction went to Selebi.)

All this over the arms deal, Mbeki and Zuma, and getting rid of the Scorpions. But what of the JCI fraud, where billions went missing? And what of the ANC? Expect another exciting installment in it-could-be-fiction-but-it-isn’t: the Selebi trial.