Dubai: Like sands through the hour glass so are the deb...

Dubai: Like sands through the hour glass so are the debts of our lives 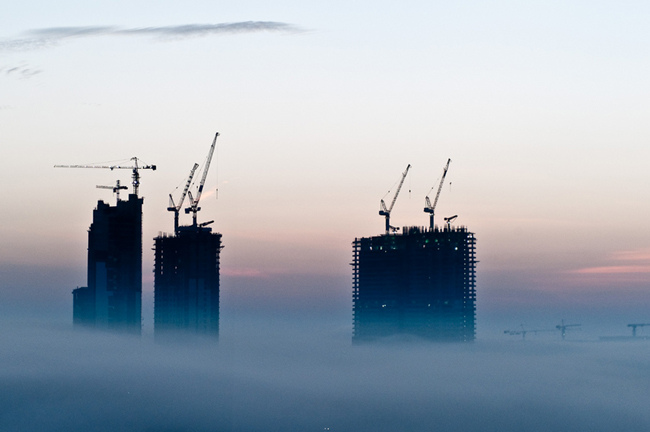 The global recession, and the sub-prime bust that caused it, exposed a newly-endangered species: miniature states that were punching above their weights. The  barely believable story of Iceland’s spectacular plunge into darkness and (relative) poverty will probably be seen as an appetiser for the next big flaming steak: name’s Dubai.

The reports came earlier this year that the newly poor expats were dumping their cars at the airport and getting the heck out of there. Whatever signs the world’s banks and brokerages missed on the way to ruination, the ordinary folk saw it coming long before the crash.

Now it’s official, Dubai is as good as bankrupt. The Associated Press reports that a fund created to help Dubai out of its debt hole lacks resources to cover the billions of dollars of debt coming due. No more than $4 billion remains in the fund, despite a $10 billion loan from Emirates cousin and sometimes less-glamorous neighbour, Abu Dhabi in February. The fantasy-land mentality that drove a building frenzy in the city-state is now a nightmare, from the iconic Burj Al Arab Hotel, to the development of the touted eighth wonder of the world, The Palm Dubai islands, and the unfinished construction of world’s tallest building, the Burj Dubai.

Ignore the Hong Kong-type skyscrapers that transformed the city’s coastline in a decade. That’s child’s play. The vision for the Burj Dubai alone was that it would include 30,000 homes, nine hotels, six acres of parkland, 19 residential towers, and the 12-hectare Burj Dubai Lake, all in one complex – at a bargain basement price of somewhere between $8 billion and $20 billion, depending on a range of factors from exchange rates to interest rates.

Abu Dhabi’s $10 billion loan barely covers the earliest estimate for this one project, and is a drop in the bucket compared with the $80 billion or so that Dubai owes its creditors. Some $50 billion in debt needs to be covered over the next three years, according to ratings agency Standard & Poor’s, but poor bookkeeping by government has left investors wondering how it will be repaid. On top of it, AP says Dubai wants to issue another $10 billion of bonds before the end of this year.

With the current estimated $4 billion left in the pot from the first such deal, this will barely cover state-owned property developer Nakheel’s debt of $3.5 billion due in December. There is much talk that Burj Dubai developer Emaar will merge with Nakheel, but Emaar’s planned link-up with three other Dubai state-run firms is currently with the regulators and, by latest accounts, is going nowhere slowly.

So what will happen to Dubai? At this moment, it’s anyone’s guess. Dubai’s ruler, Sheik Mohammed bin Rashid Al Maktoum, the visionary dynamo behind Dubai’s rise from sand, now sees the expectations resting on his shoulders and they might not be strong enough to save the city-state in its current shape. Unlike Abu Dhabi, Dubai doesn’t have oil and has to rely on its commercial hub status to generate the revenue. However, its terrific geographical, business and political positioning should make it too important for Abu Dhabi, the US and Saudi Arabia to let it fail. Another failed state at the entrance to the Persian Gulf is in no-one’s interest, except Al-Qaeda and, maybe, Iran. Our guess is that there will be a pronounced downturn period after which, although Sheik Al Maktoum will have the political power, the economy will be dominated by the oil-tycoons from Abu Dhabi. At least Dubai’s people can say it was really great while it lasted.