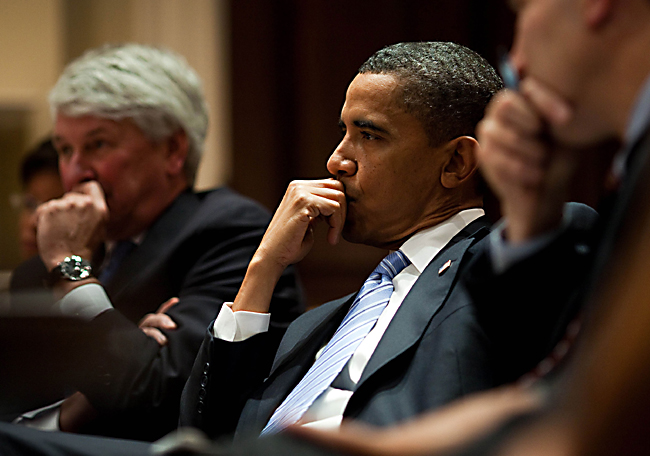 While it is not fair to blame Obama for all the world's problems (though right-wing talk show hosts and Iranian leaders keep trying) there is no question he is having some trouble closing the sale. This may be true even if he has been largely successful for the restoration of America’s reputation around the world, according to most recent international surveys.

In international affairs he is trying to carry out the playbook he outlined in his speeches in Berlin before the election, in his inaugural address and in speeches in Prague, Accra, Moscow and Cairo during his first international forays as president.  But, even in Copenhagen last week, his obvious personal popularity could not be directly transmuted into a win for Chicago to host the 2016 Olympics.

First, of course, is Afghanistan. Is there an achievable solution for the country? While more troops may not be the answer, withdrawal is not an option either, a White House spokesman has said. Perhaps vice president Joe Biden’s favoured option – focus on al-Qaeda in northwest Pakistan and strike a tacit deal with the Taliban in Afghanistan – may work. Or not.

In Pakistan itself, Obama is trying to motivate the government to neutralise militant fighters in their rugged, mountainous border sanctuaries. One familiar approach is to contribute US money as aid, but, even there, Pakistan’s military sees the proposed aid package of $1.5 billion a year for five years (and that’s a lot of money) as internal meddling. And then there is that small matter of ensuring a nuclear-armed Pakistan becomes a reliable ally against terrorism, rather than stampeding India into doing something unthinkable.

This is about as tough as stopping Iran from taking the final steps toward nuclear weapons – a goal Iran denies, but which most western nations now believe it’s trying to achieve. If Iran does not negotiate an acceptable settlement, its power to intimidate would grow, and might even be used, doubtless triggering an Israeli response. And speaking of Israel, there is that small matter of the Middle East conflict.

For example, Obama’s special Middle East envoy, George Mitchell, said he hoped his latest shuttle mission in the region would edge Israelis and Palestinians closer to reviving long-stalled peace talks soon, but no one is expecting any real movement at this point.

There are some apparent successes, however. Not least there is a faster-than-expected withdrawal of US troops from Iraq and a general rise in stability in the country. And North Korea has offered to resume negotiations over its nuclear weapons programme.

At the same time, US – China relations are on a generally upward climb as a result of efforts at “strategic reassurance” as Secretary of State Hillary Clinton termed them (despite some trade tensions and a growing nervousness by the Chinese about their massive holdings of dollars and US government bonds). China is playing a leading role in trying to get North Korean talks started again and Obama’s shelving of an anti-ballistic missile system in the Czech Republic and Poland has improved relations with Russia and helped bring them to the party vis-à-vis Iran.  But for Obama, as with all presidents, governing is a lot tougher than campaigning.

However, the Nobel Peace Prize committee has obviously been enormously attracted to Obama’s promise and his efforts so far by awarding the coveted prize to him for his initiatives – and encouraging other nations to follow his lead.