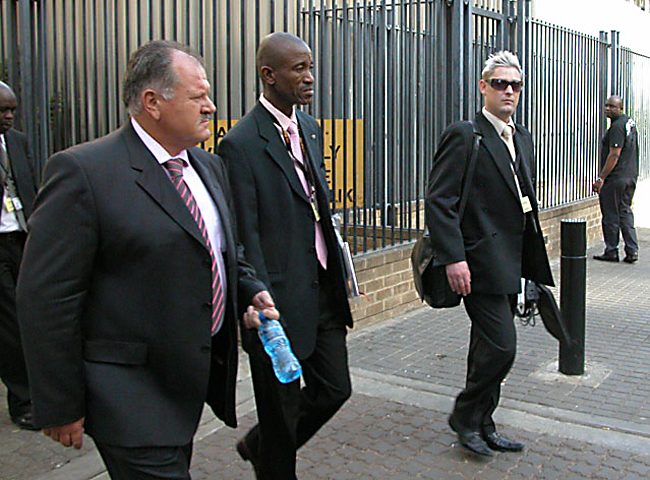 In another day of high drama at the South Gauteng High Court, the defence tarred and feathered the press over leaked documents implicating Jackie Selebi in corruption, Glenn Agliotti shed tears and a laughing Selebi told media: "He will need a box of tissues for tomorrow."

Jackie Selebi’s team got Glenn Agliotti to draw a picture of a hugely factionalised Mbeki government. We heard of conspiracies supposedly cooked up by Bulelani Ncguka and Leonard McCarthy when they presided over the National Prosecuting Authority and the crime-fighting Scorpions respectively. The impression left was one of deep enmity between police, intelligence agencies, the Scorpions and the NPA.

But it was the death of Brett Kebble that took centre stage in the dimly-lit courtroom. Selebi defence counsel Jaap Cilliers said it was absurd that Agliotti was the only person charged in the suspected murder of the mining magnate when fingers pointed to former Kebble security boss Clinton Nassif, and three others, who had turned state witnesses. The defence said those suspects had been promised indemnity if they implicated both Agliotti and Selebi in a generally corrupt relationship.

Agliotti readily agreed that a McCarthy-inspired depiction of him as “the biggest gangster the country has ever seen” was part of a media frenzy that implicated Jackie Selebi in corruption. He then denied he had paid Selebi to turn a blind eye to his possible role in a R80-million mandrax shipment for which the NPA wanted him investigated, buttressing earlier claims that he had assisted the police instead.

Agliotti testified that in trying to protect his friend Selebi from Ncguka and McCarthy, he had started telling crime and intelligence agencies what they wanted to hear. He later recanted on his statements. Again, the witness and the accused didn’t even glance at each other throughout the tense session, but testimony was far friendlier than a few days ago, premised on Agliotti’s statement that he and Kebble believed there was a political conspiracy against the former top cop who had wanted to dissolve the Scorpions.

A calm and apparently respectful Agliotti said Selebi had showed him the content of three official reports, one related to British police enquiries about his various international drug dealings. “I made payments to the accused firstly because we were friends, but I needed him close to me in my business with the Kebbles,” Agliotti said. Days earlier he admitted he had paid Selebi about R1-million out of $1-million he got from the Kebbles to introduce the two parties, and wanted to ensure he continued to play a lucrative role.

He implied the intelligence services and the NPA were involved in a macho standoff over who really ran South African justice, and that by this stage he was trying to do deals so “that we wouldn’t be standing here today”. Mention was then made of a letter on an official letterhead sent by Ncguka to the then-fugitive businessman Billy Rautenbach, that may have been intended to smooth the way for Rautenbach to turn state witness. Rautenbach recently agreed to pay R40-million to have the NPA drop 326 charges against him. But the defence claims that the letter never had an official reference number and was an attempt by Ncguka to solicit a bribe from Rautenbach and pursue mining rights in the Democratic Republic of Congo and Zimbabwe, where Rautenbach’s friends included former DRC President Laurent Kabila and Robert Mugabe, and implying that Ncguka may have been offering to drop charges against Rautenbach for personal gain.

Agliotti said Selebi took a great interest in this letter, and was more interested in what he called the “abuse of office” by Ncguka than in getting Rautenbach off the hook, and checking whether Interpol had issued an arrest warrant against him. Agliotti in earlier testimony said he had paid Selebi $30,000 of $100,000 given to him by Rautenbach to look into these issues. But the defence implied that Selebi suspected Ncguka was controlled by international security advisers Kroll and British intelligence, and that South African intelligence and the government were worried Ncguka was controlled by foreign agencies, including the CIA, who were blackmailing him over a plot to unseat Jacob Zuma.

Agliotti said Kebble hated Ncguka’s wife Phumzile, then minister of minerals and energy, because he believed she was trying to control South African mining. This led to testimony that former NPA head Vusi Pikoli’s wife held R20-million of free shares in one of Kebble’s companies, Simmer & Jack, through an empowerment holding company. In the absence of documentation in this regard, Judge Meyer Joffe said he regarded the testimony as hearsay, with a call to substantiate such allegations as the trial progresses.

What seems clear in this miasma of inter-familial dealings, is that Kebble had dirt on all sorts of people who held high office in a hugely factionalised Mbeki government. In his plea, Selebi said he had called Pikoli into his office to explain his wife’s apparent financial links with Kebble, and Ncguka’s allegedly improper dealings with Rautenbach. According to Selebi, Pikoli became “very emotional about the issue, and stated that his wife is his ‘Achilles heel'”. Pikoli then claimed he had no knowledge of Ncguka’s alleged dealings with Rautenbach.

Selebi said he believed it was this confrontation and the subsequent initiation of a crime intelligence investigation into Ncguka and Pikoli that prompted the corruption case against him. Pikoli’s attorney denied this and said Pikoli said the alleged meeting never took place.