UK Conservatives offer nothing but blood, toil, tears, and sweat 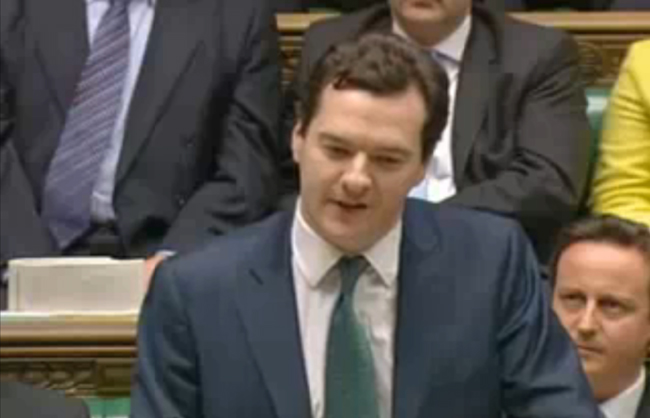 Conservative Party, Shadow Chancellor of the Exchequer, George Osborne’s speech at his party’s annual convention in Manchester this week has promised major budgetary cuts if the Tories come to power next year.

Setting out this agenda of tough love, Osborne’s speech aimed to answer criticism from opposition parties that the Tories have been long on vision but short on details as they target Labour in an election that must take place no later than June 2010. Osborne took the gamble of publicly proposing painful and extensive public spending cuts — before the election — because, as he said, the Conservatives shouldn’t be elected on a “false prospectus”.

Osborne explained it would not be worth winning the election without being honest in advance about the need for these cuts because any party without a mandate for reform would not be able to govern properly. Osborne’s plans include a one-year pay freeze for 5 million public sector workers, deferral of the state pension by a year and slashing tax credits for the middle class.

Speaking on BBC Radio 4’s “Today” programme, Osborne explained why he had taken the highly unusual decision to give his version of the “blood, toil, tears, and sweat” speech, saying, “Whoever wins the election is going to have to take these choices … Whoever tells you otherwise is, frankly, lying to you… If you won an election in the current economic climate on a false prospectus, it would not be worth governing because you would become so distrusted, so unpopular, so quickly, that you would not actually be able to take the country through the economic change that is necessary.”

British political analysts say his speech may come to decide the outcome of the election. Osborne repeatedly used party leader David Cameron’s slogan – “We are all in this together” – to ask the nation to make a collective sacrifice in which everyone but the poorest would have to contribute to reduce “the largest deficit in our modern history”.

Parties rarely tell voters they are going to punish them – before getting their votes.  If this works, you may see a whole new “punishment and pain are good” electoral strategy emerge in democratic societies.

Osborne told his party faithful in Manchester that Britain was entering a new political era where there would be a premium on candour. As he said,  “These are the honest choices in the world in which we live. Anyone who tells you these choices can be avoided is not telling the truth.”

These measures are spending cuts of more than £23billion, but Robert Chote, director of the Institute of Fiscal Studies, said the cuts were just a “dent” of 15% of the way if the goal was to more than halve the deficit by 2014.

Osborne’s promised public service pay freeze, not surprisingly, was sharply criticised by public sector unions. Despite these stringent measures, Tory leaders privately acknowledged that even a carefully-targeted pay freeze risked alienating millions of teachers and nurses (and presumably losing their votes), angry that they will be the ones to draw the pain because of bankers’ mistakes.

Or as the BBC’s Jeremy Paxman commented online, “We’ll also be interrogating the shadow chancellor, George Osborne, about his ‘Plan to Save The World’. You’ll recall that he’s already told over four million people they’ll be worse off if the Conservatives win, so that seems worth a good 10 minutes or so…”