Tshwane/Pretoria: Is FIFA a referee in the capital name dispute? 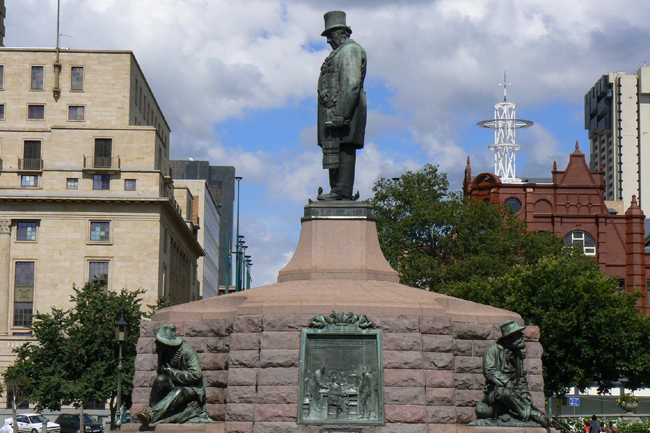 Arguments are raging in the North Gauteng High Court about the name of the country's capital, and why some signs should say Tshwane/Pretoria while others only say Tshwane. Only the responsible party isn't in the room.

This was supposed to take just a couple of hours, but after the usual delays related to the running of a motion court, things hit another snag. The Freedom Front Plus’ advocate, Quintus Pelser, brought up the elephant in the room. “Where is the minister?” he asked. He was pointing out that it really is the Arts and Culture department that makes the final decision in these cases.

The city’s advocate, Vincent Maleka (an A-list advocate, and perhaps an indication of how seriously the council takes this case), was having none of it. This was just about the World Cup, and not a final argument about the name of the capital, he said.

But this is just a skirmish in what could turn in to a full scale war next year. It’s then that the final argument will be heard on whether the council can actually call the city “Tshwane”. Until recently there wouldn’t have been much room for debate after the council made that decision, but these days their power to implement the change seems limited.

What has changed? The ANC’s attitude to name changes. Perhaps the party is just tired of raging arguments about the names of hospitals and airports when there are, quite frankly, bigger fish to fry.

What is clear is that the capital’s mayor, Gwen Ramakgopa, is caught between a rock on a hard place. One the one hand there’s a clear desire to change the name from Pretoria once and for all. On the other, the fact that this decision is really up to the Arts and Culture Minister. Pallo Jordan used to quite enjoy a good change of name. But Louis Trichard changed all that. The name of that town was changed, through a process, to Makhado. Then the Supreme Court of Appeal ordered it to be changed back. The main issue was a lack of consultation. Judges in Bloemfontein ruled that running one advertisement in one newspaper simply wasn’t what the constitution defined as “proper consultation”. As a result, the signs were all changed back.

That seems to have cooled some heads in the ANC. Things have moved on since Mosuia Lekota said “Pretoria sal Pretoria bly” (“Pretoria will stay Pretoria”) six years ago. But the Jacob Zuma ANC doesn’t want any big arguments about national identity just now. It’s too busy with improving conditions on the ground, and helping its voters (or so it seems). It’s also learnt that while arguments over changing the name of a street in Durban is one thing, changing the name of a city, or a capital, is another.

But there’s a bigger problem. To change the names of cities means that the Arts and Culture Minister has to appear in public, make a decision, and answer questions. Lulu Xingwana simply has too much trouble hanging around her to do that. Any press conference on the issue would be overflowing with land correspondents asking questions about her previous tenure. And her deputy wouldn’t help much. His name is Paul Mashatile, in which case “Alex Mafia” experts would be on his case.

As a result, expect the Tshwane/Pretoria case to go before the courts again. And again.